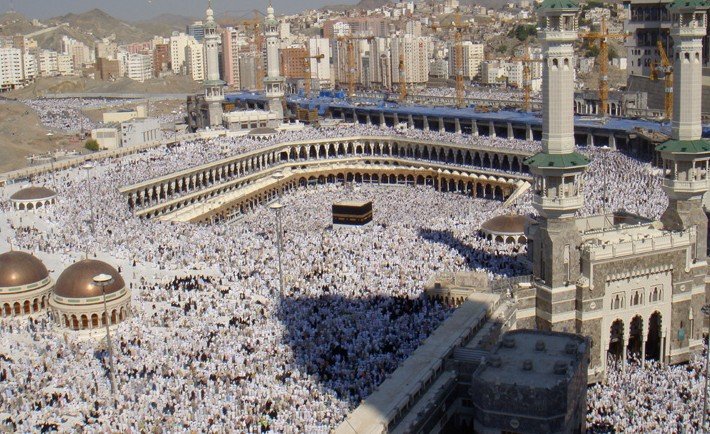 It’s an occasion when millions of pilgrims from around the world visit Makkah to complete one of the five pillars of Islam.

This pilgrimage involves visiting different locations within and around Makkah during different days of the month of Dhul Hijjah for Hajj to be accepted. Here are the locations and their significance. 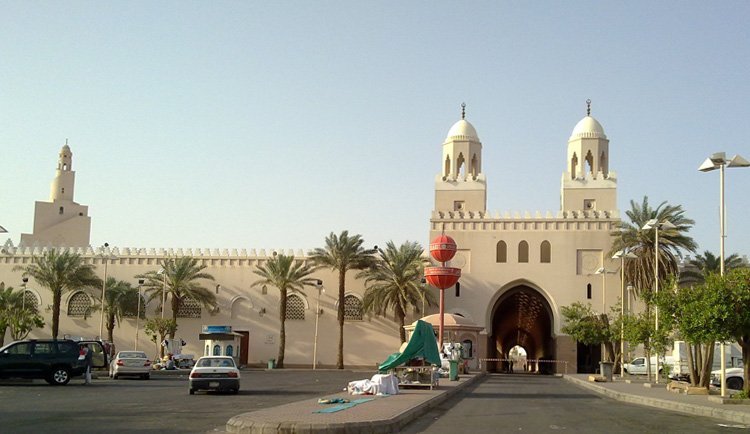 The Miqat Mosque, also called Aaba Ali, is the station for pilgrims from Madinah and for pilgrims passing through it. At this place, they wear their ihram and make the intention to perform Hajj. This mosque has many names, such as Miqat, Aaba Ali, Al-Shajarah Mosque (tree mosque) and Al-Mu’ris Mosque.

The mosque is located within the Aqeeq Valley and is 14 kilometers away from the Masjid Al Nabwi. The mosque was built by the Umar bin Abdulaziz (pbuh) renewed during the Abbassid and Ottoman eras. It was very small at that time and built with mud and stones, until the late King Abdul Aziz ordered it to be expanded and renewed.The mosque can now accommodate up to 5,000 people and is on a space of about 6,000 sq. meters.

There are various other meeqat points that vary depending on the place you are entering the miqat region from. For those living in Jeddah they don’t have to go to a particular border to wear the ihram. They can wear it directly from their homes as the city is located within the miqat region. 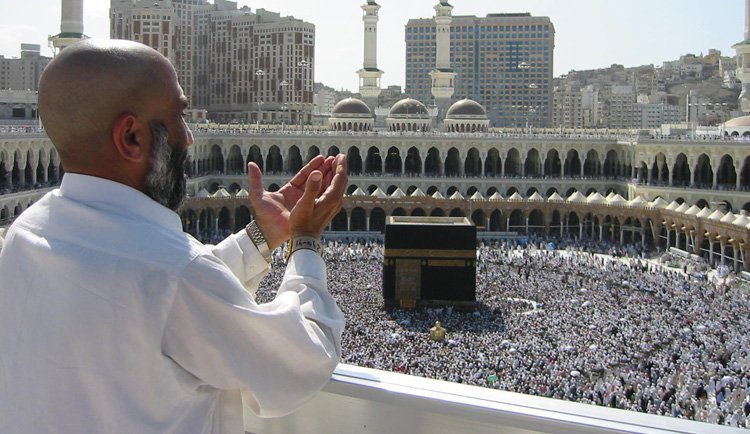 330 meters above sea level, this is the holiest site in Islam and it the place where pilgrims need to perform Umrah before heading off to Mina (unless they’re doing Hajj Ifrad). This Masjid is where the Holy Ka’bah resides and Muslims around the world pray towards.

The present structure was built by Ibrahim (pbuh) and his son Ismail (pbuh), the first mosque to be built for the people of Earth. It was then rebuilt by the Amalekites, then by Jurham, then by Qusayy ibn Kilaab. It was rebuilt by the Quraysh during the time of Prophet Muhammad (PBUH) as well. They began to rebuild it with the stones of the valley, which the Quraysh carried on their shoulder. 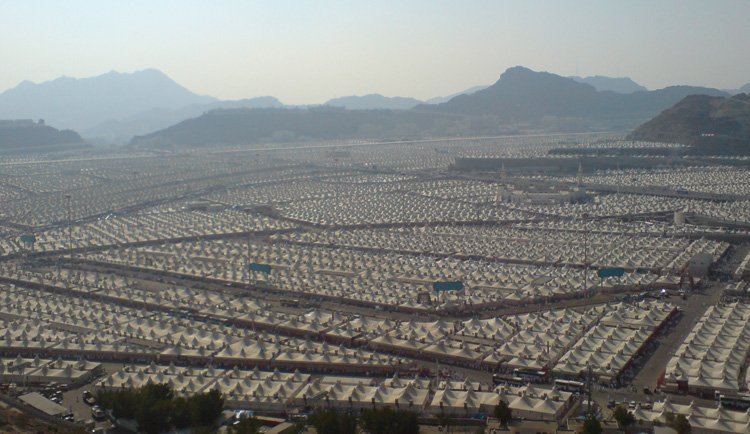 Mina is located 7 km east of the Masjid al-Haram. It is where Hajj pilgrims sleep overnight on the 8th, 11th, 12th (and some even on the 13th) of Dhul Hijjah. It contains the Jamarat, the three stone pillars which are pelted by pilgrims as part of the rituals of Hajj.

The meaning of the word ‘Mina’ is ‘to flow’ because this is where the blood of sacrificial animals flows during the day of Eid-ul-Adha. This is where Ibrahim (PBUH) was commanded by Allah to sacrifice his own son, Ismail (PBUH). Being pious and virtuous believers in Allah, they both agreed. While Ismail (PBUH) was being sacrificed, Allah replaces him with a lamb, a miracle of Allah. Hence, pilgrims are asked to sacrifice an animal during this time of the year and distribute the meat to charity. This story teaches Muslims the importance of sacrifice and how to listen to the commands of Allah no matter how difficult the task.

There also lies a cave in Mina known as the ‘Cave of Mursalaat’ as this was where the Prophet (PBUH) was when Surah Mursalaat was revealed to him. 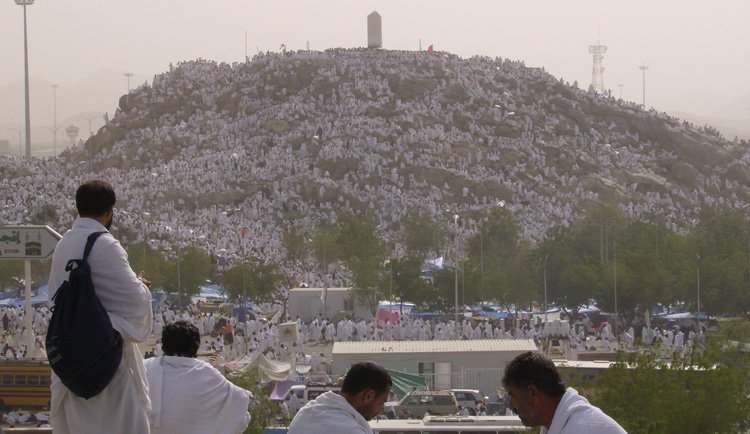 The day of Arafah is considered the most important day of Hajj, if missed by pilgrims, it’s considered as if to have missed the whole Hajj. There are different opinionated references by scholars behind its names and they are as follows:

After staying in Mina, they begin their journey to Arafat, which is located a few kilometers away. They chant ‘Labbaik’ while marching to Arafat. The whole chant translates to, “Here I am in Your service, O Allah, here I am. Here I am, You have no partner, here I am. Verily all praise and blessings are Yours, and all sovereignty, You have no partner.” This chanting represents the purpose of this whole journey that is to serve Allah and worship Him and Him alone.

Once they reach Arafat, they take their places in their pre-assigned camps and wait until the call for the prayer is announced. The front part of the mosque in Arafat is actually outside the boundaries of Arafah and is where Prophet Muhammad (PBUH) had delivered his sermon. When he finished delivering the sermon, the Messenger (PBUH) lead the hajj congregation in combined prayer between Dhuhr and Asr, then he moved inside the plains of Arafah until the end of the day.

So, when the time for prayer approaches, the Imam who delivers the sermon stands to remind the congregation who gathered in Masjid Namira and the surrounding areas with what is known as the sermon of Arafah. The adhan or call for the prayer is then announced, the Imam then leads the congregation in Dhuhr and Asr prayer combined and shortened, each performed in units of two rak’ah with one adhan and two Iqamas.

Once the prayer finishes, the pilgrims move back to their camps. They have to stay within the boundaries of Arafah which are marked by huge yellow billboards all around. The pilgrims are obligated to stay in Arafah until sunset. Anyone who fails staying there risks invalidating his entire Hajj.

Once the day ends, and right at sunset the pilgrims start heading back towards Mina. On their way to Mina there will be one stop for the night, the plains of Muzdalifah. 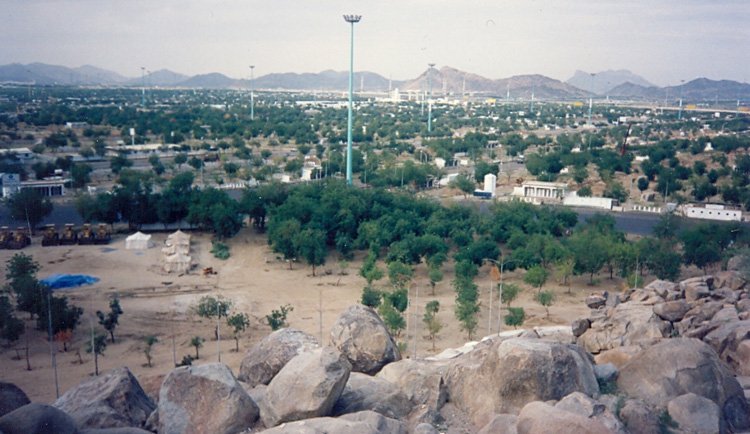 This is where Hajj pilgrims arrive after sunset from Arafat on the 9th Dhul Hijjah (second day of Hajj).

Muzdalifah stretches from the Valley of Muhassar to the mountains of Ma’zamayn. It is 4 km long and covers an area of 12.25 sq. km.

During Hajj It is obligatory to perform Maghrib and Isha together in Muzdalifah at Isha time. Staying at Muzdalifah is also obligatory. Although pebbles for pelting the Jamarat may be collected from anywhere, most pilgrims collect them from Muzdalifah. Muzdalifah is also called ‘Jam’ as it is a place where people gather.