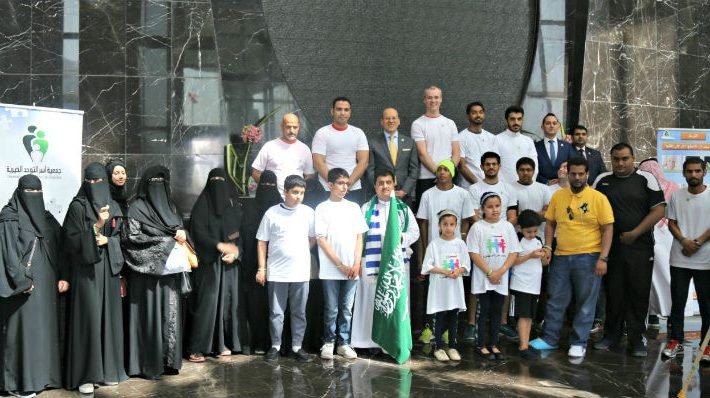 Four Seasons Hotel Riyadh launched an awareness campaign for Autism in collaboration with the Kingdom Center as part of their social commitments. The campaign began with a press conference held on the 21st of March which was attended by Mr. Ahmed Al Yahya, Executive Director of the King Salman Center for Disabilities Research and member of the Board of Directors of the Charitable Association of Autism Families, along with specialists from the Charitable Association of Autism Families. The press conference was opened by Mr. Rolf Lippuner, General Manager of Four Seasons Hotel Riyadh, Mr. Tariq Bekheit, Regional Director of Marketing, and from the Kingdom Centre Mr. Abdulaziz Alghshayan, Marketing & Specialty Leasing Manager. After that attendees and media professionals were granted the chance to ask questions about autism in order to learn more on autism and pass on their knowledge.

The campaign also featured a charity tower run “Run of Hope” that took place on the 2nd of April in honor of World Awareness Day. This activation was attended by Her Royal Highness Princess Samira bint Abdullah Al-Faisal Al-Farhan Al-Saud, Chairperson of the Board of Directors of the Charitable Association of Autism Families along with members of the Association, and different families and volunteers including Four Seasons Hotel and Kingdom Centre employees. The aim of this activity is to raise awareness on autism throughout the community as well as to encourage early diagnosis and intervention.

Finally, and more importantly, this event aims to show support and encourage the unique talents and skills of autistic children and make them feel embraced within our society. This event has achieved a remarkable turnout that was expressed by everyone that attended. In addition, management of the Kingdom Center lit the Kingdom tower in blue; which is the color representing Autism, as a symbol of unity.

World Autism Awareness Day was declared by the United Nations in 2007 to pay tribute to individuals and families around the world touched by autism, a group of complex developmental brain disorders. In December 2012, the United Nations General Assembly unanimously passed a new resolution encouraging governments to take urgent action to improve access to long-term healthcare, education, training and intervention programs for persons with autism spectrum disorders (ASD), developmental disorders (DD), and associated disabilities, at local, national and international levels.

The Four Seasons Hotel Riyadh and the Kingdom Center developed this awareness campaign for Autism in the context of their keenness to always contribute to all activities aimed at helping the community.  They aim to always play a positive role in their social responsibilities, while they continue to support various health, environmental and educational activities