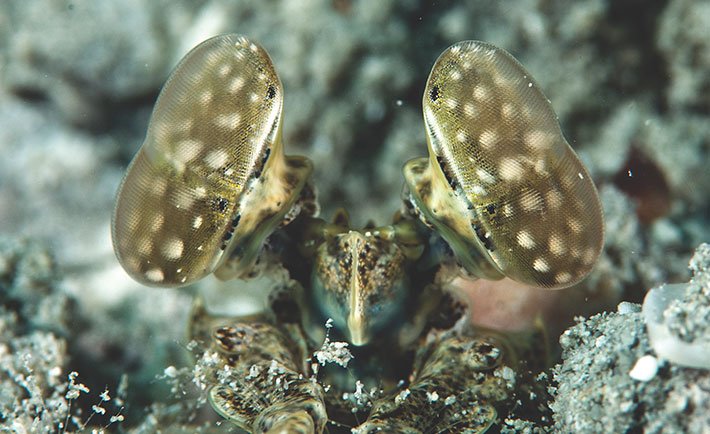 Do you remember Bruce Lee’s famous 1-inch punch? With a hand movement of just an inch Bruce Lee was able to knock down an opponent. Well, the Red Sea has its own cast of martial artists with expertise in both offense and defense, seriously!

The reef and seafloor are full of holes, nooks and crannies; these provide shelter for some, and a place to search for a meal for others. Hovering motionless near the sea floor or along a reef wall allows a buoyant diver a vantage point to spot these benthic denizens.

The Mantis Shrimp is a heavily armored shellfish that can grow up to 38cm long. The Club mantis may reach 10cm, but is seldom seen since it is well camouflaged and buries itself in holes on the sea bottom. The mantis has decorated armor plating along its body and on its appendages; once insid eits burrow, it cleverly uses these plates to hold back the sand while it disguises the entrance to its shelter, making it invisible to even the most experienced diver. 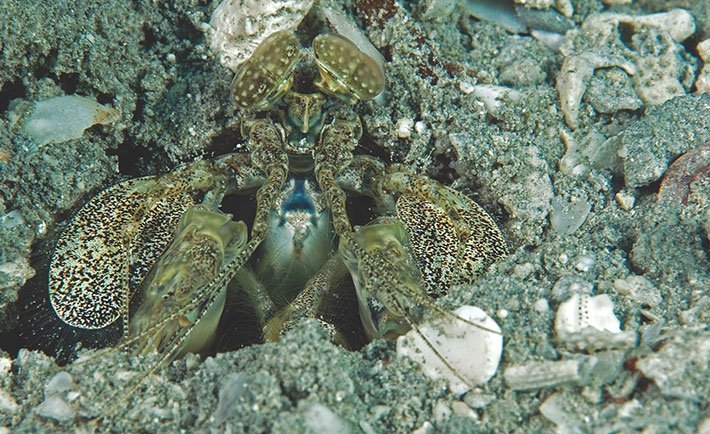 Mantis shrimps are ambush predators; they rely on keen eyesight to spot prey. They can see objects with three different parts of the same eye, and the eyes can move independently of each other. The eyes themselves are on stalks extending upwards like a submarine periscope which allow the mantis shrimp to size up prey, predators and competition from the comfort of their burrow.

Mantis Shrimps are most famous for their powerful forearms which they use to strike prey into submission. When scaled to size, the force of the blow equals the force of a rifle bullet! These large raptorial claws are forward folding like the arms of a praying mantis, and are designed for either smashing or spearing prey or adversaries.

Skeletons from rival mantis are scattered around their burrows along with fragments of smashed crab/snail shells. The mantis shrimp forelimb strike is one of the fastest movements known in the animal kingdom – they can even crack the glass in aquariums! 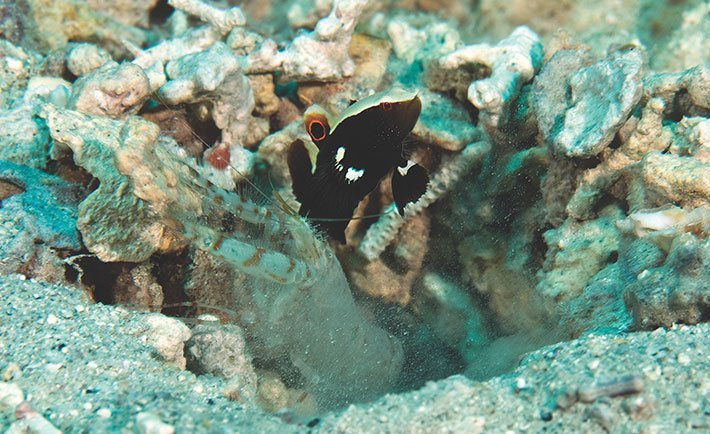 Get too close with an underwater camera and you may end up with a broken lens port. They are also known as thumb splitters, so keep a respectful distance; these underwater tough guys will defend themselves if they feel threatened.

The TaiChi Shrimp And Its Energy Blast

Snapping Shrimps, also known as Pistol Shrimps of the family Alpheidae are characterized by their asymmetrical claws, the larger of which is capable of producing a loud snapping sound. They are one of the loudest sea animals. Their claws contain a pistollike feature made of two parts which allows the hammer type part to lock backward into a right-angled position. When released, it snaps forward, emitting an enormously powerful energy pulse capable of stunning prey. 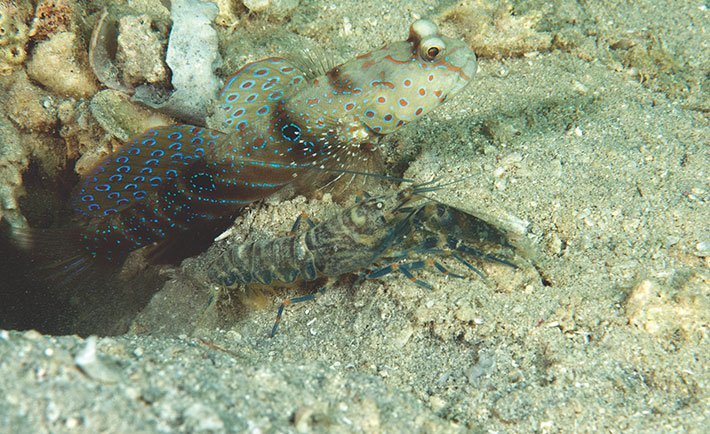 Know of any other such fascinating creatures of the Red Sea, let us know in comments below and we will probably do a feature on it.