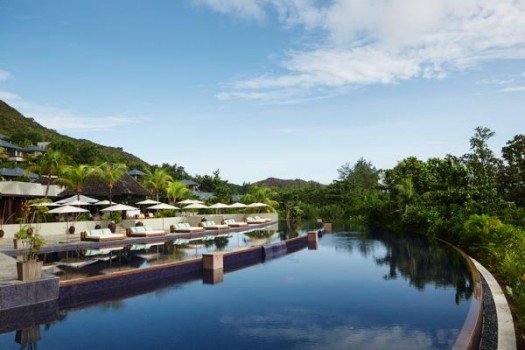 Seychelles Islands are a haven for those who revere nature and desire relaxation. We at Destination Magazine were lucky enough to experience the islands and witness their splendor first hand.

They are the most ancient mid-ocean islands in the world. They make up an archipelago in the Indian Ocean, northeast of Madagascar. We at Destination reached Mahe’, the main island, which is four hours from Dubai. The airport in Mahe’ immediately gave off an island vibe since it was small and covered with palm trees; it did indeed feel like a cozy island on its own.

From there, we took a small plane to Praslin, the second largest island at Seychelles. The crystal clear water with little patches of land seemed unreal below us. Praslin’s airport is also quite tiny; it overlooks the shore, so stepping out of it made us long for a dive right there.

On our way to the Raffles Praslin Seychelles hotel, we marveled at the island’s artistic milieu and noticed how utilities were basic since electricity is used at low voltage. You will not find air conditioning or bright lights. No jet skis are available in an effort to protect the marine environment. There are no sprawling shopping centers so a peaceful mindset can be maintained. After all we were on a mission to escape the city’s hustle and bustle.

We arrived at Raffles Praslin Seychelles hotel, which is part of the luxurious, and award-winning Raffles Hotels and Resorts Company. The hotel contains 86 villas, all with private plunge pools. Thirty of those overlook the ocean, and we grabbed one of them. Each villa also contains an open-air balcony with sundeck beds and an outdoor sheltered pavilion with a day bed and dining table.

The hotel offers a wide variety of facilities; one of the best is the Raffles Spa, which is the largest spa in Seychelles. It promises an enchanting and harmonious experience and does not fail to deliver. The lavish spa features 13 treatment pavilions, each showcasing the spectacular view of the ocean, it also has two spa suites with steam showers and soaking tubs, along with observation decks where guests can practice yoga or pilates. A gym with the latest equipment is also available along with a two infinity pools that would be great for a late night dip under a curtain of stars.

The hotel also showcases several restaurants, including Losean restaurant for contemporary Mediterranean cuisine. The Curieuse restaurant specializes in Pan Asian cuisine with Indian, Chinese and Tai food. There is also the Pool Restaurant & Bar, which is Praslin’s best destination for Creole cuisine, such as the gumbo or jambalaya. All that is topped by the private dining at a location of any choice. We picked the pool to have our lunch of Arabian food especially made for us, ranging from rice, vegetables to chicken and meat.

The King Of Beaches

After lunch, we went to the sublime Anse Lazio (Anse meaning bay), which is one of the top 10 beaches of the world, and is considered the king of Praslin beaches as it is ranked third of all the island beaches. It’s curved like a crescent with unique granite rocks framing both ends and is surrounded by local Takamaka trees.The clear turquoise water is bound to overcome you with a sense of serenity. Anse Lazio is the perfect place to sun bathe and take a stroll.The next day was just as captivating and maybe even more so. At first we had our continental breakfast on the seashore as we were surrounded by a canvas multiple shades of greenery, and the long bright blue extension of the ocean ahead of us. The hotel’s beachfront Anse Takamaka we kayaked, snorkeled and beach golfed.

That area is also a designated Marine National Park. The sea life is an astonishing collection of parrotfish, angelfish, puffer fish and moray eels and other sea creatures.

We spent the next day in nature’s embrace as we took a guided excursion to Vallée de Mai, the nature park reserve and UNESCO World Heritage Site. Our tour guide was a friendly local who has been a guide for 25 years. She told us she could not imagine doing anything else other than helping people discover the wonders of her country. After seeing this forest we completely understood her point of view.

The forest comes right out of a movie set, with leaves as tall as a people, trees that appear to reach the sky, and sounds of birds chirping. It is also home to the coco de mer fruit, which is the bearer of the largest nut in the world and is expensive. It holds the record for the largest fruit recorded at 42kg. Its mature seeds can weigh up to 17.6kg and are the world’s heaviest. Vallée de Mai includes five palm tree species that all grow together in the same place, a rare occurrence in itself; it also houses mango and cinnamon trees along with a rare type of orchid. Vallée de Mai shelters small- to medium-sized animals like the endangered black parrot, which is restricted to Praslin Island, the Seychelles tree frog, and the rare Seychelles sheath-tailed bat.

Curieuse Island, a little piece of heaven, is only a few minutes away from Praslin by ferry. Curieuse is the dwelling place of the Aldabra Giant tortoises, which live on the shore. We had the chance to feed them and take pictures. Whoever thinks they are silent animals is mistaken. They produced shrieks that sounded almost prehistoric. The fun on Curieuse Island continued as we played soccer with some of the locals there since one of the members of our group is a huge soccer fan and initiated a soccer match.

On our last day we took the 15-minute ferry from Prasilin to La Digue Island, the third most inhabited island in Seychelles. Colorful ox-carts can be hired as transportation throughout the island. But we recommend biking around the island because it is better to explore its allure. The Veuve Nature Reserve lies at the island’s interior. It is home to the rare black paradise flycatcher bird, of which there are only about 100 in existence. We also circled La Digue’s tallest peak of 300 meters, Belle Vue, which is in the central part of the island.

One of our favorite events was biking through a vast vanilla plantation. Vanilla is one of La Digue’s economic resources and exports. The markets nearby sell intoxicating vanilla. One landmark on the island is the 19th Century French colonial-styled house once owned by the Hossen family from Mauritius. The house is now a museum open to public.

The island is also known for manufacturing coconut oil and has one of the last working copra (dried coconut) mills that display the traditional method of extracting coconut oil. Visitors can purchase fresh oil. there Coconuts are abundant on the island, but don’t get your coconut juice until you hit the beach because that’s where it is most deliciously served. Drinking it as you lie on the beach is also an added benefit since La Digue’s beaches are simply exquisite with strokes of blue and green enveloping everyone. The beaches have been venues for several wedding ceremonies. You may find a couple’s name carved into a granite rock nearby.

Seychelles Islands are a true gift of nature making this traveling experience one to remember.