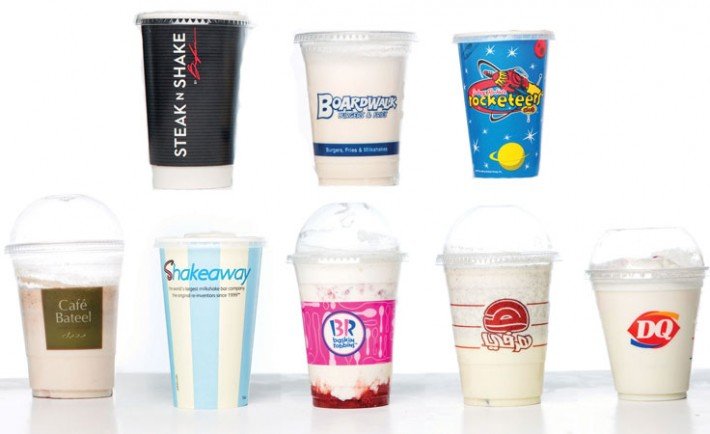 Beat the summer heat with the best shakes in the city.

Steak and Shake
Intersection of Dabbab and Thalatheen St.
The newest contender in town, Steak and Shake has a lot to live up to. From what we’ve heard, the steak burgers are doing okay, but we’ve got to admit the shakes are doing better. And the diner interior is nothing to slouch at.

Boardwalk
Takhassussi St.
A big part of us believe that they pretty much buy their ice cream from Baskin Robbins, but we have to give them credit for making thick minimalistic shakes that are great, especially paired with their fries. Well it should be, right? Considering they call themselves a burger, fries and shake joint.

Johnny Rockets
Tahliya St.
This franchise has a reputation to uphold. At a time when hand-scooped shakes weren’t a thing, Johnny Rockets had them. The team swears by the chocolate peanut butter concoction. In our opinion, Johnny Rockets’ shakes are best consumed in the diner ambience. It just adds to the whole 50’s feel.

Bateel
Tahliya St.
This original Saudi café that has gone global has one of the most interesting locally gourmet menus we’ve seen. The Bateel date shake makes us happy. They’re made from vanilla ice cream, milk and rhutab dates.  Sings, “I’m so fancy, can’t you taste this gold?”

Shakeaway
Riyadh Gallery
Meet Dave and Janet. They’re the most raved about couple on the menu. Shakeaway gives you a cool landscape to explore, having everything from localized flavors, smoothies, energy shakes and oh yes, the coveted Millionaire shake with actual gold shavings.

Baskin Robbins
Everywhere
Ah, how can we not put this on the list? This ice cream parlor has been around for ages. The caramel is a best seller, and while you can just choose from their shake board, we tend to mix and match flavors ourselves. If soft serve isn’t your thing and you want unadulterated thick ice creamy shakes, head on here.

Herfy’s Milkshake
Everywhere
Herfy’s milkshake deserves a lifetime achievement award. It has survived inflation, priced at SR 8. We used to connive with the bus driver to pass by Herfy. You were playground royal if you were sipping on (the then) SR 3 melted milkshake. Now apparently, cool kids drink Starbucks. Ho-hum. Tsk.

Dairy Queen
Tahliya St. / Um Al Hammam
The world knows DQ for its ice cream. Their basic flavors tends to get buried underneath all the blizzards, cookie sandwiches and whatnot but we say, don’t forego their shakes just yet. If you like slurping soft-serve, DQ is a good choice– or you can buy soft-serve for SR 3 and leave it out in a cup for five minutes. Same result.