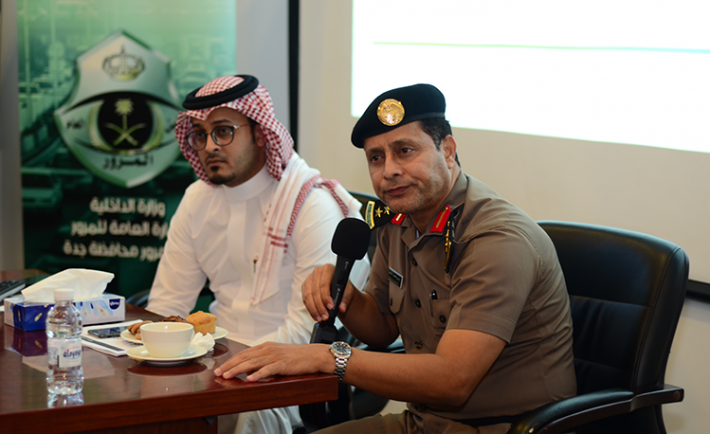 SEDCO Holding organized an awareness lecture on traffic regulations and violations for the Group’s employees in collaboration with Jeddah Traffic Department on Tuesday October 2, 2018 with the aim of enriching their knowledge of traffic laws and regulations as well as increasing their awareness of the importance of following them, and the consequences of their violations.

Col. Zaid Mohammad Al-Hamzi, Head of Public Relations at the Traffic Department in Jeddah, explained that the lecture comes within the efforts of the Ministry of the Interior represented by the General Directorate of Traffic to enhance road traffic culture of citizens and residents in the Kingdom and encourage them to abide by the traffic regulations and avoid their violations, which will curb road traffic accidents, limit traffic congestion and other negative traffic phenomena. 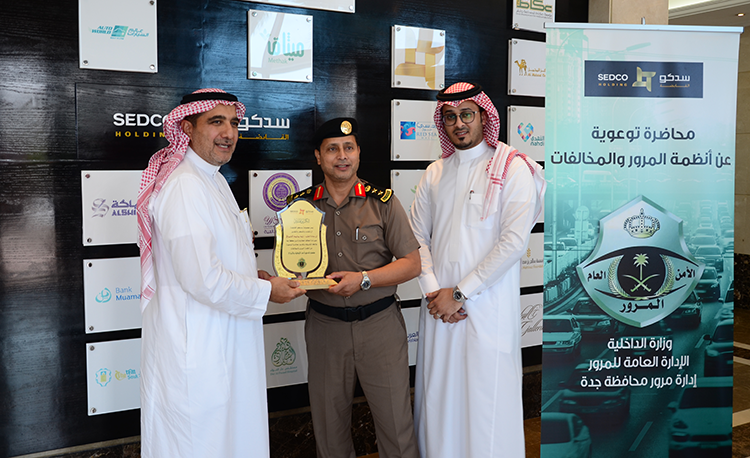 From his side, Amro Jamil Kandil, VP of Human Resources at SEDCO said that the Group is committed to providing the team with everything that will enhance their sense of responsibility and belonging to the community, including increasing their awareness and ways of thinking when it comes to driving a vehicle as they are confident that this initiative will pay off.

Abdullah Ali Al-Ghamdi, Support Services Manager at SEDCO and the lecture organizer appreciated the visit of Colonel Zaid and presenting the lecture about raising awareness of traffic safety, in addition to explaining traffic regulations and violations in detail as well as answering all inquiries of the attendees.

At the end of the presentation, Amro Kandil and Abdullah Al-Ghamdi awarded Jeddah Traffic Department with commemorative shields on behalf of SEDCO Holding Group.

SEDCO, the Saudi Economic and Development Company, is a leading private wealth management organization that conducts its business according to Islamic guidelines widely known as Shari’ah. SEDCO was established in 1976. It manages a wide and diversified spectrum of real estate investments, investments in equities, and other businesses in Saudi Arabia and around the world. It is located in the Red Sea Mall building, Kings Road, Jeddah, Saudi Arabia. Its investee companies have more than 6,000 employees. SEDCO Holding Group mainly operates through three lines of business: direct investment, real estate investments, and financial investments. Direct investments are in multiple sectors and industries, including real estate, pharmaceuticals, automobile leasing, travel and tourism, hospitality and casual dining in Saudi Arabia and around the world