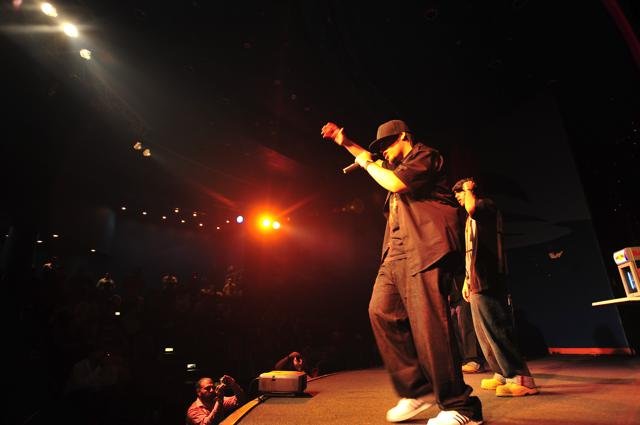 Hip-hop arose in Saudi Arabia between 2000 and 2001. The globalization of the Internet and the growth of Internet users in the region point out a small sign of slight liberalism and openness to Western culture.

No matter how conservative the Kingdom is, contemporary rappers and their explicit lyrics reached even quicker than ever before. Saudi youth previously relied on music stores to savor on some cool tunes. Eventually, Arabic blogs started emerging and interactivity with hip-hop became a click of a button away.

From hip-hop enthusiasts’ bloggers to rappers from the GCC, it wasn’t really a well-monitored beginning as it was mostly circulating around teens who didn’t have role models to properly guide them. The way hip-hop primarily evolved in Saudi Arabia perpetuated in a redundant and vulgar sequence of mutual dissing and over-used topics.

Hip-hop unfolded into the inexperienced hands of Saudi youth: techniques were unpolished, the core of hip-hop was misunderstood and unhealthy challenges became a trend. It took the form strong language and the main purpose is to shake up and intimidate the opposing rapper.

At that time, among the first founders of hip-hop in Saudi Arabia were Saudi rappers Abadi, Klash and Qusai.

One of the earliest rappers is Abadi, who hasn’t been releasing a lot of material lately. On the other hand, Klash started on the wrong foot but eventually corrected his mission statement as a rapper and changed his rapping style, lyrics and attitude vis à vis the essence of hip-hop and the new generation of local hip-hop fans. His recent messages are all mainly social and community issues. He is known for his straight-forward lyrics and senses of controversy.

Mostly known to all, famous for his smooth hosting skills in “Arabs Got Talent,” Qusai stands out as a hip-hop pioneer in Saudi. His commercial success and presence under the public eye does not nevertheless undermine his involvement in local social issues, in supporting local artists and reflecting a more accurate image of hip-hop.

It wasn’t until Qusai came back from the US that rappers started to rap in English. The scene is very diverse.

It’s important to state that there are some underground artists who are non-Saudi but have been living in KSA for more than 15-20 years.

For instance, hardcore underground hip-hop group Run Junxion consists of 6 MC’s and 3 producers. Although they come from different parts of the world, they are a family. Their nationalities range between Syrian, Saudi, Canadian, American, Indonesian and Eritrean.

Most of their lyrics are in English, which makes their fan base a bit limited. In the Kingdom, the English language is not favored due to a local conservatism and strong attachment to heritage and culture. It is not rejected but rather considered secondary.

Another group to mention is Jeddah Fam, a group that mixes hip-hop and RnB, using both English and Arabic. The group carries positive and uplifting messages. Consisting of eight members, originating from Saudi Arabia, Eritrea and Somalia, the group envelops Black Drama, who is considered one of the best rappers to rap in Arabic and Ayzee, an R&B artist with a very promising future.

Today, artists such Klash, Slow Moe, Moh Flow, Majeed and Abz stand out. Alongside Qusai and a handful of artists, Klash has been in the scene for quite some time. As for Slow Moe AKA, Saudi Thugz, highly influenced by hip-hop legend 2PAC, carries on a controversial persona. He is very popular due to his attention to the youth and creating the “SaudiThugz” movement.

Moh Flow is considered one of the top hard-working artists in the Saudi scene. More fluent in English, Moh Flow doesn’t gain the recognition he deserves, although his work ethic is much admirable.

Joining him are Majeed, Sleuther and Abz, who also rap in English and have great potential if they stay consistent.

Furthermore, there are other artists in the scene, but who aren’t as active as the ones previously mentioned. To name a few, MC Rakan, The West Side Us, The West Coast G.Z., DEVI.G and others. I will be shedding light on more artists and other elements of hip-hop in future issues. At the end of the day, it is a fact that hip-hop culture has become a universal one.