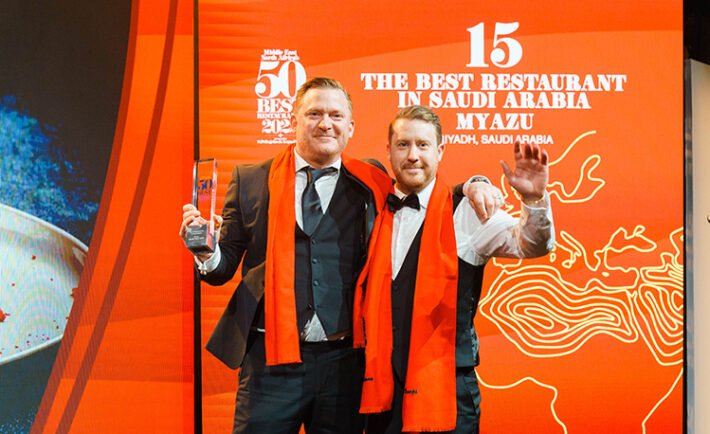 The inaugural list of Middle East & North Africa’s 50 Best Restaurants is revealed in Abu  Dhabi, shining a much-deserved spotlight on the region as a world-class culinary destinatio.

The culinary stars of the restaurant world converged in the UAE capital of Abu  Dhabi this evening, 7th February 2022, for the debut of the Middle East & North Africa’s 50 Best  Restaurants awards, sponsored by S.Pellegrino & Acua Panna. Restaurants from across 11 countries  within Middle East and North Africa were announced as the top 50 places to eat in the region at an  event held in Conrad Abu Dhabi Etihad Towers. Hosted in partnership with Department of Culture  and Tourism – Abu Dhabi, the event culminated in the announcement of the region’s first ever No.1  restaurant, 3 Fils, whose team took to the stage to receive the award.

Myazu, located in the breathtakingly beautiful location of AlUla in Saudi Arabia creates a dining  experience rooted in the culture and art of Japanese cuisine. Ranked No.15, Myazu creatively blends  traditional techniques with modern day culinary techniques to create Japanese favorite dishes using  only the best ingredients. Chef Ian Pengelley is the culinary force behind Myazu and is known for his  dishes that blend texture, aroma and vibrant flavors from Tokyo and Kyoto. The restaurant’s  signature dishes include the marinated yellowtail sashimi with jalapeño, scallop and foie gras gyoza the kinoko Gohan, black cod and wagyu beef. The restaurant team is meticulous in creating an  unmatched dining experience for its guests. 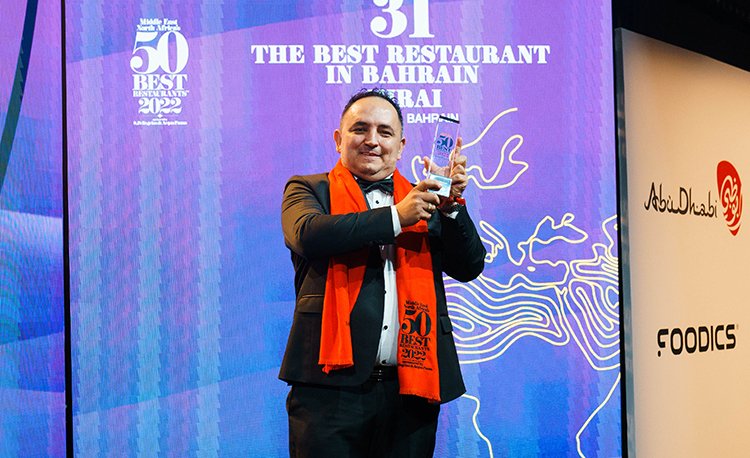 Mirai, long-standing local favourite serving up modern cuisine in Manama, Bahrain, is largely  considered the go-to sushi spot on the island and ranks No.31 on the list. Open since 2002, this buzzing and contemporary concept serves up a mix of authentic and inventive Japanese-inspired  dishes that are eye-catching and innovative takes on Japanese street food or reimagined classics. Set in the vibrant Adliya district, Mirai offers popular dishes including tuna pizza, the shrimp popcorn  bao and the chef’s signature maki featuring a combination of tuna, salmon skin, eel and shredded  spicy crab.

The Japanese izakaya Zuma in DIFC, Dubai, founded by chef Rainer Becker, claims the No.2 spot,  followed by Raz Rahav’s OCD Restaurant in Tel Aviv (No.3), which is also named The Best Restaurant  in Israel.

Popular Singapore-born chef Reif Othman is honoured with the Chefs’ Choice Award. Designed to  give recognition to a chef who has had a positive impact on the regional culinary community, the  award is peer-voted by chefs of the restaurants on the MENA’s 50 Best Restaurants list. Othman has  worked in many of the leading restaurants throughout the region, including Zuma and Burj Al Arab in  Dubai, and recently opened a new restaurant under his own name, Reif Kushiyaki, which features on  the ranking at No.16.

The Sustainable Restaurant Award honours the establishment in the list with the highest  sustainability rating. This award is presented to Lowe (No.23) in Dubai, a restaurant that has set a  new standard for exquisite food that goes hand-in-hand with sustainability. Chef-owners Jesse Blake  and Kate Christou focus on reducing waste through nose-to-tail cooking while also supporting their  team and the wider community.

As a recognition of excellence in restaurant service and dining experiences, the Art of Hospitality  Award is presented to Dubai’s Trèsind Studio (No.4). The restaurant is commended for its theatrical  gastronomic experience incorporating multiple changes of pace and scenarios. Chef Himanshu  Saini’s brand of advanced Indian food is matched by the perfectly choreographed service.

Sahar Parham Al Awadhi, formerly Head Pastry Chef at the esteemed Burj Al Arab in UAE, takes  home the MENA’s Best Pastry Chef Award, sponsored by Valrhona. Sahar began her culinary career  in 2014 and has worked at La Serre Bistro & Boulangerie in Dubai with Izu Ani and Le Saint Georges  in Paris. As an Emirati, she believes in showcasing the origins of her ingredients and supporting local  producers.

Other pre-announced award winners accepting their trophies on stage include Tala Bashmi, often  referred to as the voice of modern Bahraini cuisine, winner of the first Middle East & North Africa’s  Best Female Chef Award; Kamal Mouzawak, one of Lebanon’s most prominent food activists,  winner of the Foodics Icon Award for elevating the slow food movement in the country and his  outstanding contributions to the restaurant industry; and innovative izakaya joint Kinoya, which  picks up the One To Watch Award, presented to founder and ‘Ramen Queen’ Neha Mishra.

The Academy is divided into six regions: the Gulf; Saudi Arabia; Levant-plus; Israel, North Africa  (East) and North Africa (West). Each region has its own panel of members including a chairperson, called the Academy Chair, to head it up. The panel is made up of food writers and critics, chefs,  restaurateurs and highly regarded gourmets. For the 2022 list, each MENA Academy member voted for seven restaurants, with at least one of these located outside the country where they are based.  None of the event’s sponsors has any influence over the voting process. 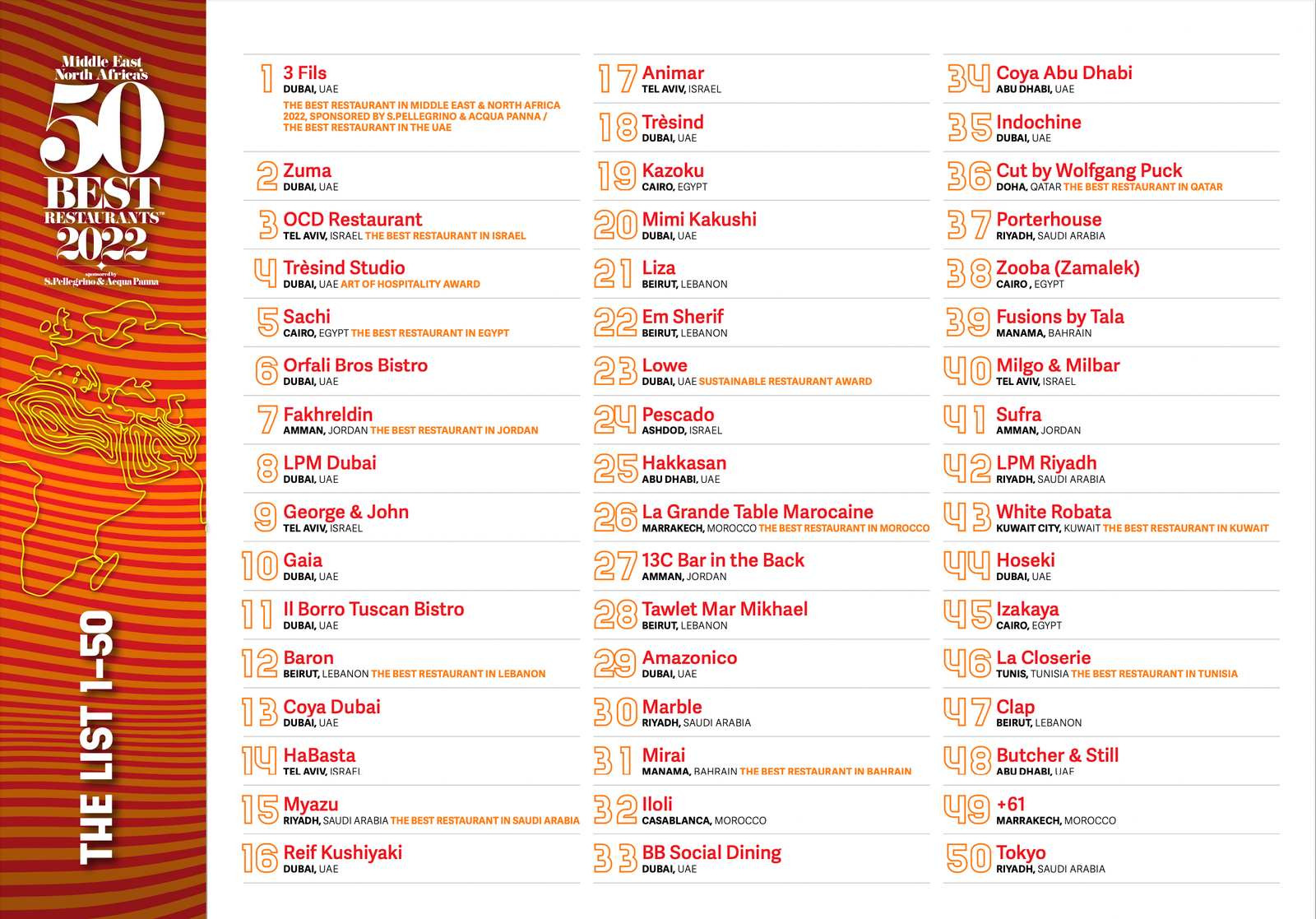