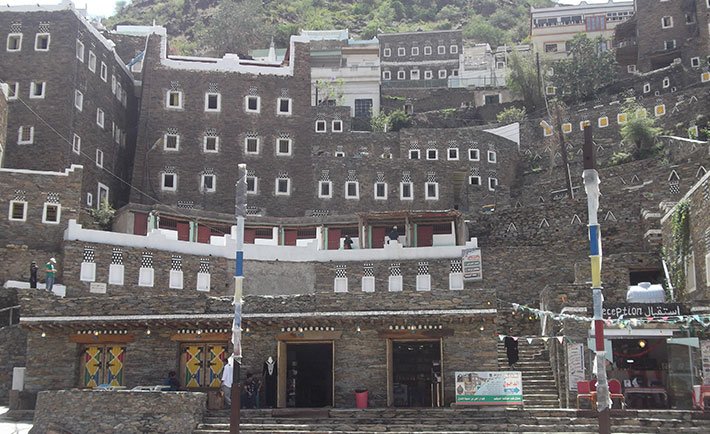 Asir holds a special place in my heart, over the years I have truly fallen in love with its scenic landscape, benevolent people and disparate architecture.

This was the first time I got to spend almost a month in Asir. It gave me the opportunity to witness its enigmatic architecture.

All around Khamis Mushayt and Abha are these tower-like structures called hoson. Most of the ones in the city have been made recently to highlight the architectural value of the region. These hoson stand like proverbial sore thumbs adorning the main roads.

On the outskirts of Abha we were driving on the highway towards the touristic village of Habalah. On our way we saw a rambling village that seemed to be stuck in time. We immediately took a turn towards the village and went through its dusty roads. 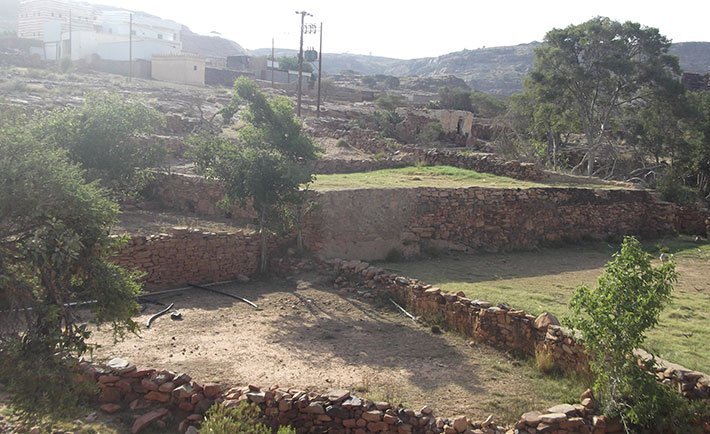 Many of the buildings are in a depilated condition here but there were a few that were in good shape – those were the ones in which people were still living in. They even seemed to make amendments to these historic structures to make way for modern amenities such as plumbing pipes and electricity cables; ruining their beautiful facades in a way.

There was a depilated building in front of us. When we looked at it closely we noticed that only the foundation of the building was made of stone, the rest was a mix of adobe, clay, pebbles and mud. Even though depilated it still had these neat lines running through – something which all traditional houses in Asir have. 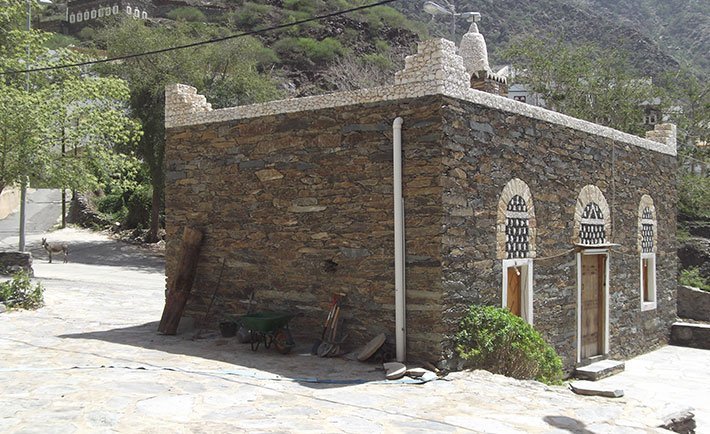 Surprisingly their wooden doorways were insipid. I expected them to be much more ornate as in Saudi Arabia, I always found doors all across the country to be ornate. The floor size of the structures were quite small, it was the height and multiple floors that made up for the lack of space in this region.

A House From The Levant

A few days later we were traversing over the mountain roads near Abha on the way to Jabal Sawdah – the highest peak in the country. While there is a much better route that tourists take to the peak, we took an alternative route that had continuous hairpin bends and precarious slopes.

Nearing the end of the road we came across a flat portion that had a small colony of houses. One of them was disparate from the others in the colony. It looked like a leftover building from the crusader days in the Levant region. Its plastered walls were wearing away, revealing the solid rock it is made of. This lofty 3 storey building appeared like a garrison. 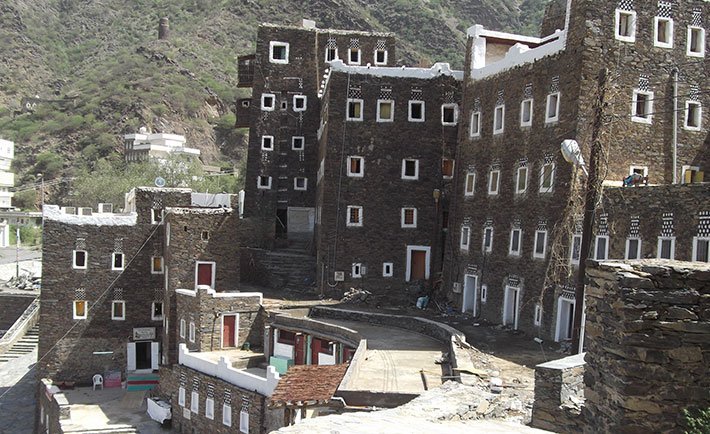 Nearby it was another house that was made out of stone, but this one even had an outer wall encompassing its boundary. In the Asir region many such walls can be seen, there purpose being to guard the farms and identifing boundaries.

While the hoson that I’ve seen were all in the shape of a rectangular prism, there was a terraced farm that had this hoson that was spiraling. What surprised me more was that it was in the middle of the farm, well as normally the hoson act as watchtowers on the corners. It was made of thin slates of uneven rock. 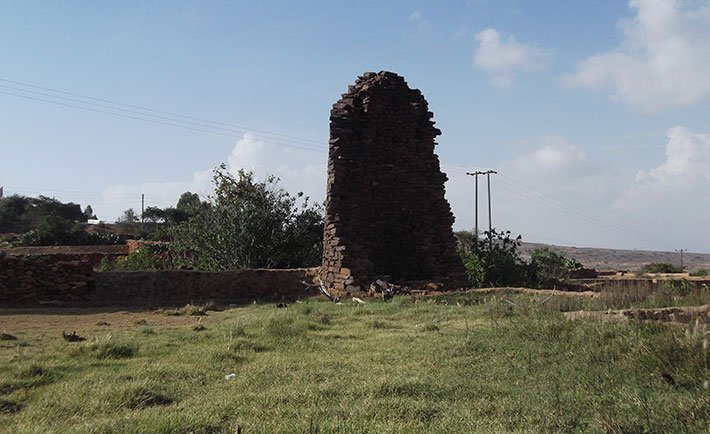 In my eyes it is undoubtedly the stone town of Rijal Alma. Located deep inside the Asir mountain range is one of Saudi Arabia’s best keep secrets. Situated at the foot of a valley with a hilly milieu in the background, this heritage village is in almost in the same form as it was centuries ago – well at least a good portion of it still is! 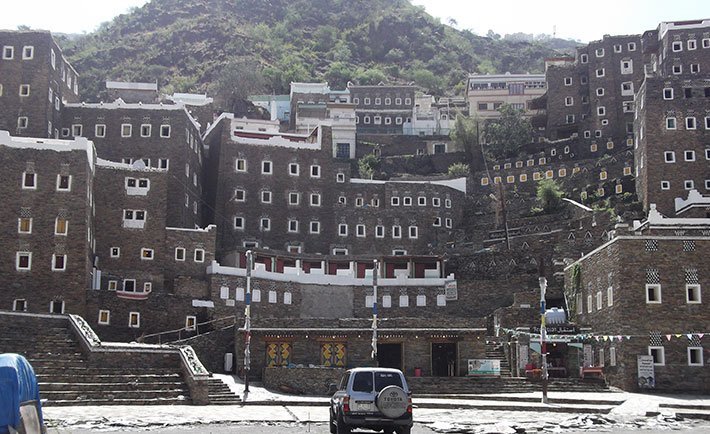 Clinging to the side of a hill and overlooking a sinuous road that once brought spice and incense trade into the interior of the peninsula, the entire village has taken the appearance of a living museum.

The heritage village is made up of dark colored traditional stone built houses that have white window brackets and amphitheater like stairs in front of it. The Sarawat mountain range runs in its backdrop. 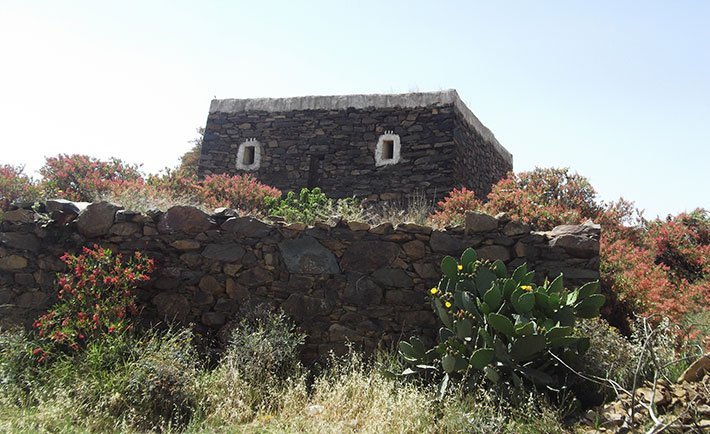 The solidly built houses double as mini-fortresses. The relief work on balconies, made from wood gathered from the trees that grow on the hills, cling to the obscure houses.

The whole place is constructed in numerous levels, with each level housing a line of historic structures. 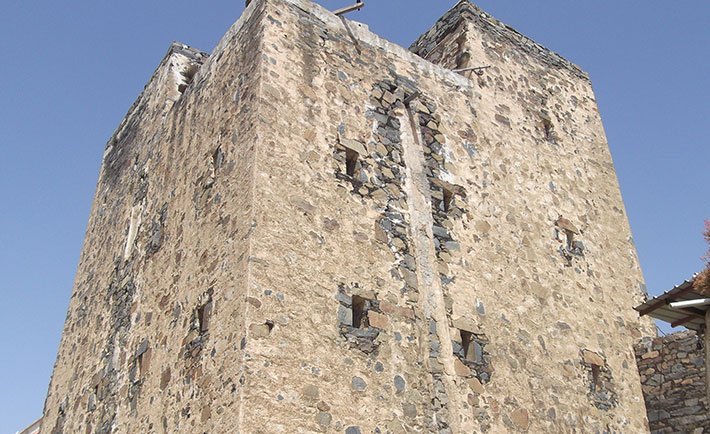 The dressed stone towers, patterned with shining lumps of off-white quartz, that comprise the original village are typical to the architecture of the area. They tell the story of ingenuity and skills that allowed the villagers to maximize the use of available materials.

We traipsed through the village past fallen trees, broken floors and uneven alleyways. As we were proceeding north we saw an entire neighborhood of similar houses down below. The village was much bigger than what we initially thought. A distinctive factor in this village was that the house doors were ornate. Traditional Asiri motifs ran across the cracked wooden doors. 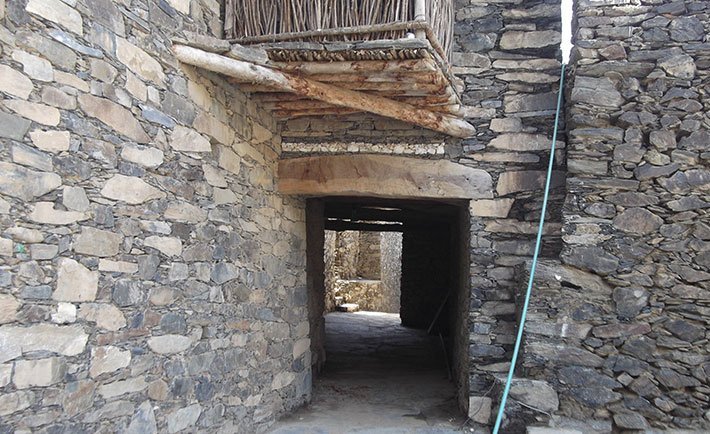 Some areas in the village were blocked by rubble and scaffolding was placed on their pathways. The western portion of the village is in a depilated condition, of some structures only rubble remained whilst others had broken walls revealing the interiors.

We then went to an area that had houses in a better condition, as we went past them we felt a cool breeze that was blowing from their interiors on a rather hot day. Apparently the material which was used to construct the houses keeps the interiors cool despite the hot weather.