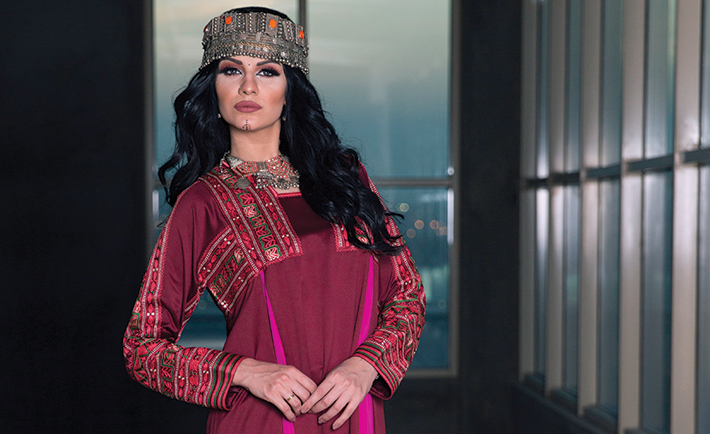 Celebrating traditional fashion across the Kingdom.

Traditional clothing is an important aspect of Saudi Arabia’s cultural heritage. Yet, in a drive towards modernity, this facet of our heritage is not as celebrated as it should, despite its unquestionable beauty.

In this issue, we pay tribute to the “Original Threads” that have been worn by women of different regions, honor their eclectic fashion sense and celebrate the beautiful diversity of the Kingdom. 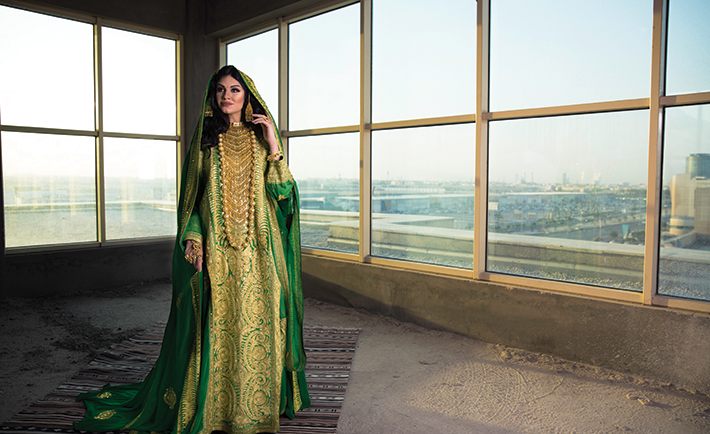 The thawb nashal is a familiar piece of the Eastern Province and is made up of a semi-transparent material that can be used through multiple colors of base-clothing fabrics with a differentiation in metal threads and silk embroideries. The translucent style itself is typical of the hot interiors of the Gulf lands and is said to be derived from Najidi origins due to the share of the basic pattern with the age-old cotton thawb.

The festive finery of the traditional garment comprises a sheer overdress accompanied by lavish sleeve openings and a head cloak. Its sequined embroidery holds representational motifs of flowers and birds and includes accent-pattern segments like panels and gussets. 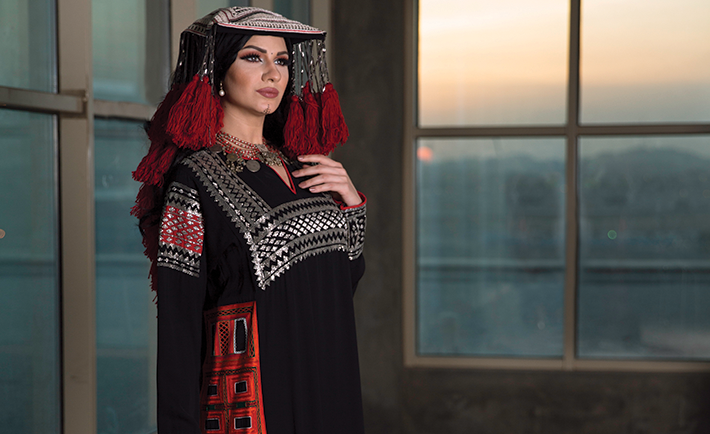 The Bayt al Fakih is a southern-Arabian cotton-dress piece originating from Northern Yemen. It holds a societal viewpoint as one of the earliest and the most authentic of pieces in Arabia. The traditional garment itself is seemingly distinct in design due to the astounding elements used through the application of colored braids and silver metal threads that are set to warmly complement the indigo-based cloth. Additionally, the thread used on the nomadic apparel showcases the popular form of the decorative elements used in design within the southern region. 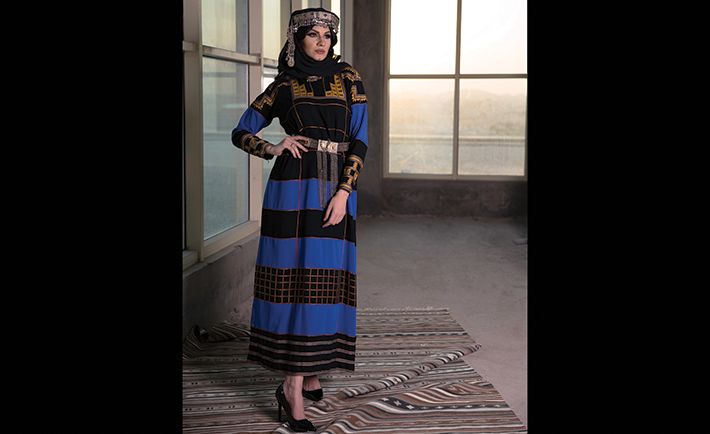 The garment itself is normally slim-fitting in order to enhance the components of the materials used in design. The enrichment of décor applied embodies the traditional and modernized design segments of regional influences ranging from the Sarawat mountains in Asir to the desert terrains in Oman.

The traditional thawb styles of the northern region differ from the mainstream portrayal of Bedouin dressing styles as it’s fashioned by the use of hand-loomed wool needed to tailor the deep-red and, at rare occurrences, green materials. The tribal dress of the north holds the finest of subtleties in design with the use of geometrically botanical motifs and embroidery against the ruby-colored fabric.

The thawb itself is beltless and holds grand proportions to ensure loose-fitting features when in wear, similar to an abaya. No waist belts are worn to unveil one’s figures as the conditions within the region are extremely hot and such fastenings wouldn’t ensure comfort when attached. Overall, the fabrication of such a style presents the primary influences of the temperature, terrain and topography of the respective region relative to design. 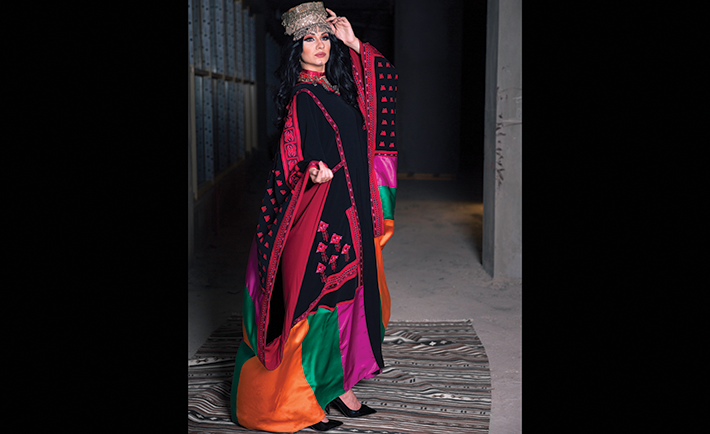 The Najdi Bedouin women’s traditional thawb is a unique black garment tailored through the use of fine linen, soft cotton or lightweight wool. The Central Arabian attire is derived from the kaftan, a loose clothing item which holds variance to the robe and tunic, and is worn as an over-garment to one’s clothes in respect to the ruling of the Kingdom upon modest dressing standards, though it was once worn to ease the endurance towards Saudi’s heat through its flair in cool wear. 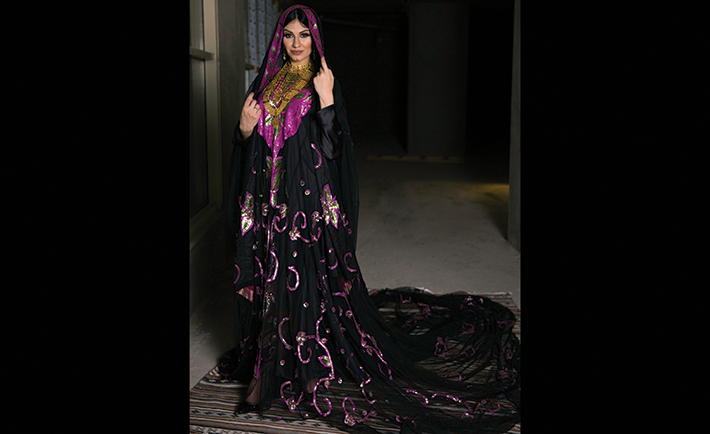 Moreover, this conventional piece expresses gracefulness and comfort through the looks of its loose-fitting features and is suited to make the perfect maternity dress. This spectacular gown also provides reminiscence to the romantic tales of the Arabian desert life long ago. 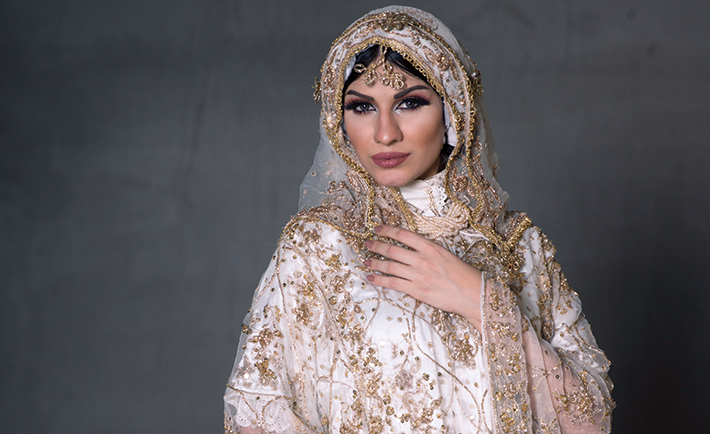 The Hijazi women’s traditional thawb is a semi-transparent, capacious gown made up of cotton gauze and is used in the design of multicolored fabrics. Its unique and customary style holds layered clothing items and presents beautiful embroidery components from head to toe. Though the Hijazi thawb is designed using small-scale sizing proportions, it’s cut in a similar manner to the Najdi thawb.

The thawb styles of the western region design their cultural attire in an ideal manner with the intent of initiating one’s attention to the custom-made blouse when worn with the gown. A unique addition to this is the zabun and the mudawwarah – a zabun is a traditional, princess-styled frock that is fashioned in the manner of a collar and is mainly worn by the townswomen of Hijaz while the mudawwarah is a complementary headgear to the outfit with elaborate edging and a diamond broach.

Amina Al Jassim
We would like to express our deep gratitude and appreciation to Saudi Fashion Designer Amina Al Jassim for providing us with traditional clothing from her own designs, through her brand Dar Breesem, for Sharqiya, Janoub, Shamal and Najd clothing and accessories.

Nadia Halabi
A special thank you to Nadia Halabi for her assistance, and for providing the Hijazi traditional attire.

Makeup/Hair
We wish to also extend our thanks to Shuaa Al Duhailan for hair and makeup through Shuaa Center.