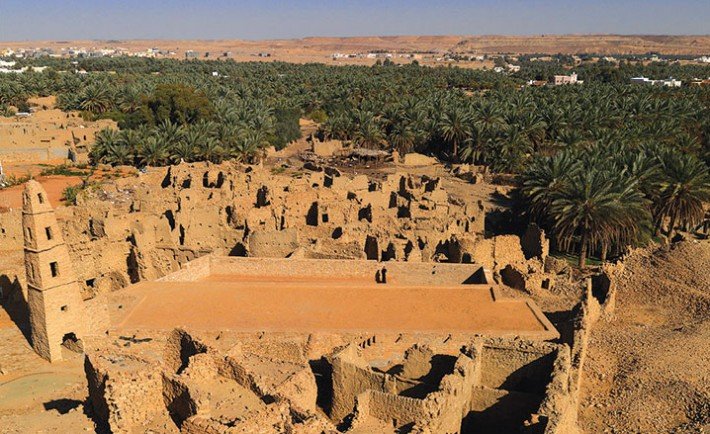 It was my first ever trip to the northern part of the country, I kept peeking from the window of the aircraft to catch sight of the new landscape. What astonished me most was the fact that there were hardly any mountains in this part of the country especially coming from craggy Hijaz.

It was just barren desert and as we approached closer to the city of Sakaka I saw circles of green irrigated fields measuring hundreds of meters in diameter. It was an amazing contrast seeing vast tracts of desert intermingling with circular fields of fertile farmland.

I landed at Jouf airport, and made my way to Sakaka located some 30 kilometers away from the airport. The street was wide and lined with short olive trees almost like I was in a country near the Mediterranean.

After catching up with a friend who lives in Sakaka, we made our way to the historic town of Domat Al Jandal, where the remarkable Omar Bin Al Khattab mosque stands.

It is believed that Omar (RA) ordered the construction of the mosque on his return from Bait Al Maqdis in Jerusalem. The mosque’s construction is dated back to over 1,300 years making it one of the most important historic, cultural, and heritage landmarks in the country and a prominent tourist attraction in the northern province of Jouf. 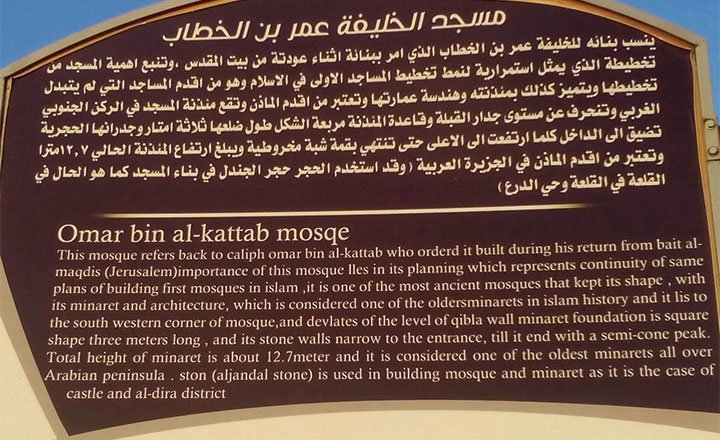 As we approached the center of the small town of Domat Al Jandal we saw brown colored signboards pointing towards the historic part of the city.

We reached it and soon after noticed a lofty minaret standing tall from the surrounding historic ruins of an ancient housing quarters. The minaret stands adjacent to Omar Bin Al Khattab mosque and is said to be one of the oldest in the world. It measures about 12.7 meters and is the most striking feature of the mosque.

Despite the recent proliferation of buildings and television towers, the soaring minaret gives a distinctively Islamic look to the skyline of the ancient dwelling. 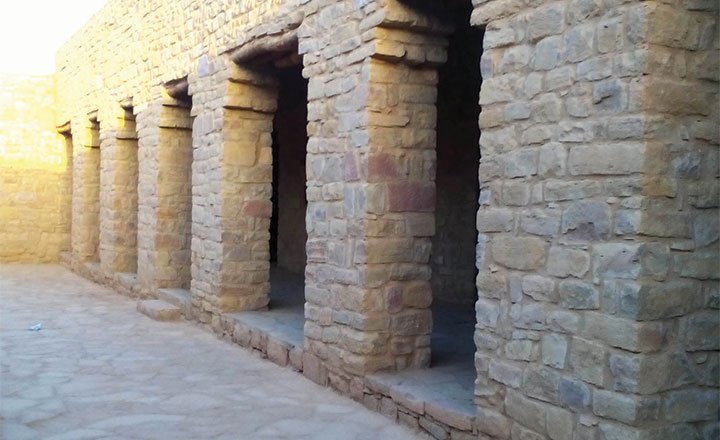 The actual mosque is below ground level, so we had to descend two flights of stairs to reach it. The entrance of the mosque is quite small compared to the prayer halls it leads to. Cobblestone pathways led us to the quadrangle courtyard of the mosque. It was rather empty and serene.

The mosque is divided in two parts. On the northern part is the original structure and opposite to that is a much later extension to the mosque.

We first entered the more recent structure, which surprisingly doesn’t have a door. There were prayer rugs in the mosque, which show that prayer is held even to this day in the historic mosque. 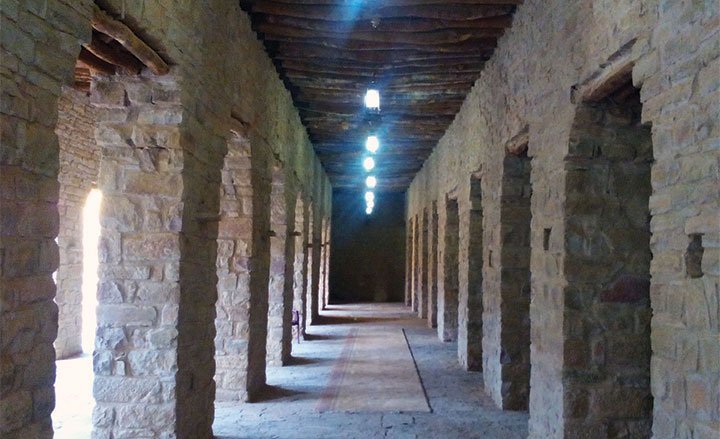 The structure is made of uneven stones adjoined with mortar. The prayer hall is noticeably wide in width and short in length. Numerous pillars form the basis of the structure with uneven arches between them, all affixed by beams of wood.

The roof of the building is made from straw and reinforced with logs of wood. Lanterns hang from the ceiling, which give a historical feel to the mosque.

We then proceeded toward the older part of the mosque, which has small wooden doors that seem relatively new. But once inside it seems as if much of the original structure remains, with a similar straw roof and uneven stones in its walls. 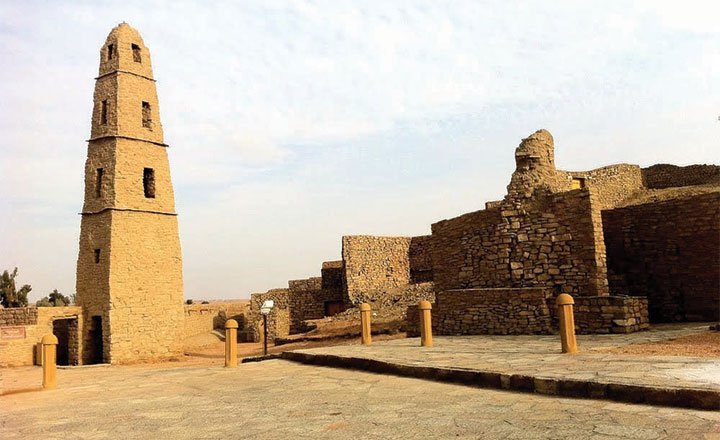 Surprisingly, the access to the top of both structures is open to the public and a path of rutted stairs leads to the top. I’d decided not to walk on the roof as some of the other tourists, as to me the roof appeared to be fragile and I didn’t want to damage a heritage structure such as this one.

There were many more places in Dumat Al Jandal we had to explore, most of which were in a close vicinity to the mosque so without further ado we made our way out of the mosque and head towards the other sites the ancient city houses.