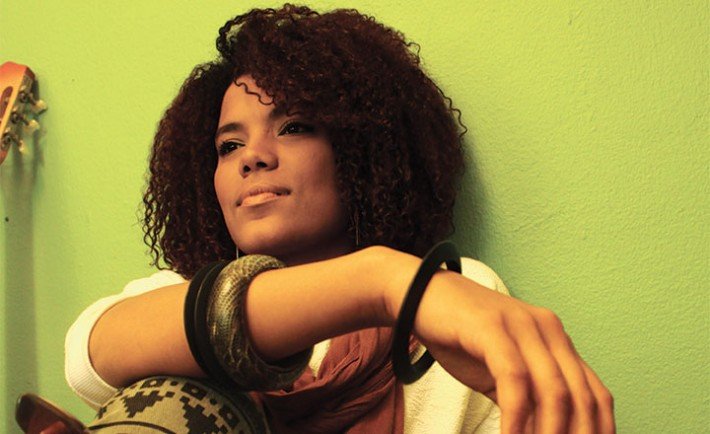 DJ is constantly on the look out for emerging local talent. We got the opportunity to interview one of these hidden gems: Ninyaz Aziza.

Ninyaz Aziza usually performs under her stage name, Chena. Born in Italy, Aziza moved around quite a bit and grew up in a number of places including Poland, Germany and NYC. Currently residing in Jeddah, she holds a bachelor’s degree in educational management and business administration. Her days are spent working as an ESL instructor and an educational manager. During evenings, her time is devoted to things she enjoys most, namely; singing, fashion modeling, designing and playing tennis.

“My biggest source of inspiration have always been my mom and my late grandfather; he remains a real inspiration to my life and dreams,” she says while talking about her passion for music and singing.

Creating time to balance both work and things you’re passionate about can be challenging. “I manage to balance my work and hobbies by giving each segment of my life its own full time without having crossroads or collegians.”

Apart from singing, Aziza models from time to time. She started modeling back in NYC and has big plans to innovate her knowledge and creativity in modeling, designing and eventually create a fashion brand.

When you find your passion and true calling, it becomes more than your hobby or career. It’s something you define yourself with.

“Music is something I grew up with and it courses through my veins. I have been singing since the early age of 6 but taking it out to the scene was in late 2012.” Aziza’s family has musical background and appreciation for the musical arts as well; many of them sing and play a variety of musical instruments. They’ve played an important role in what she aspires to achieve by constantly offering her support and encouragement.

“When it comes to music I want to sing songs of my own or cover songs that enlighten the soul and entertain listeners all the same.”

The musical genres that speak to her more than others including avant-grade, blues, jazz, RnB, folk, new age, vocal and gospel to rap.

“I met and collaborated with some great local talents such as Vinly Mode, Moe Zain, Rusty, ABZ, Trippy, Lou, Roya and Mind Circus, to name a few.”

The biggest shout out goes to Big Hass for the support he has for real talent and artists. Vinyl Mode and Trippy have backed Aziza from the very beginning and have become more like family.

“I have learned from a lot of musicians locally and internationally but one musician I can’t forget till this day is Asim Al Qurashi. Words cannot do him justice.”

Al Qurashi is an Australian/Sudanese entertainer and a multi-talented musician playing over five instruments. “The most exotic thing about him that caught my attention was his ability to whistle really long musical notes.”

While talking about future plans, Aziza mentions that if an opportunity to join a band presents itself, she wouldn’t hesitate.

Performing for an Audience

“This might sound silly but my very first time performing for an audience was on one of the flights I had with my mom from Poland and it was for the passengers and the pilot. Ever since then I couldn’t stop performing.”

She has performed at Big Hass’s radio show and was featured at his occasional event, The Beat. The American Consulate, VIP gatherings, KAUST and live broadcast have also provided her a lot of opportunities to perform.

Mostly you will find her performing at gatherings and live on Tempo Radio. It’s and electronic broadcast station that she jams live on every Friday. She sends a big shout out to Turki Mohammed as well from Tempo Radio as his support is indescribable as well.

“Currently I am learning to play the oud and guitar. I have been writing poetry since I was 14 and now I have managed to write my own lyrics and sometimes get co-help from fellow musicians in writing.”

While talking about inspiration she mentions that what inspires her most to sing and get into performance arts is life. Life is full of inspiration.

Her goals are to succeed passing the bridge of audience, varieties and taste. Her message to people who want to join the music scene is to just sing for the passion of music.