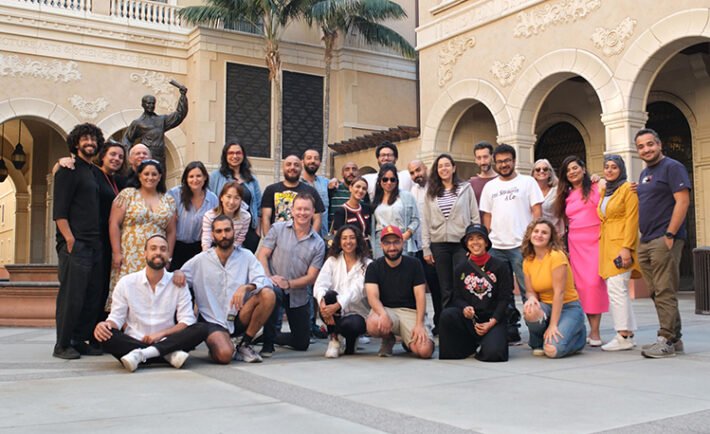 Netflix and The Middle East Media Initiative (MEMI) have teamed up to offer four writers from the MEMI Summer program a grant of $30k each to help further their creative projects.

Every year, MEMI identifies a dozen or more mid-career and up-and-coming writers from the region and invites them to Los Angeles for 5-weeks to workshop their show ideas in a writer’s room facilitated by a professional TV writer. As part of its ongoing partnership with MEMI, Netflix has selected four writers from this cohort – Sultan Tamer (Saudi), Summer Shesha (Saudi), Ahmed Essam Elsayed (Egypt), and writing partners Karim Ariqat and Mohammad Ali Al Nablsea (Jordan), offering them a one-time grant to complete their projects.

The writers will be given 6 months to use the funds, whether to assemble a writer’s room, extend their stay in the US to work with MEMI instructors to hone their series, or hire a Netflix-approved consultant to advise them on the continued development of their series. At the end of the term, the writers will pitch the fully developed stories to Netflix.

Speaking of the partnership, Deana Nassar Fernandez, Netflix’s Grow Creative Manager for the Middle East and North Africa, said, “We have an ongoing partnership with MEMI to support emerging and established talent from the region. As we work to tell more stories from the Arab world that can be loved globally, we’re collaborating with industry partners to equip storytellers with the tools they need to tell the best version of their stories. Together with our creative partners, we want to do more to invest in and empower those in the industry, and those on the cusp of breaking through. This partnership is an important milestone in helping us identify the next generation of writers from the Arab world.”

“What makes both MEMI and Netflix MENA unique is their access to top global resources, combined with the expertise of their Arab executives, many of who come from grassroots movements of the creative economy.” Said Hisham Fageeh, Head of the Middle East Media Initiative (MEMI). He added, “There is no shortage of good stories or storytellers back home, it just comes down to the method of cultivation. The School of Cinematic Arts at USC was open to an interpretation of its pedagogy, to fit the needs and cultural contexts of the Arab world and we are finally seeing the fruits of this beautiful partnership.”

Netflix has a longstanding partnership with MEMI. MEMI’s summer program participants and Alumni get a yearly opportunity to meet with Netflix executives and pitch their stories. Netflix has also hosted Masterclasses for MEMI Alumni on creative writing and pitching. Some of the region’s most successful writers have participated in the MEMI program including Amr Salama, Tamer Mohsen, Sarah Taibah, and Mariam Naoum. Netflix is working with industry partners to create more opportunities for Arab talent and storytellers through concerted efforts and investment in talent development and skills enhancement programs.