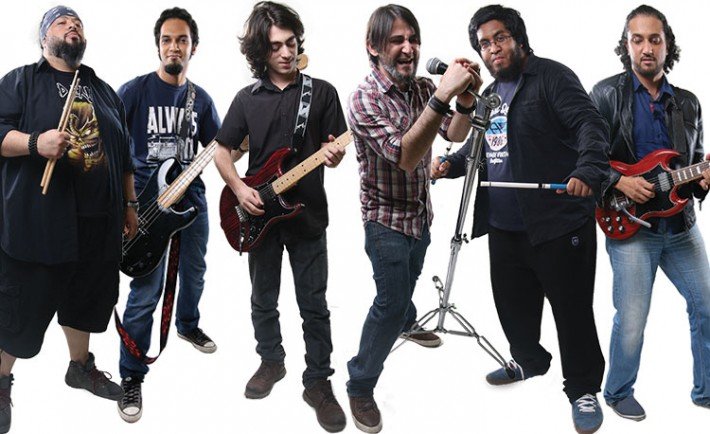 How and when did Talsam come about?
Talsam was formed in September 2015 when Abdullah Al Zaher, Shaher Karkashan and Ayman Shawly wanted to recreate that 90’s grunge rock sound. It wasn’t too long before Abdullah found the perfect vocalist via Facebook for that role, Moe Dahmous, and that was the beginning of Talsam.

You say you’re bringing back the flavor of the 90’s rock music, so why specifically the 90’s?
It is the music that all the Talsam members love and have in common. Some of us grew up listening to it in during that era and for others the 90’s music just grew on. We think that rock in the 90’s was at its best. Most of the rock sub-genres were revived at some point except for grunge, which didn’t really have its share and disappeared with the beginning of the new millennium, so we’re bringing back that 90’s sound to the crowds and everyone loves it.

What have been some of your favorite performances and remakes?
When we played Otherside by Red Hot Chili Peppers and people started singing along, it was the best feeling; seeing people interact with our performance and us. We also loved playing our originals and watching people enjoy our own music, it made us very proud.

What do you think about the music scene in Jeddah and what do you think is lacking?
Music is a universal language and you can find it anywhere you go. There are definitely so many great talents in Jeddah and a lot of people who enjoy good music. We just need more support and the right platform so these talents can be heard.

Any upcoming projects?
Performance-wise, we are appearing at the 2016 Rock Fest this summer and then doing our own show in Jeddah, as well as working on more original songs.

What piece of advice would you give to other upcoming bands and aspiring musicians out there?
First, find the right sound that defines you. Make sure the chemistry between the band members is great with good communication, but most importantly, have fun doing what you do.