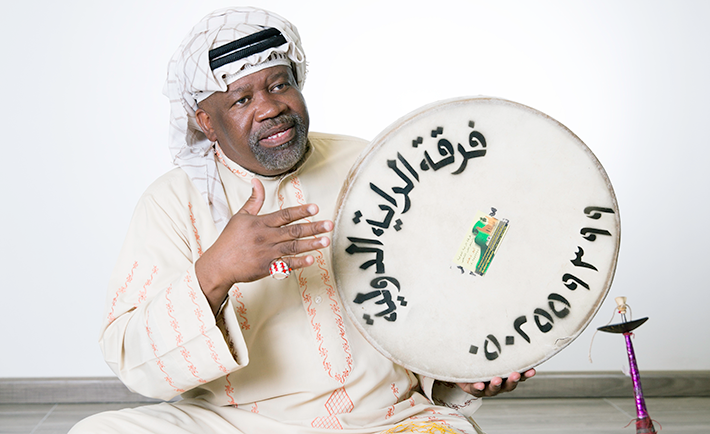 You’ve been to a concert, right? When the stage is set up to showcase the band members’ larger-than-life personality, the dazzling kaleidoscope of twirling lights is synchronized with the special effects, and the speakers are set up so you can hear every single note.

Have you got the picture in your mind? Good. Now, throw it all away, because that is the exact opposite of what I’m going to tell you about today.

Instead, imagine a dark-skinned man in his 50s, wearing a cream-colored thobe with a sleek black vest and wizar wrapped around his waist, swaying to a rhythm set by the drums held by some members of the 10-man group he obviously leads. 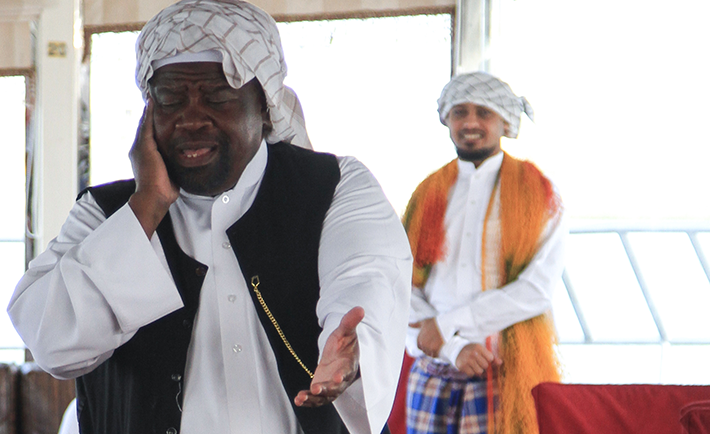 His shemagh, rarely seen in Sharqiya’s streets today, accentuates the authenticity of the verses he sings with a huge smile on his face. His words draw you into tales of adventure, longing, and, occasionally, sacrifice: the everyday life of a fisherman. His melodic voice rises with the music produced by an eclectic collection of instruments, melding in perfectly till his voice, and that of the rest of his troupe, make you feel, for a brief beautiful moment, that the adventure is yours.

This, my friends, is Abu Daham, and he, and his Khaleeji musical troupe, Al Rayah, are a sight to behold. 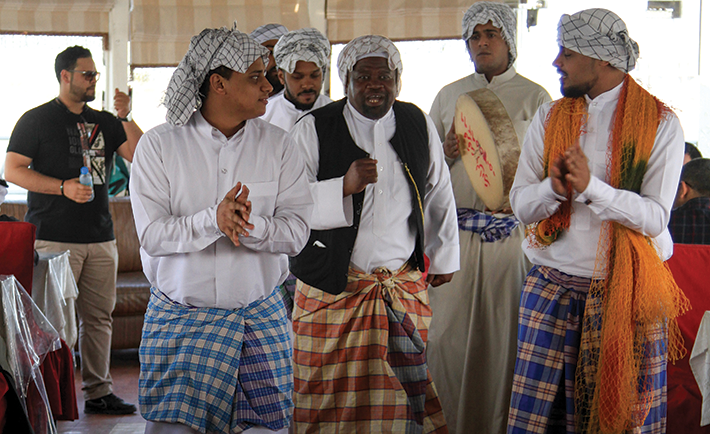 To put this in context, let’s take a step back into a time when fishing and pearling were the lifeblood of Sharqiya. Back then, men would embark on voyages to hunt for their livelihood, leaving their wives, children, and loved ones behind for months at a time.

These trips could last four to five months, and would offer no guarantees to the sailors or their families. Sometimes these men would return with a trove of pearls and secure their families’ futures for a year. 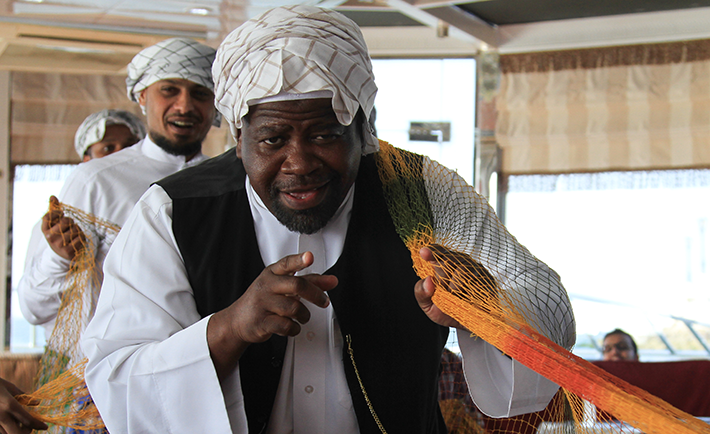 On these occasions the returning boats would sail their flags high, and the fishermen’s voices would carry across the waters to their eagerly waiting families on the shores, whose own voices would rise in song, welcoming their men back home. Other times, these brave men would lose a friend to the dangers of the sea, and they would return home with their flags at half-mast, their somber silence foreboding the sad news that some wife, mother, or sister would be dreading.

To ease the pain of separation, and to keep their spirits up, these brave fishermen and pearl hunters would sing. They would use whatever musical instruments they had available, or improvise if they didn’t have any, to set those songs to a rhythm. Often, they would sing as they worked, drawing fishing nets from the Gulf, hoping for a good catch for the day, or to inspire the pearl divers before they disappeared beneath the suface to the depths, seeking the elusive Danah, the largest and most valuable of all pearls. These songs were more than a form of entertainment for the sailors; they were an integral part of their identity, their self-expression, their lives, their struggles, and their sacrifices. 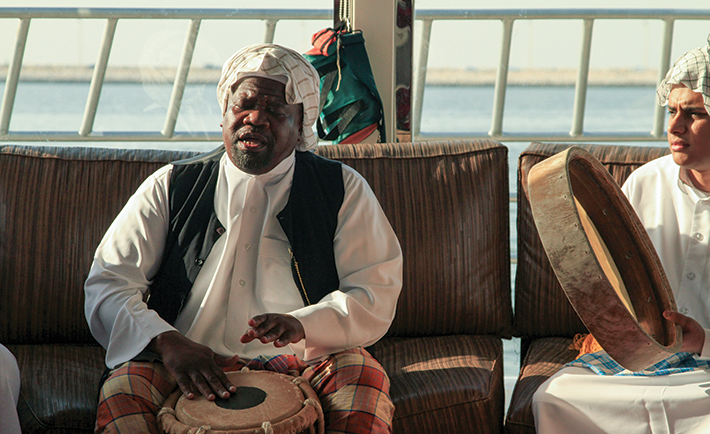 Today, the world is different. Yes, fishing and pearling is still part of Sharqiya, but it is waning in an age where more people work for corporations and the difficult lives of fishermen and pearl hunters are no longer a necessity. Yet, in progress, there is loss. It is for this reason that Johar Daham Al Dossary, or Abu Daham as you know him, has dedicated his life to preserving the culture of his ancestors since time immemorial. A man with a constant smile on his face who can always make you laugh, Abu Daham exudes energy. He has inspired others, the rest of Al Rayah, to dedicate their lives to sharing their culture and history through musical performances that feel more like a play than a concert. There are characters, settings, and plots that are implied more than articulated, but that doesn’t make them any less compelling. The group members draw you into their collective story via the instruments, the melodic chorus, or the beautiful engaging voice of Al Nahham, the main poet.

As wonderful as it is to be part of Al Rayah’s rendering of traditional Khaleeji folklore, you are still in for a pleasant surprise. The musical troupe has not only dedicated themselves to preserving the Gulf’s musical heritage, but they have expanded their knowledge to incorporate traditional folklore dances and songs from all parts of Saudi Arabia. Al Rayah is truly nothing less than a group of men who have taken their love of culture and music and made it their mission to share their love with the world. Their passion and energy has seen them perform in every corner of Saudi Arabia, include Al Janadriyah, and even internationally in the United States, China, the United Kingdom, and France, to name a few. 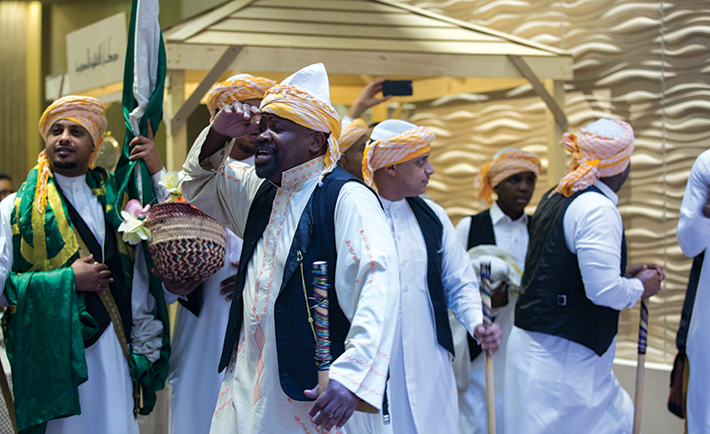 Abu Daham summarizes it best: “Art is fun, art is beautiful.” And while he constantly draws you into his troupe’s performances, if you look carefully, you’ll see moments where he gets lost in the music, moments where he isn’t singing for you anymore. In fact, he isn’t even aware that you’re there. He’s lost in a past that is long gone, a past that exists in his mind, but is just as real to him as it was to his ancestors. It is those moments that are most beautiful; it is those moments that drew me in and made me feel what it must have been like to live in a simpler time when music was who we were, not something we listened to.