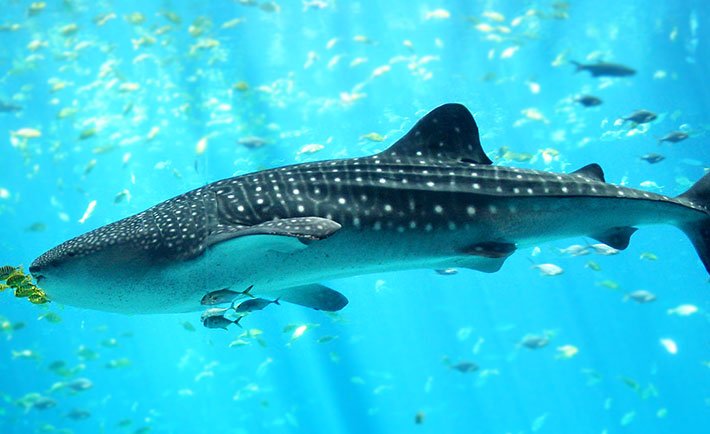 Some of the best diving and snorkeling experiences are the sightings of large marine animals.  Whale sharks are some of the most charismatic of the Red Sea’s mega fauna.

Getting in the water and being dwarfed by one of these colossal fish is just to good to be true, so you will likely have to pinch yourself to confirm that it really is happening.  Because we are visiting wild animals in their own environment; these whale sharks favor our encounters with curiosity and much tolerance, and it is important that we return the favor.

The Largest Fish In The Sea?

So, are Whalesharks whales or sharks? This animal could be mistaken for a whale since it is so big and docile.  Like whales they filter-feed on plankton by taking large mouthfuls of water near the surface.  The biggest confirmed size is 13 M with a weight of 36 Tons, and there even reports of them growing to around 18 meters long.  Unlike whales however, these are fish not mammals.  While they are the largest fish in the sea, they are actually not the heaviest.  Like all sharks, Whalesharks have light cartilaginous skeletons instead of bones.  The heaviest fish in the sea is the Oceanic sunfish, which is smaller but outweighs the Whaleshark because of the heavy bones that make up the Sunfishes’ frame.

Despite the size of the Whaleshark, little is actually known about them.  They are difficult to monitor as they migrate across great distances and dive to great depths.  There is no recorded information on how great their population is, a low estimation to be between 5 and 25 thousand, a surprisingly small population. In fact, the Whaleshark -Rhincodon typus is listed as vulnerable to extinction in the IUCN Red List of Threatened Species.  Also, Whalesharks are listed on the Bonn Convention for the Conservation of Migratory Species of Wild Animals (CMS). This identifies the Whaleshark as a species whose conservation status would benefit from the implementation of international cooperative agreements.

In addition, little is known about their reproductive behavior, how they breed, where they give birth or where their babies grow up. Age estimates for whale sharks are as high as 60 years, but no one really knows how long this species lives.

Indeed it is shocking that we know so little about these magnificent animals.  Bridging the knowledge gap is a dedicated team of scientists at the King Abdullah University of Science and Technology (KAUST) in Thuwal. In a very short period of time, professor Michael Berumen, at the KAUST Red Sea Research Center has established the world’s largest whaleshark tagging project.

The KAUST team employs a wide variety of Whaleshark tagging and tracking techniques, including the use of satellite geo-location technology.  The critical task it to able to identify individuals with unique features so as not to count the same ones over and over again. Most if the tracking techniques involve installing a device or marker on the shark in a harmless way, but there are non-invasive that even you can use to help these scientists.

What is going on in Al Lith that is so attractive to them? Scientists just don’t yet know, but they are working on it.   Whalesharks mature once they are 7-8 M long. Only immature juvenile whale sharks have been seen in the Al Lith gathering. This is also the only place in the world where the gender ratio is 50/50;this is very unusual to have an even mixture of male and females.

Whenever you get the opportunity to interact with a Whaleshark, it is important to be responsible and not to harass the sharks.  Ecotourism has the potential to provide an economically viable alternative to hunting, but only if we tourists educate ourselves and interact with nature respectfully.