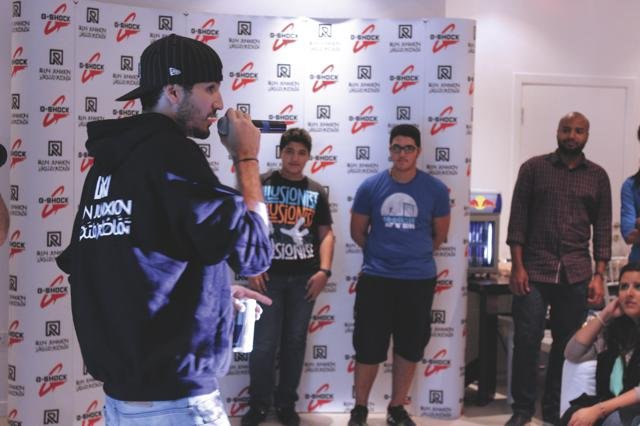 What a big night for Hip-Hop in Saudi Arabia, Jeddah to be exact! The Run Junxion, “Shock n’ Awe” album release party, sponsored by G-Shock, Red Bull and Ektimal, brought together hip-hop artists and hip-hop heads under one roof to celebrate a big night for a super group, a powerhouse of lyrical, conscious and relevant artists under one umbrella, a family by the name of “Run Junxion.”

The night was hosted by both Big Hass (Founder of Saudi Arabia’s first FM Hip-Hop radio show) and Qusai (The ambassador of Hip-Hop in Saudi Arabia). The night started off with Big Hass warming up the guests by taking them through the history of Hip-Hop, following Qusai who talked about how the group, Run Junxion, was formed and their impact in the Middle East Hip-Hop scene and how he views them as “The Middle East Wu-Tang.”

Lots of good vibes in just one place, Anas Arabi (writer, rapper and producer in the group) decided to take the wheel and introduce the album to the people and kicked it off with playing the track list, they displayed the ‘Monstarz’ video and also an unreleased video with breathtaking acting by the members themselves as well as genius directing by the one and only Sajeer Talha.

The feedback received from the crowd was very positive and uplifting, the Shock N’ Awe album was really rich in sound, it is truly a breath of fresh air in the Jeddah music scene, the instrumentals are undoubtedly of international standard and they were filled up with strong and impactful presence by each member of the Run Junxion group which is also unarguably competent toe to toe with probably your favorite MC’s internationally.

After the event we caught up with a few of the Run Junxion members, Anas Arabi mostly, and interviewed them.

Who is Run Junxion?
Run Junxion consists of 10 members, 7 rappers and 3 producers, who are gathered from all over the world and united as a family then formed a rap group in Saudi Arabia.

We have noticed a couple of cosigns from major music personalities in the west. Touch on that a little bit.
We have dealt with people like !llmind, Chino XL, Sullee J, Nino Bless just to name a few. We always approached people and they would always come back and give us props for the work we put out letting us know that they support us. This of course makes us believe in ourselves more and drives us to just keep pushing our music further and elevate.

So, why Shock N’ Awe?
Run Junxion is like a group of reporters, we report to the Middle East. Shock N’ Awe is the operation that George Bush called while attacking Iraq,
we took that and turned into a hip-hop angle.

What do you think the music scene is lacking at this point?
It’s lacking shows and support from the people here online. Those are the two main major things that are definitely needed.

Run Junxion at times tend to deliver very aggressive/political content. Talk about the acceptance of that in this part of the world.
We wouldn’t say aggressive, we are just trying to provide a wider variety of sounds in the music scene and really Hip-Hop in general. People that really listen and pay attention to the underground music scene here appreciate and relate to our content because it is raw and real and not the type of commercial music that you cannot really relate to. They appreciate hearing something new and different content wise and that is what we are giving to the people.

Any plans of signing to a major label or landing any sort of deal.
Show us the deals so we can at least consider them haha. We would definitely consider signing a deal.

What does Run Junxion aspire to achieve through its music and its image being portrayed to the people?
Balance. We aspire to restore balance in music. People are becoming less aware on what they should really be concentrating on and that there is more to the world than what some or most artists touch on. Moh Flow for example does this in a very nice way. He keeps it real and has that raw sound that still is commercially accepted. Do not abuse just one content just because it sells, you have to balance.

What is the importance of the companies (G-Shock, Red Bull, Ektimal) that sponsored this event?
It is very important because without them we couldn’t have had such an event like this. We cannot really always be paying from our pockets because we have a life and families to support, so them coming in doing all of this is very helpful as well as they earn other artist’s respect seeing that they support us this way.