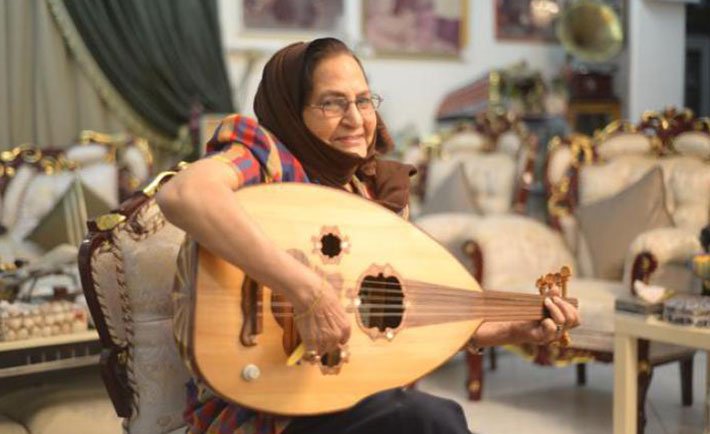 In a world where DJs and modern singers have taken over, Tooha remains true to Saudi’s historic and traditional music.

Destination was invited for coffee inside the famous singer’s home to discuss her history and everlasting love for music. Tooha is Saudi’s first female wedding singer. Her journey to become a famous corner stone of Saudi occasions and weddings in particular started long ago. She has been in the music field for 52 years.

Tooha’s house breathes the essence of history. It is filled with memorabilia from her past. Items from her childhood home still reside with her to this day, such as her mother’s old disk player and hand-made scrapbooks from her early years. As Tooha puts it, “I have seen history in the making and would not trade my memories for anything.”

For the love of music

Tooha grew up in a house that admired music. She describes how her passion for music started at a very young age and reminisces how she first learnt to play the oud. She says, “my brother, may he rest in peace, had an oud. Once when I was 9, I tried to carry the instrument hoping to be able to play, but instead it fell and got battered. My brother was very upset of course,” she adds with a laugh. “After that incident, my dad got me a Yamani oud. Both of them taught me how to play. My dad would always call me ‘Tooha the singer’ after that,” she continues.

Tooha then resumes, “I was number one on the wedding musical scene. Everyone else then followed.” She begins by saying, “my first singing occasion was a baby shower. Then, I performed at a big wedding, and people started asking for me after that. I even performed with my sister and cousin at times. Then I also recorded a few songs a long time ago.”

I don’t like questions that ask how society dealt with me being a female performer at occasions, because if it hadn’t been accepting, I wouldn’t have had this success.>

Tooha was always a familiar face at weddings. To her, the entire marriage institution has altered drastically. She explains, “girls have a say now. Back in the past, their parents would do everything starting from picking out the groom and they wouldn’t be able to say a thing. Now, girls pick and choose.” She observes how all aspects of weddings have changed by adding, “there is a lot of competition between wedding venues now, and each place asks for huge amounts of money. Back then, people used to have weddings on rooftops or even in the street. Things were a lot simpler.”

Tooha then recounts the difference between weddings in the past and now and says, “ Weddings have lost their core. Women go now to criticize each other. They look at each other’s gowns, hair, heels and makeup. That is what they notice and discuss, they no longer look at the woman’s soul.”

Being a musical legend, Tooha relates how the music these days does not convey Saudi traditions anymore as she elaborates, “Wedding music is very noisy now. You no longer cherish what you are listening to, because you can barely hear anything from all the banging. New instruments have infiltrated the Saudi music, so where do my oud and I stand? I am not going to change the act because I want to stay true to Saudi heritage.” Her advice to today’s singers is to “learn the basics and take it one step at a time.”

Unfortunately, Tooha does not appear in many weddings nowadays due to her health conditions, as she conveys, “I now focus on small gatherings only. I have been away from the wedding musical scene, but if I am invited and insisted upon, I go to a wedding and recite a ‘majas’, a few words for the bride.”

Tooha has come to realize that the one constant thing in life is learning. “People must always strive to learn more. By learning, we raise our nation high.” She is brave as she opens up about her fears and exclaims, “ I have no one to leave this heritage to. Yes, I have family members, but no one will ever preserve it or take care of it like I will.” But she concludes the conversation by looking around her memory-filled home and saying, “Alhamdulelah.”

Tooha is a proud Saudi woman who has dedicated her life to her art. She cherishes her traditions and memories and would never want to change her life course.