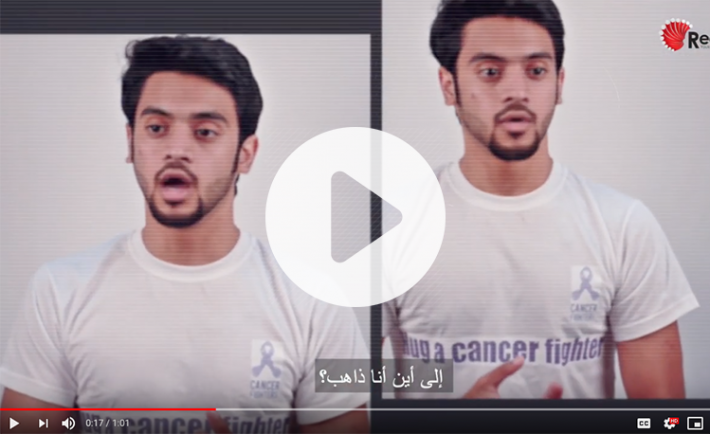 Hamza Iskandar, the cancer fighter, may God rest his soul in peace was well known for his optimistic attitude towards living a normal life and wining a battle against cancer which he eventually did. Hamza Iskandar lived a normal life after he was cured and sadly passed away due to a sudden heart disease which has no relevant to his past sickness.

The Red Sea Channel; is an online business guide which provides solutions and motivation to business, communities and individuals which gladly took the initiative to meet up with Hamza Iskandar in 2014 where he presented his personal vital role in fighting his disease and a setting a segment of motivation to all the concerned candidates who are either struggling with diseases or encountering difficulties or obstacles in their lives.

In 2018, Red Sea Channel had reconstructed the previous filmed episode with Hamza Iskandar by indulging new participants consisting of well-known figures from the community to shed lights on this important topic.

An event took place with a large gathering consisting of different segments from the community headed by Mrs. Nosheen Ahmed the mother of Hamza Iskandar who added more glamour and motivation to the event.

As gratitude and an appreciation to the role that Hamza Iskandar played in motivating the community via the previous episode which was presented by Red Sea Channel, the channel thought that it was their duty to revive his memory by continuing in the path that he started, which would encourage others to follow his footsteps.

During the event Mrs. Nosheen announced that the new cancer support center which was the initial dream of Hamza and his sister Hanna since the early days of their sickness, will finally be inaugurated soon under the name (Cancer Fighters Support Center) and will be located in Jeddah, to provide necessary treatments to those patients who have been treated medically and later require psychological treatment and cosmetic accessories.

Prior to the end of the ceremony, Red Sea Channel provided vouchers and discounted coupons to the candidates to use it during their visit of the center which was a happy surprise to Mrs. Nosheen. Those vouchers and coupons were provided by local companies and establishments as part of their corporate social responsibility which was highly appreciated by all the attendees.

This Segment of Motivation episode can be found on Red Sea Channel platform and YouTube channel.