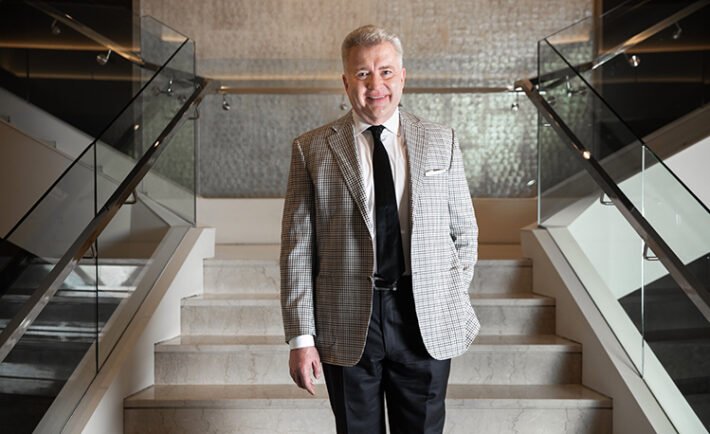 Four Seasons Hotel Riyadh at Kingdom Center, the most iconic hotel in Riyadh, is pleased to announce the recent promotion of Guenter Gebhard as Regional Vice President and General Manager.

A veteran hospitality executive, Gebhard joined Four Seasons Hotel Riyadh in 2019 as General Manager, following an extensive 35-year international career, taking him from Europe to the United States, Asia to Australia, and more recent years in the GCC and the Middle East. During his tenure, he has been overseeing all operational and commercial aspects of the Hotel including a substantial hundred million dollar renovation of the property. He also has been the main drive in attracting local talent onto the team. In his latest role as Senior General Manager, he had been supporting ongoing strategic expansion efforts of Four Seasons within the Kingdom.

“Guenter is a creative Hotelier with a strong track record of delivering results. In his new role, he will continue to oversee Four Seasons Hotel Riyadh and will lead regional responsibility for all operational aspects of our nascent growth in the Kingdom,” says Simon Casson, President- of Hotel Operations, Europe, Middle East & Africa at Four Seasons Hotels & Resorts. “Saudi Arabia is the most active destination for our region from a growth perspective with currently 10 new projects at different stages of development. We are fortunate to have a leader who shares the aspirational vision for the future of the Kingdom.”

Ideally situated in the heart of Riyadh, one of the most vibrant destinations in the Kingdom, Four Seasons Hotel Riyadh, with its newly renovated rooms and suites, is an appealing combination of modern luxury interiors combined with Saudi heritage touches. The Hotel is tucked inside the iconic Kingdom Tower, a familiar sight on the skyline and one of the most popular attractions in the city for tourists and locals alike.

“I feel honored and privileged to take on this regional role with Four Seasons,” says Guenter Gebhard, Regional Vice President and General Manager at Four Seasons Hotel Riyadh. “There is a rich legacy to draw upon as we chart our course for an exciting future ahead. With Saudi Arabia turning into a dynamic destination full of art, culture, and entertainment, I look forward to working with the team and the local community to further establish the Kingdom on the international stage.”

Born and raised in Nuremberg, Germany, Gebhard was always encouraged by his parents to travel and see the world. After attending the Hotel & Tourism Academy in Munich, Germany, he studied Finance and Management at the Stern School of Business, New York University. Gebhard’s prior experience in the Kingdom, and other GCC countries, and global work exposure are strong attributes that will support Four Seasons Hotels & Resorts growth in Saudi Arabia.