Game of Thrones theorists might have been on to something.

They weren’t lying when they said this season will be on fire from episode one. The producers literally said, and I quote, “Season six will be on the GO, GO, GO!” And I have to say that I am loving it. Bring it on, Game of Thrones! Jon Snow is back, Sansa is on the run, and Arya is finally NO ONE.

Jon Snow is back and he’s… grumpy. Sad Jon Snow is no longer just sad. Gosh, death does really change you. Also, chill with the third degree Melisandre. The guy just came back from the dead! Bummer, he’s seen nothing there. Which takes us back to the famous Eygritte quote “You know nothing, Jon Snow.” Was that what the wildling referring to?

Come to think of it, his death might be the best thing that has happened to Winterfell so far. Finally, Jon Snow doesn’t feel obliged to be protector of The Wall. Let’s hope his journey south of the wall takes him to Winterfell to cleanse it of the Boltons. It takes a bastard to kill a bastard, eh?

Arya Stark or No One?

What in God’s name is Arya Stark doing? Is she really becoming No One or is she so perfectly fooling J’aqen Haqar into thinking she became one? A girl has a list. A girl must avenge her family. A girl must remain Arya Stark to do that. Will the Faceless God support her killing spree in Westeros? I have a sneaky suspicion we might even see Arya Stark back in Westeros this season.

The Umbers: Oathbreakers vs Crazy Loyalists

Before talking about the treason of the Umbers, and how Smalljon Umbers decided to turn on the last Stark, let’s take a quick throwback to season one episode eight, when Rob Stark built an army against the Lannisters and Jofferey for imprisoning Ned Stark as a traitor. The Greatjon Umber (the current Jon Umber’s deceased father) stood against Rob Stark because he refused to let Umber lead the army. The Great Jon Umber was so loyal that he wanted to be the one leading the army. When Rob Stark refused, Jon Umber threatened to take his army and go back home. Robb Stark, angry, threatened to call Greatjon Umber an “oathbreaker”, which made the Great Umber even angrier, and drew his sword out. That’s when Grey Wind attacked him, bit two of his fingers off, and Greatjon Umber rose and laughed and shrugged it off as a joke. The Umbers remained loyal to the Starks until the Red Wedding, and have yet to pledge allegiance to the Boltons.

It is said that the Umbers honor oaths so much, that they’re willing to go to the moon and back to honor an oath, and that they would never take an oath just to break it later. This episode, particularly, is named Oathbreaker. Is GoT telling us that the Umbers are living up to Rob Stark’s prediction in season one, or do the Umbers have other cards up their sleeve and oathbreaker is a reference to Jon Snow leaving the wall? Let’s not forget that Smalljon Umber didn’t even swear fidelity to the Boltons yet. The direwolf could be any other direwolf, with its head seeming smaller than compared to Ghost or Summer.

Did Ned Stark hear his child from the future call him, or was it a coincidence that he turned? Does Bran Stark have another power? I have no prediction of where Bran’s storyline is going. But I am hoping we could learn a lot from these flashbacks, at least about Jon’s past. I love the fact that we are getting to know Ned Stark more because frankly I’m still not over his death. These flashbacks are a much needed form of therapy for me… and Bran.

To most fans, Ned is the most honorable lord we’ve seen on this show. But, as with every other GoT character, his honor must be challenged. The first lie revealed to Bran was the untrue story to cover for the dishonorable way Ser Arthur Dane was killed. It was either live and save your sister, or die with your honor. There’s much more than what meets the eye in this story, and in what Bran saw. I am hoping that the next lie exposed is Ned’s story about Jon Snow. 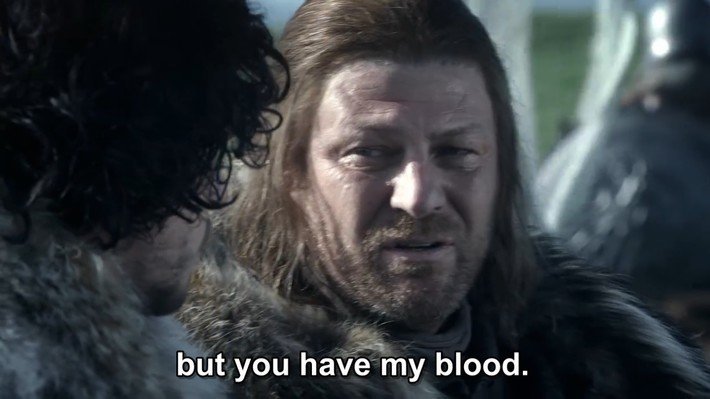 R+L= J anyone? (Warning: Googling this leads to some serious spoilers you might not want to know.)