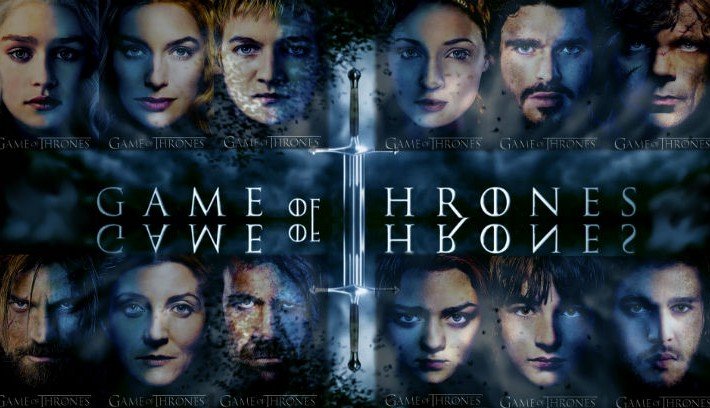 Where are all the hard core Game of Thrones fans? I ran into someone from college, who didn’t seem to recall my name but very much recalled the fact that I was a Game of Thrones geek as the only thing there’s to call about me, she said and I quote “OMG, the girl who speaks about Game of Thrones all the time!”.

The producers’ talents in changing events completely began to rise in this season. Events change in the sense that all consequences of previous actions taken by the characters began to appear, The Starks honour, the Lannisters wits, the Willdlings need for survival, and the Targaryan change of attitude. We also see how attitudes change everyone’s storyline, how Arya’s attitude and personality took her from King’s Landing to becoming the Hound’s companion, to Sansa’s attitude, from being looked at as the key to The North, and being thrown from one man to another in the hopes of expanding property and power.

The Lannisters deceitfulness and greed, I believe, is what brought them to become a great house. However I believe this fact is questionable, Tywin Lannister has done a great deal in building power through wealth and through making allies. It is quite ironic to me, how the reputation of the house is absolutely on top of everything else, including the happiness and the wellbeing of the members of this house. Everyone’s desires, dreams and ambitions are irrelevant and completely unimportant, all what matters is how much one owns from coins, gold or Valerian steel, how many of its children are knights, and who did their daughters marry. But who are we to question the course of these huge kingdoms, this reputation is what brings protection, safety and the respect of other houses.

Marrying Sansa to Tyrion and Cersei to Loras was such an ambitious move from Tywin Lannister. The irrelevance of the wellbeing of the members of the houses was at its peek when Tywin began to look at those people as mere commodities who hold prominent family names. Sansa, is merely a girl who holds the name Stark, thus, she is the Key to The North. Tyrion is nothing but a foolish Lannister who would be the only option that could be forsaken to go the North, and to father half Stark children. We need Highgarden and the Tyrells on our side, and Cersei is the only Lannister female we have. Mere commodities are nothing but time bombs and Tywin Lannister failed to see that in season three.

Deceitfulness and good intentions gathered in two of the most interesting characters; Jon Snow and Danaerys Targaryan. As much as I don’t like Danny, we can’t deny the character development is interesting, I believe that the actress Emilia Clarke definitely failed in developing with the character, and her actions have become too histrionic. When Jon Snow killed Halfhand in season two and deceived Eygritte throughout season 3 and 4, he unleashed an element that all Starks failed to unleash, which is the element of deceit. Deceit saved him, for the right reasons and intentions (some people might believe otherwise, but from a crow’s point of view).

We can’t talk about season three without mentioning Littlefinger’s famous Chaos is a Ladder speech. It is safe to say that this conversation between him and The Spider is the best dialogue that ever happened in the whole series. The amount of thought and philosophy is so rich, so humane and very terrifying in the sense that we seriously have no idea what this man is planning to build out of this chaos he’s made up.

The Starks honour and admiration for love and well-being took them from winning every battle, to losing the war. Robb Stark was at the age of 14 in the books, but I wouldn’t attribute his naiveness to his age, but rather to the lessons he learned from his father and from the Northerns in general. Marrying a highborn girl, but with a family name that is not as strong as the Stark’s is, I consider, a very naive move, looking at it from a Westerosi point of view. Marriages in that world are partnerships, they are about making allies and strengthening the name of your house, they are not about love or admiration. Being a king, and choosing your wife merely out of love is naive as it is dumb, especially after making a promise to a very vicious old man, named Walder Frey. 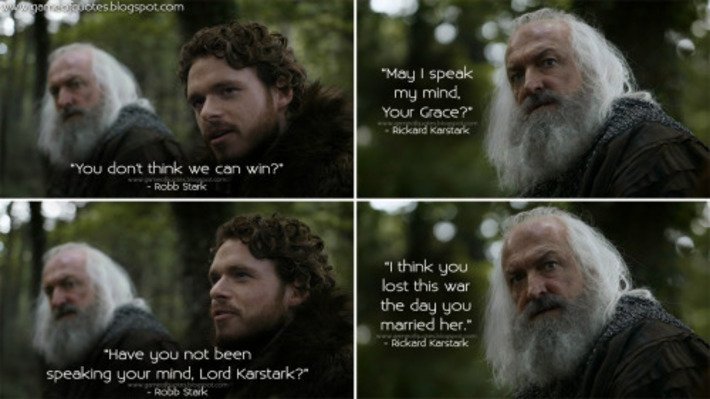 I came to this reasoning after a very long time of watching the Red Wedding, at first it was all cries and wails. Definitely I didn’t go like “You fool, you deserve that you stupid Northern greenboy!!”. In fact, in the 9th episode, I knew that the things between me and Goerge R.R. Martin are getting personal. And breaking up with this show will be very hard, because it already wounded me so much, it already took a lot from me, it was just too late.