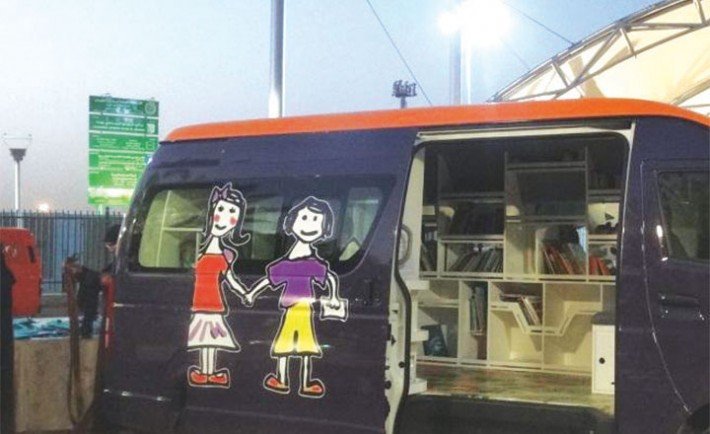 Friends of Jeddah Parks (FJP) in collaboration with My Library launched an initiative to create dedicated readers out of the inhabitants of South Jeddah.

Friends of Jeddah Parks started training a group of about 10 girls to read and appreciate books. My Library recently parked a mobile library in the middle of Princess Trabulsi Park (Amira Park).

Amira Park is a place where you can give your skills and time and they would be fully appreciated. There are always volunteers there, giving or doing something. The day My Library got involved; there were people from the Uswa club to give away backpacks and stationary goodies. Lina Al Maeena is also planning on coming for a sports event.

It is a vast expanse of green and paved walkways preserved only for the women and children of the area. The park is run and maintained by the board members of FJP and the local community. During late afternoons, you’ll find a lot of activity at the park.

They were taught:
–  Taking care of books.
–  How to read a story to a child in an engaging way by changing voice, tone, expressions, etc.
–  How to ask children questions about the story and its outcomes.
–  Helping children read.
– Crafts

Girls of all ages and women just hang out as a community there. They know each other well, and if someone doesn’t show up for a few days, they get concerned. During today’s fast paced life where people normally don’t pause to connect with others in their community, people at this park portray a beautiful picture. They all help each other, they ask about one another, and aid each other to learn and grow.

A lot of people just want to give back to the community. When Zakia Bundakji, a board member of FJP, was initially setting these programs, she realized that there is so much out there that can be brought it in.

Bundakji believes that the collaboration between FJP and My Library is an amazing partnership. She went and visited places that carry out similar programs in parks, learned from them, and brought the best local practices back with her. She’s passionate about building cohesive and conclusive communities. Such programs aid in this mission of building structured communities.

When afterwards My Library visited Amira Park, they saw the positive impact the books were making on the children. My Library realized the volunteers would benefit from an improvement in their communication skills and from training with My Library. So the volunteers gave up their Saturday mornings for 7 weeks of training.

These volunteers are role models for the children who go to Amira Park. They had never seen a real library before. Now, they make their own poems and stories.

This inauguration between FJP and My Library is a partnership created to promote awareness for the park’s patrons.

My Library and FJP cover children’s programs over some of the following categories:
– Educational
– Environment
– Health
– Social Skills

Samira, one of the board members, believes that having these environmental health programs provided the children with communication skills and personality development, and that it was an amazing thing for the neighborhood. She believes that My Library has been most magnanimous; it asked what the people of South Jeddah have always been waiting to be asked, and then granted them their wishes. FJP were also crucial for this change; it wanted the girls trained so they could pay it forward to other park patrons.

My Library has been open for 11 years; it was started by a group of nine mothers with no experience in the field, just the desire to create a beautiful place for mothers to come and read to their children, and to instill a love of books and reading. Their mission has always been to serve and educate the community. My Library is a non-profit organization, so the community’s donations help run and support this project.

My Library and FJP is a match made in heaven. My Library plans to continue providing books and resources for Amira Park, and to support them with training when needed. My Library (in Rawdah) hopes to repeat, at Amira Park, some of their crafts, activity days and special events. FJP wants to create global best practices amongst the park community and have them building cohesive communities that are closely knit together.