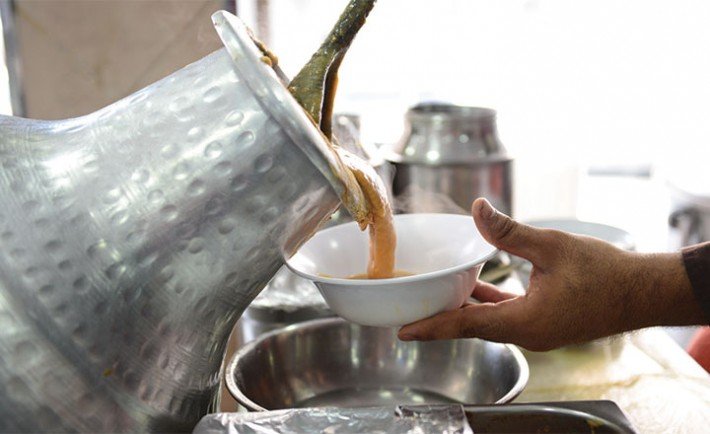 Fool mudammas is food for the rich and the poor alike.

The Arabic word, fool stands for fava beans, while mudammas is a Coptic word, which translates to being buried.

Mudammas refers to the cooking method where fava beans are buried inside an oval pot with a small nick, specialized for preparing the fool slowly over low flame for around 12 hours. It is not an actual burying but the conditions in which it is cooked simulate burying something in a dark environment. There are a lot of odd techniques involved in the  preparation of this famous dish.

Despite the Central Asian region being the main place of origin of fool, the first recorded use of this dish dates back to pharaohs in Egypt.

Nowadays it’s considered the most popular food in Egypt. It is consumed on a large scale as a main meal for breakfast or even in sandwiches, and most of the time it is eaten for dinner.

Egyptian fool is cooked more often as whole pieces and some prefer it partially mashed.

In Saudi Arabia, however, it is mostly mashed with very few whole bean pieces. Fool mudammas is served with certain types of bread, like the Afgani tamees or the traditional Ottoman shuraik.

That’s the beauty of living in Hijaz; it brings all flavors of the Muslim world together to form a delicious mix.

The art of Hijazi fool doesn’t just stop with bread; many more traditions are adopted from other cultures, like using spices and condiments such as garlic, cumin and olive oil or ghee. Sides are also added, such as pickles, onions, tomatoes, parsley, duggus (parsley in hot chili sauce) and tahini.

We actually went to the extent of making Fool Mubakhar, which is smoking the fool. Ramadan is the most popular time when smoked fool is savored.

Fool mubakhar stands for smoked fava beans. The basic technique is to create a tiny pond of oil or ghee in the middle of the fool or in a tinfoil, then to dunk a little piece ofcharcoal in it and seal the dish tightly for ten minutes. The smoky flavor gives the dish a grilled effect and the feeling is sensational to your taste buds.

Ayman Al Junaid, owner of the four branches of Taibat Al Hijaz, meets his customers’ demand by presenting this dish throughout the year. This is one of the very limited local spots that also have a family section.