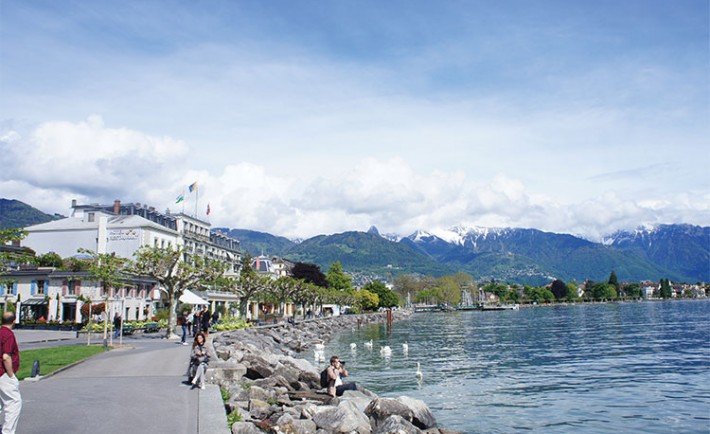 A trip bracketed by the view of the Swiss Alps and an exciting Olympic Museum tour.

Through the oval windows of the plane, the frosty white tops of the Swiss Alps greeted us into Switzerland. Indeed, we were heading into a land of peace, beauty and chocolate. Our trip was made perfect by the Switzterland Tourism team.

We landed in Genève’s airport and took a train straight to Montreux located on Lake Geneva (Lac Leman). The shoreline is famous for the annual Montreux Jazz Festival. 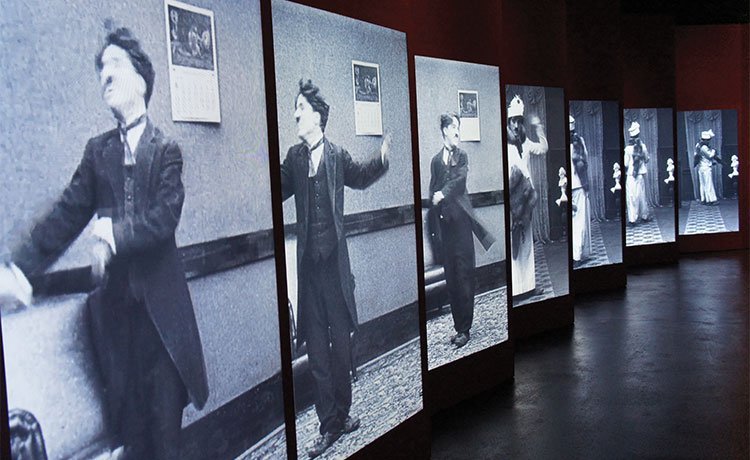 We settled into Fairmont Le Montreux Hotel, a comfortable hotel perfect for international travelers. At the Montreux Jazz Café, dinner was accompanied by a view of the lake at night. We ate a delicious local fish topped with a drizzle of a lemon pepper sauce. The fish was served with a side of green mashed potato and an avocado sorbet salad. After dinner, we explored the sleeping Montreux’s historical streets while getting a sense of the city’s energy. 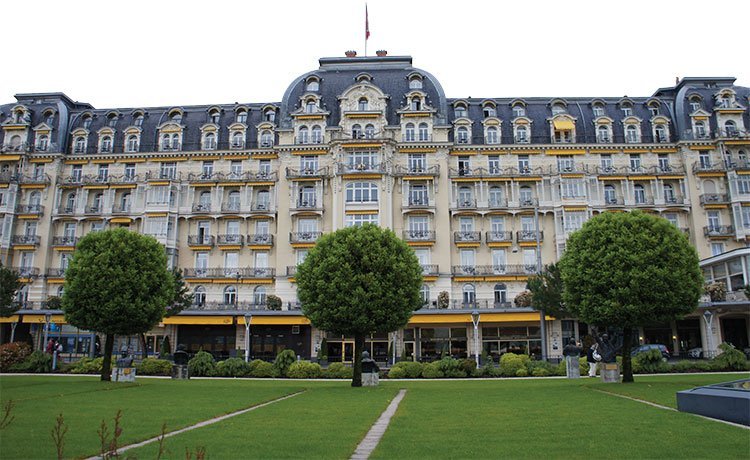 After a pleasant breakfast at the hotel, we went to Vevey to visit the home where Charlie Chaplin spent the last 25 years of his life. His house opened to the public on the anniversary of his birthday on April 16 this year. 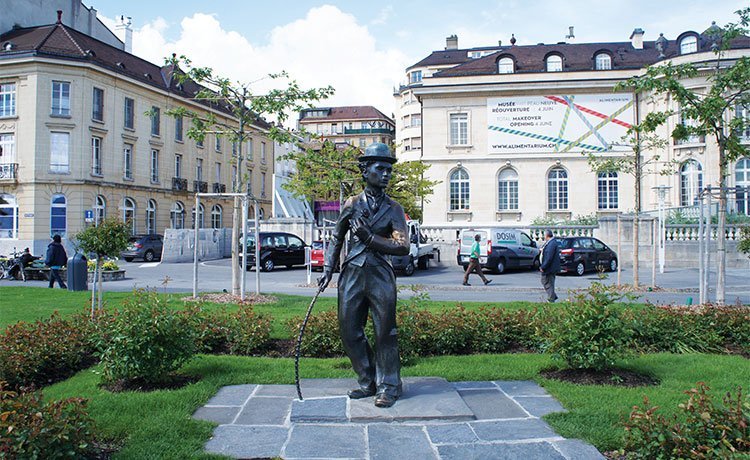 Today his house consists of the main house, the studio, the garage turned into a gift and souvenir shop, and a restaurant. Walking around the rooms of his house we came across relics of his personal and professional life. The walls were lined with screens showcasing his work along with lifelike wax figurines of some of the significant influencers in his life. We watched one of his short films in the theater and once it finished the screen lifted up to reveal his studio that contains original pieces from his sets. 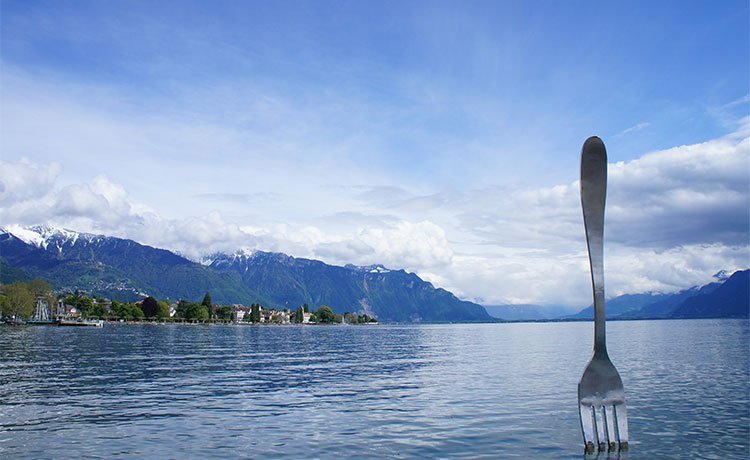 Later we visited Vevey’s town market, which is the second biggest in Europe. Not too far, the world biggest fork sticks out of the lake in front of Alimentarium, a food museum. A fulfilling dinner in Safran Montreux concluded our day.

We checked out from Fairmont and headed to Chillon Castle, an ancient floating Castle on the shore of Lake Geneva (Lac Leman).

The architecture on the islet was breathtaking. Walking through the halls we found ourselves admiring every pillar and detail. The castle also included exhibitions of weaponry and renovated murals. 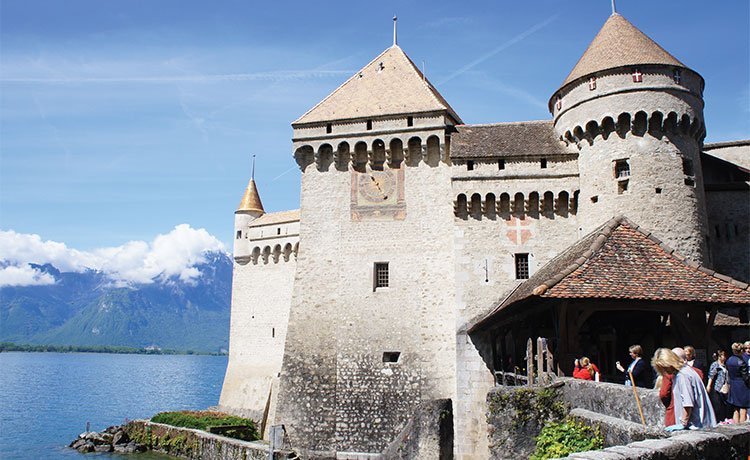 After our dose of history we stopped at Montreux at le Palais Oriental for some Iranian cuisine. We were served a traditional platter mezzeh along with grilled meat over fragrant rice.

On the pier, we took a moment to appreciate Montreux before catching a boat to Lausanne. We revisited some of the city’s monuments and then greeted Lausanne.

We stopped for some coffee at the newly renovated Royal Savoy, and later had dinner hotel Beau-Rivage’s restaurant Café Beau-Rivage.

The weekend livened up the city, and the hustle and bustle of the residents gave us an intimate look at life in Lausanne. Every Wednesday and Saturday, people come to the downtown area to sell their goods. The hullabaloo of the marketplace created a fun atmosphere to shop in. The city’s personality is reflected in its many opportunities for shopping, especially in the posh street Rue de Bourg. After buying enough cattle figurines and chocolate we headed on to the culinary highlight of the trip. 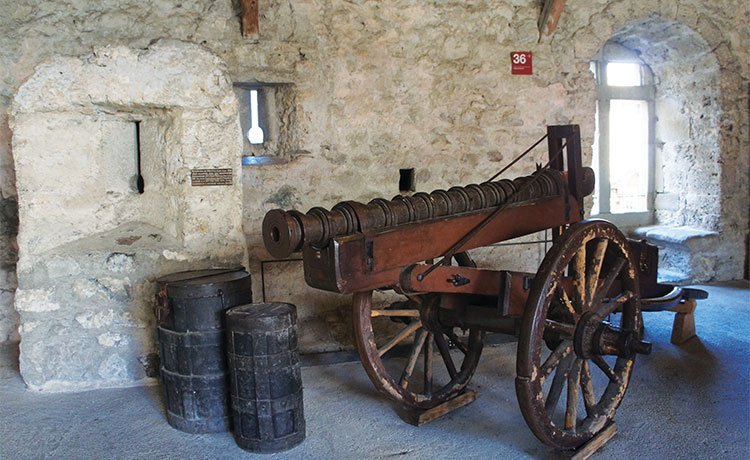 Lunch was at the acclaimed restaurant Eat Me which offered a taste of various cultures. Each page in the menu represented a continent and each small-portioned dish was flavorful. The cozy ambience and delicious bites combined into a great dining experience. 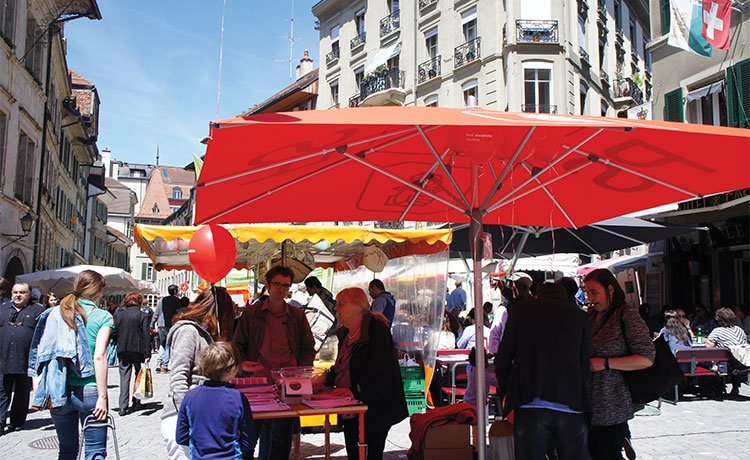 Our last day in Switzerland was dedicated to the Olympic tourism. The Olympic Museum showcases the vast history of the international sporting competition. One room was dedicated to the countries that have hosted the Olympics. Perhaps the best room of all was the one that displayed Olympic torches from every Olympic event in history. The museum also commemorates the Greek history and culture behind the games. We ended the tour with a walk outside where statues of athletes stood tall. Later we ate brunch at TOM Café, which is situated at the top floor in the museum. 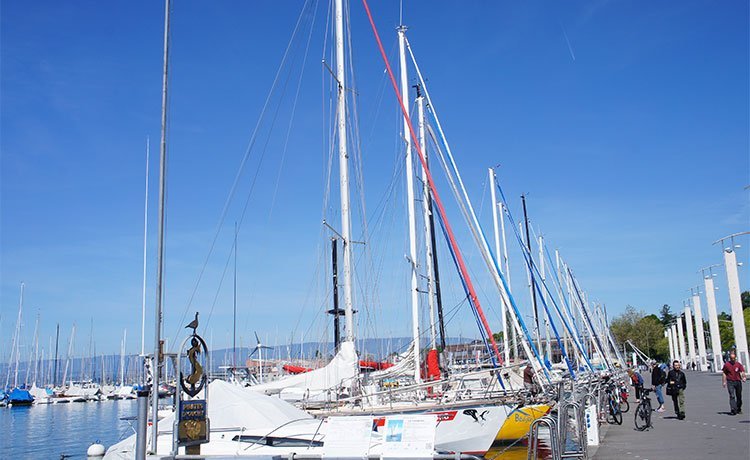