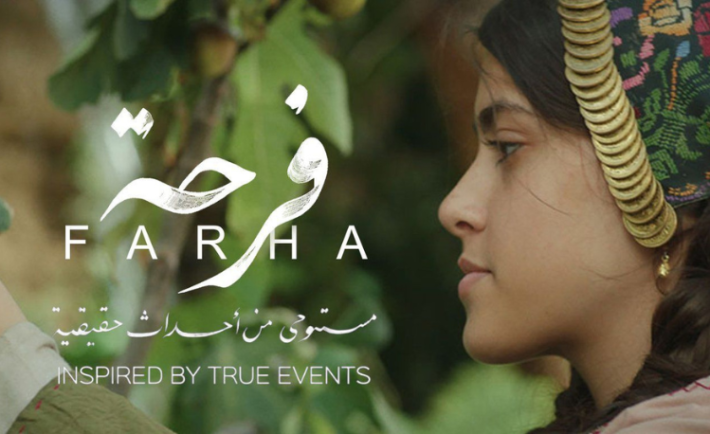 The story of Farha is worth being told and heard by thousands of people from all over the globe. With the historically accurate film, we give a round of applause to the director Darin J. Sallam for creating a visual from words that have been said and expressed for years now.

We have always been told stories of the Nakbah whether it be from the living room of grandparents or during road trips with our parents, but to be told from a visual perspective, it has attracted an emotional sense of feeling to a whole new level. The story begins in the early days of the Nakbah/catastrophe in 1948 and is expressed through the eyes of a 14-year old girl, Farha who despises the gendered traditions. With an imagination spreading so far, Farha asks her father to let her move to the city for education and after a long journey of convincing, her father agrees, and just as things were about to get smooth, everything negatively shifted 360 degrees. The movie was directed so perfectly with the aims of depicting the true colors of this brutal narrative. The beginning draws a precise depiction of the Palestinian life and how it looked before the catastrophe.

Taking the scope of tragedy that the country and its people have gone through into consideration, ‘Farha’ depicts the calamity on a lower scale (from a small storage room) yet manages to volumize the catastrophe respectfully and on point sending the right message out to the people who need to hear it.

The emotional journey with ‘Farha’. We can safely say, this movie deeply played games with our mental state while watching, quickly shifting our mood from joyful to sorrowful. The acting of Karam Taher, who plays Farha, was incredibly portrayed through different scenes and the visuals were artistic throughout the entire movie.

It’s all rainbows and unicorns, right? Wrong. What goes on in a teen’s mind usually is daydreaming about life and its adventures, but that all was taken away when she walks into the chaos that starts in Farha’s world when she refuses to escape and leave her father behind.

A huge defining aspect in the movie is time. After her father locks her in the storage room for her own safety, you can slowly see and feel the stress, terror, concern, and anxiety. The first sign defining the time passage is when Farha drinks from a pickle jar as a sign of thirst giving away that she has been spending some time locked up. Not to spoil the rest of the film but that is one of the examples from what she experiences.

Her locked-up journey gave us a lot of perspective with different series of events happening right outside the tiny room that we got to see through the door cracks. With the different occurrences, one incident was devastating where a mother gives birth to her new born just outside the room only to get captured and killed with the baby left to live a slow death. Being Farha’s company during her journey, we accompany her as she slowly sings a lullaby to help calm the baby.

The change of color based on portrayal. Portraying happiness and content, the movie begins with vibrant colors including Farha’s blue room and the cast’s colorful traditional wear. Towards the end, we notice a huge shift in color where it lowered to dull and dark symbolizing sadness and the remarkable art the camera does.

As we joined in on her experiences and everything she went through in this little time, deeply connected us to Farha, engaged us and drew a connection between us, the viewers, and Farha.

For more on the journey of Farha, make sure to watch the movie on Netflix