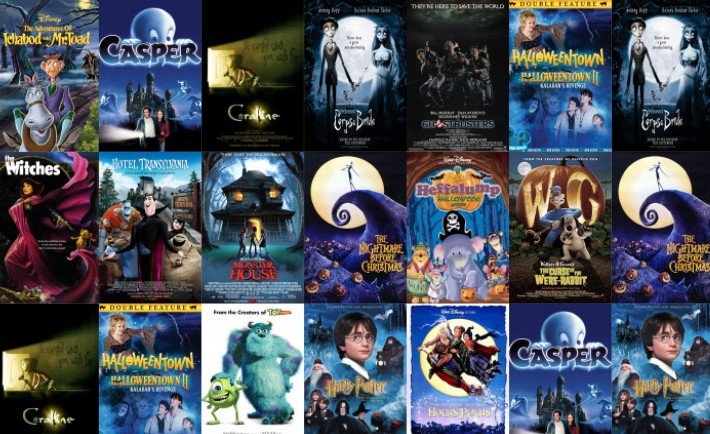 While you should watch Harry Potter at any time of the year (can you tell we’re fans?), Halloween seems especially appropriate. There is something about Harry boarding the Hogwarts Express that really evokes that start-of-the-school-year, fall feeling. Oh…and there’s magic and witches, too! The first few movies are aimed at younger children while the later ones are better suited to their older, tween siblings.

After moving to Salem, Mass., teenager Max Dennison (Omri Katz) explores an abandoned house with his sister Dani (Thora Birch) and their new friend, Allison (Vinessa Shaw). After dismissing a story Allison tells as superstitious, Max accidentally frees a coven of evil witches (Bette Midler, Sarah Jessica Parker, Kathy Najimy) who used to live in the house. Now, with the help of a magical cat, the kids must steal the witches’ book of spells to stop them from becoming immortal.

Dreamed up by Tim Burton, The Nightmare Before Christmas tells the story of Jack Skellington—the “King of Halloween”—who, tired with staging Halloween festivities year after year, finds a door to Christmas Town and decides to try his hand at that holiday, instead. We dare you not to have the songs from this musical flick stuck in your head for days after watching. “This is Halloween” should be the unofficial theme song of October! Best of all, it also makes a great Christmas movie.

Recommended Age: 7 and Up

Casper (voiced by Malachi Pearson) is a kind young ghost who peacefully haunts a mansion in Maine. When specialist James Harvey (Bill Pullman) arrives to communicate with Casper and his fellow spirits, he brings along his teenage daughter, Kat (Christina Ricci). Casper quickly falls in love with Kat, but their budding relationship is complicated not only by his transparent state, but also by his troublemaking apparition uncles and their mischievous antics.

No adults believe three youths’ (Mitchel Musso, Spencer Locke, Sam Lerner) assertion that a neighboring residence is a living creature that means them harm. With Halloween approaching, the trio must find a way to destroy the structure before innocent trick-or-treaters meet ghastly ends.

After learning she is a witch, a girl (Kimberly J. Brown) helps save a town full of other supernatural creatures.

Roo (Nikita Hopkins) and Lumpy (Kyle Stanger) gather the courage to search for the Gobloon, a creature that can grant wishes.

While visiting the seaside with his grandmother, Luke stumbles upon a convention of witches who are hatching a plan to exterminate children. He must find a way to stop them—a task that seems infinitely harder once he is turned into a mouse. The witches are scary enough to give us a fright—especially when they peel off their human costumes.

Recommended Age: 8 and Up

Based on Neil Gaiman’s popular “children’s horror” novel, Coraline is in many ways similar to Alice in Wonderland—only creepier. Unhappy about relocating to a new house and leaving all her friends behind, the gutsy heroine discovers a door to an alternative world. There she finds attentive, doting versions of her real parents and other exciting wonders. But this new world is more dangerous than it seems and Coraline must find a way to rescue her family and herself.

Recommended Age: 9 and Up

It’s bedlam in the Big Apple when ghosts run amok in New York City. A ragtag team of professors-turned-exterminators sets out to capture the unruly haunters and prevent a disaster.

What Kids Like: Get your proton guns ready. These phantoms pop up faster than the ghostbusters can zap and bottle them. The biggest demon turns out to be all fluff: the Sta-Puft Marshmallow Man.

The second of three films to come from the twisted mind of Tim Burton (let’s face it, there could’ve been more than three on this list) was released in 2005 and features the voices of Johnny Depp and Helena Bonham-Carter as an unconventional couple that doesn’t let a simple thing like death get in the way of a good relationship. Animated in a traditional stop-motion style, this macabre tale is based on a piece of 16th Century Russian-Jewish folklore called “The Finger.”

Pixar Animation Studios is responsible for this 2001 comedy, as well as this past summer’s prequel Monsters University. Billy Crystal and John Goodman respectively provide the voices for Mike Wazowski and John P. “Sully” Sullinger. Don’t be fooled. They might have human-sounding names, but these two closet-dwelling creatures have one job and one job only — to scare the pants off little kids. But they’re not doing it to be mean, but rather out of necessity, as the monster world’s source of electricity is children’s screams.

Wallace and his loyal dog, Gromit, set out to discover the mystery behind the garden sabotage that plagues their village and threatens the annual giant vegetable growing contest.