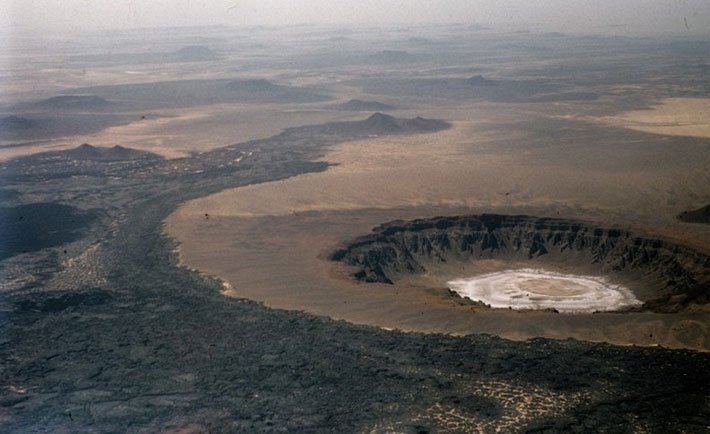 Like most road trips in Saudi Arabia, ours began with advice on how to apply dishwashing soap to the front of the rental car.

Khaki-colored hoods are a quintessentially telltale sign of a Saudi car on a long drive, much like the presence of Vimto in grocery stores during Ramadan.

Fairy is apparently the preferred brand but paint defender sprays purchased from gas stations work just as well, although they lack ingenuity. The end goal is to ensure the front portion of the vehicle is protected from effectively being sandblasted as you clock around 170km/h (105m/h) on your drive.

We had about 700 kilometers of driving ahead of us to arrive at our first destination on our weeklong road trip, the Wahba crater, the largest of its kind in the Middle East; two bottles of the protective spray were purchased. 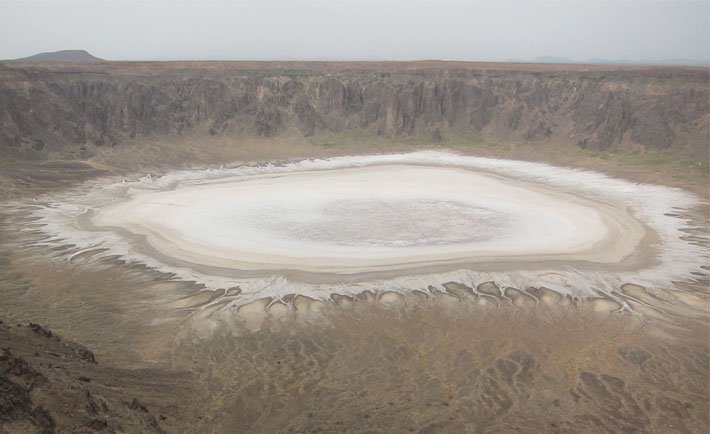 While driving, the sand surrounding the highway becomes ubiquitous and invisible. Yet, between looking out for traffic police cars lurking under camel overpasses and the speed camera and radars the surprising diversity of Saudi Arabia’s landscape materializes.

Rock massifs, volcanic cones, almost extraterrestrial rock formations, intertwined with date palm farms with brown and yellow parched leaves, and free-roaming camel herds made up the drive to the crater.

The landscape ranged widely on the drive, and as we got closer to the crater the scenery became increasingly rocky and surreal. You can see a variety of soil colors and textures, ranging from extreme red to almost white, but the rock formations were the most startling aspect.

Not enough can be said about the eerie rock formations that emerge seemingly out of nowhere in desolate landscapes.

Comparisons to the topography of Mars were made repeatedly, which helped me decide on my subsequent career as a location scout for sci-fi movies, if Saudi Arabia ever does decide to open up to Hollywood film crews.

About six hours later we exited off the main Riyadh-Makkah highway and drove through several very small communities and lava fields until the end of the newly paved road, where four metal poles stop cars from driving any further. The road ends exactly at the crater’s rim.

The crater is spectacularly massive. It is roughly 2km wide, situated on the edge of the Harrat Kishb lava field.

The edge drops vertically by around 250 meters to the base, making for an extreme cliff edge.

According to Saudi Arabia’s National Center for Earthquakes and Volcanoes, the crater is a result of a “phreatic explosion caused by the near-instantaneous generation of steam at the contact between rising magma and ground water.”

In layman terms it means very hot lava came into contact with water, causing a massive instant eruption, resulting in this huge hole in the middle of what is now a desert.

The crater’s floor is a saltpan; the center almost entirely covered by a thin white sheet, although apparently in the winter it turns into a small lake.

We arrived right before sunset. The intense color disparity between the backdrop of the black lava fields, white salt at the bottom of the crater, and a blue sky tinged with the gold of the setting sun made for an impressive end to the drive. Photos sent to a Saudi friend promoted an incredulous response: “Are you guys even in Saudi?”

It’s impressively enormous in real life, and the photographs don’t do justice to the loneliness of the crater’s isolation.

The photographs also fail to capture the echo of the wind blowing over the lava field and that, quite possibly, was the best part.

Side note: The Wahba Crater is under the protection of the National Commission for Wildlife Conservation and Development (NCWCD) who strive to promote ecotourism. Camping is permitted but there are no amenities provided for visitors, and those who decide to camp are asked to also take away any trash they accumulate to preserve the area.