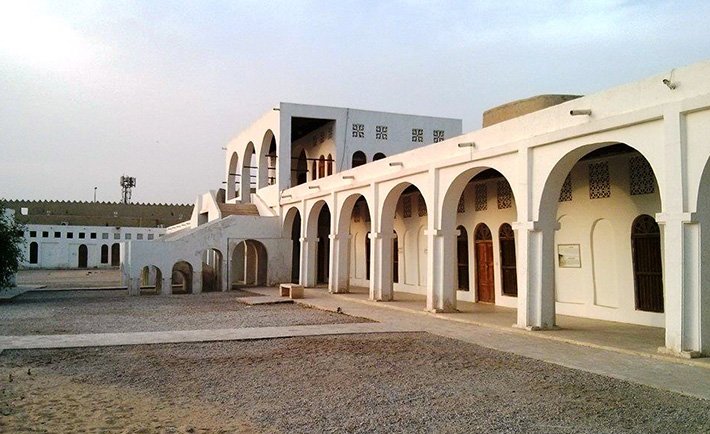 The palace of the former governor of Al Ahsa region continues to be the most famous landmark of the city of Hofuf. And rightly so, being a fort like palatial complex, mud built yet strong like other grit structures it sits right in the heart of the city.

Built at a time when the Hofuf was a small oasis village, the whole city then started expanding beyond it and eventually Ibrahim Palace managed to become one of the most formidable palatial complexes in eastern Arabia with the city growing around it as the region continued to flourish.

With a flight to catch from Dammam in the night and evening just beginning to set it, time permitted us to see only one place in Hofuf and we chose to visit Ibrahim Palace. After rushing through the crowded streets of Hofuf, our GPS led us straight to the remarkable palace. 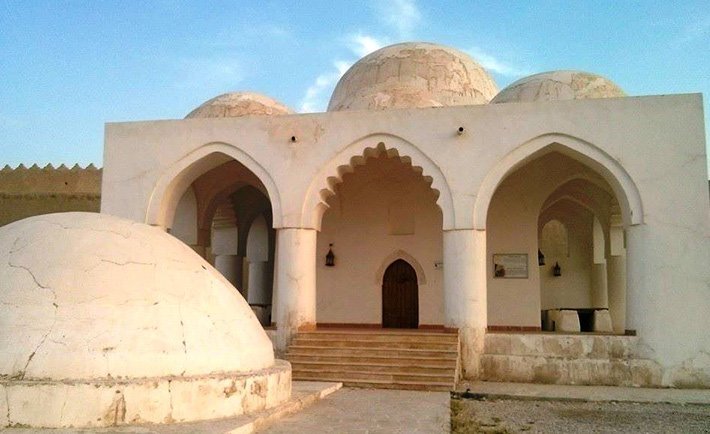 Construction began on the palace in the year 1577 AD and was completed on 1591 AD. Sprawling an area over 16000 meters this fortified palace was the biggest of its kind in the eastern part of the country.

We entered through a small door that led us into an arched chamber from where we entered the courtyard of the palace. We started exploring from the right, walking through the corridor crossing numerous rooms that run all across the palace – all for a different purpose of course. The corridor consisted of semicircular arches which were decorated by gypsum and had roofs that were fortified by palm trees. 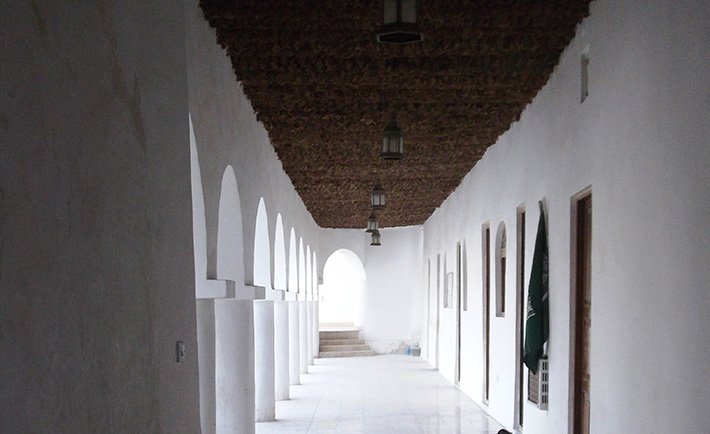 On the South West corner of the palace was the palace mosque known as Masjid Quba, whose enormous dome can be seen from outside the palatial complex’s tall walls. In fact the entire mosque is covered by the dome. White washed, the mosque stood grandly in the large courtyard. Across Saudi Arabia there are very few old mosques that still exist in their original form, this happens to be one of the lucky ones. The architecture was particularly remarkable unlike anything I have ever seen with arches running all across its columned exterior. Unfortunately it wasn’t open and we were only left to guess on how its interior looks! 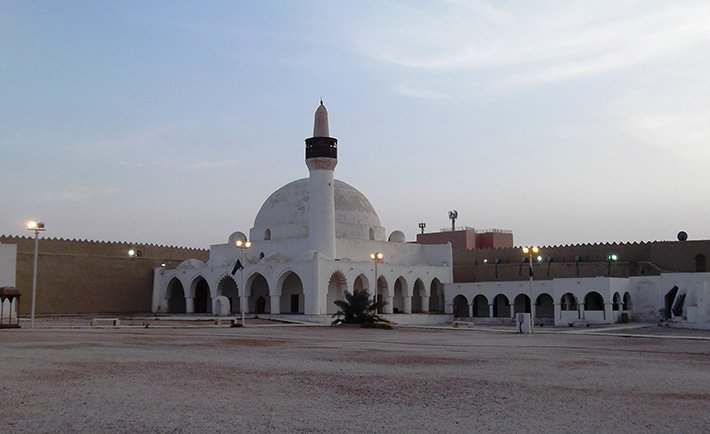 Adjacent to it is the armory that has an underground vault. We proceeded through the narrow opening and steep stairs that led into it. After waking through a maze like tunnel we reached the underground vault that had a domed roof.

After enjoying the echo in the vault for a while we proceeded towards the guards dorms. The dorms are divided in 2 portions that run from north to south and consist of long open wards. The dorms had numerous doors and each door had arched wooden windows on top, which were decorated by colored glass triangles. Currently the dorms house a small museum which showcases items dating back to the palace’s golden days, which include articles such as armor, kitchenware and numerous photographs. 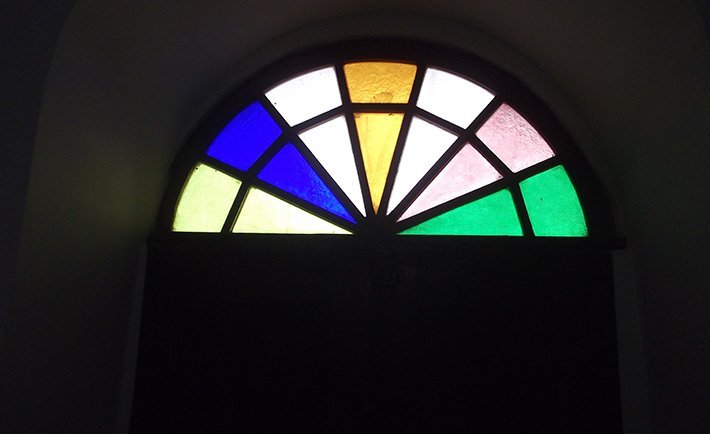 It was only after seeing these photos of not such a distant past I realized how great a job has been done in restoring the palace. In the photos the mud walls of the palace had severe cracks in them revealing the stone foundation underneath. Ibrahim Palace has been restored using splinters and planks of wood that have been affixed with mud. 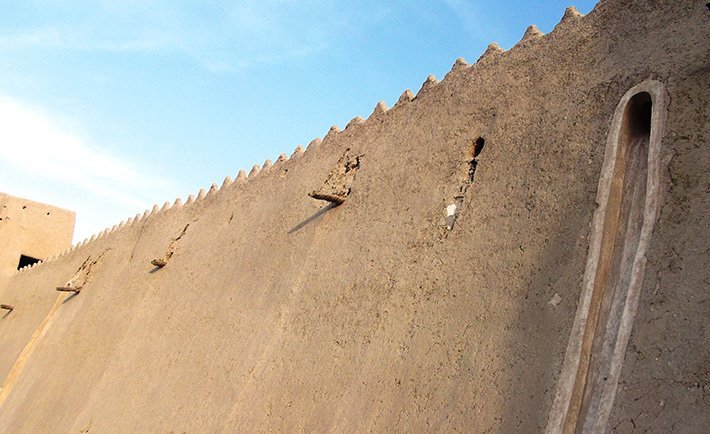 Rows of LED screens were pinned to the museum walls that were displaying nothing other than our reflection through their black screens. In front of the museum a grand entrance leads up to the royal rooms on the upper floor which unfortunately remain closed for tourists. There is also a communication room that stands behind the stairs to the upper floors. This room is the last structure that was built in the palace during the reign of King Abdul Aziz. Next to which are the horse stables which were closed as well. The horse stables were particularly big and occupied most of the northern part of the fort. The small numerous doors of the stables dotted the northern wall. 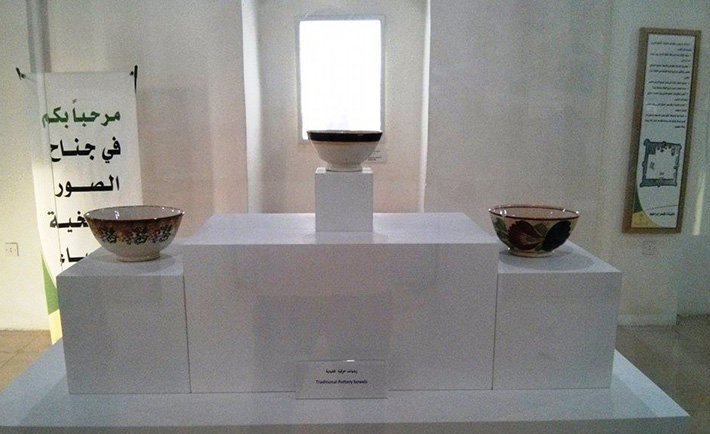 After walking past the locked doors of the horse stables we reached the remnants of the Hammam (traditional bath). It was a glimpse of regality that the governor enjoyed. Unfortunately only 1 room survives which is the cold room that has been decorated with small glass windows that create a half-light and has a pool in the center with several corridors surrounding it. Next to it was a deep well that was the source of water to the palace; it has pipes that connect it to the Hammam and the palatial mosque. 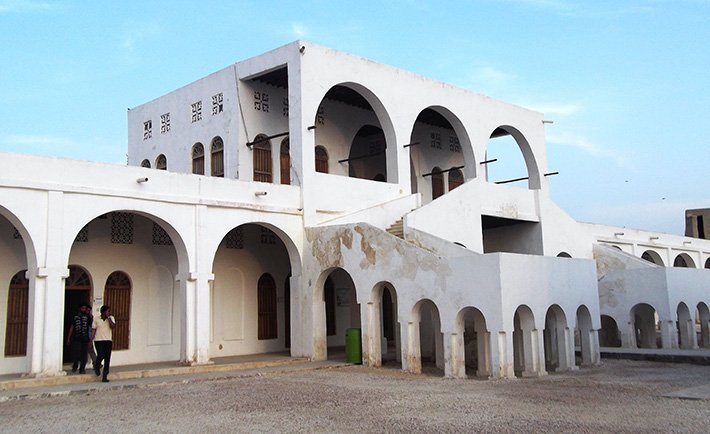 As we were walking away from the place I felt that while the exterior of the palace fails to impress, it is the inside that makes up for it, the most remarkable structure in it being the centuries old mosque.