The theme for this year’s art week was Earth And Ever After. The annual art exhibition started off at Gold Moor (Shataee District) which showcased several renown artists works as well as a few emerging artists. The whole theme revolved around how we can be kinder to our mother Earth. 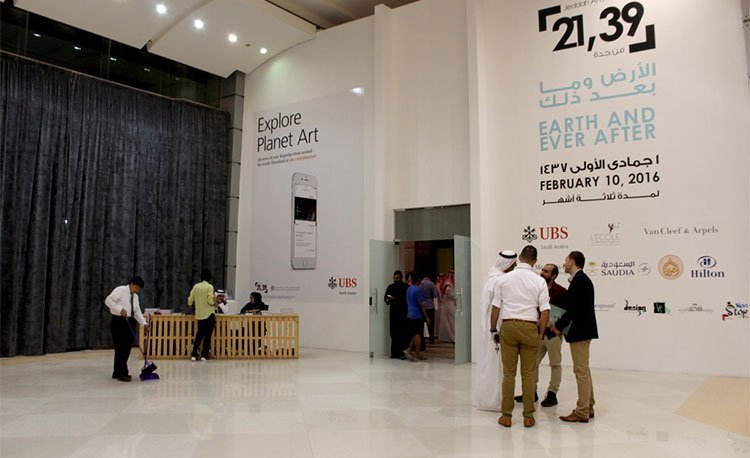 Earth And Ever After

“The Earth is the collective memory that is bound to our subconscious. She is a reflection of ourselves, manifesting herself as a constant flow of images that teem with scent, taste and color.” 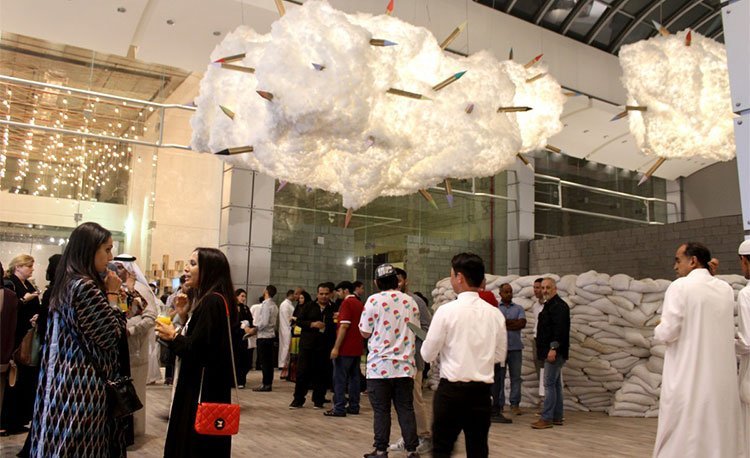 Many of the pieces were recycled or upcycled. As you walk in, you are greeted by Pascal Marthine Tayou’s Clouds suspended above Ayman Yossri Daydban’s formation installation. Daydban’s work focused on these essential questions:

“How does earth retain its eternal memory as an absolute truth without even having an image? How can a handful of soil simply become an immortal, eternal and invincible soul in an imaginary body with no image or form? How can the past become the present, the future, and an eternity as though it were one solid entity that doesn’t end or wither away?” His work speaks of historical, political and deeply personal issues. In the piece exhibited at Earth And Ever After, he created a circular cave of sacks made of Umrah garments filled with sand from Makkah.

The exhibition was partitioned into 4 sections: Earthly Heritage, Lay of The Land, Beautiful Earth and Ever After.
These are some of the highlights of the exhibition.

Works of prominent artists reminded us of our roots and earthly heritage here. A huge expanse of cave painting style work was displayed on paper in acrylic and pen on a wall. This was done by Ola Hejazi and was titled, Life & Survival.

“Between the Beginning and the End lies love, conflict, war, and peace. The secret of the human is to survive these.”

Then Madeha Al Ajroush’s work on prehistoric rock art in Najran. It explored the relationship between humans and landscape: prehistorically humans used the landscape and rocks to communicate by drawing human figures and animals.

A collective artwork adorned the far side wall and was labeled “Al Ghat” which s an expression of an art arisen out of the villagers feelings, enthusiasm and deep passion for fields of wheat, plains and valleys. It is the expression of ardor between purity of spirit and generosity of harvest. It was supervised by Artist Fatimah Faya’a with participating Artists: Fozya Mohammad, Salha Yahya, Habiba Mohammad, Seham Youssef, Shareefa Mohammad. 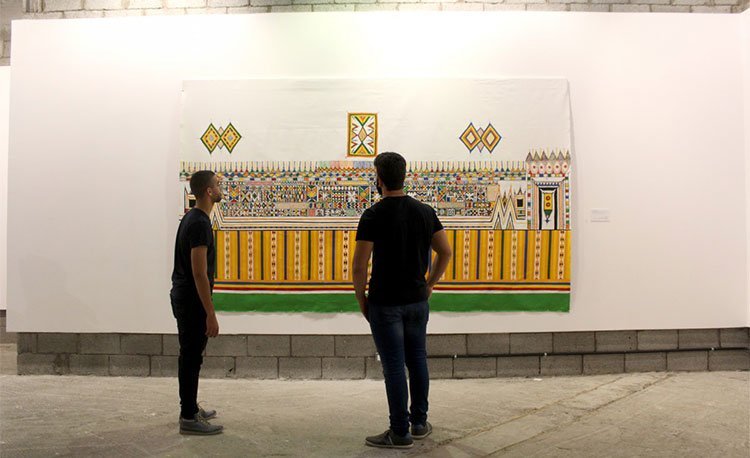 One of the most notable works was titled “Sidelines” by Manal Al Dowayan.

It is a hand woven Sedu made of wool and cotton thread on a metal frame, 2015. This project focuses on a social group on the brink of disappearance. Women who work in crafts in the various regions of Saudi Arabia today face extreme poverty and societal exclusion. These artisans in one generation have been pushed from the center to the sidelines of their communities. This artwork is hand made by beduin women. The weave was never completed and unravels at the bottom and remains hanging in piles of thread. The shape is also of an unraveling circle, a representation of the idea Sidelines. 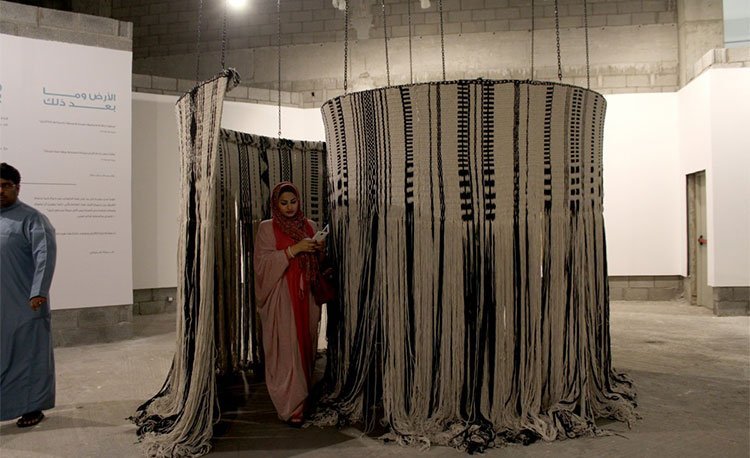 Lay of The Land:

This part of the exhibition focused on the geography of earth.

Suha Shoman’s ‘Bayaritna’ is a work inspired by the love and loss of her father’s land which was in her family for many generations.

Plotting Table, is a table-top with hundreds of holes drilled through and illuminated by green fluorescent light from beneath, which reveal very well Hatoum’s earlier interests in nationalist troopes and reflections on boundaries and identities.

In this work, Boutrous tries to document his interpretation of the world by jotting down all his thoughts and reflections that remind him of his home city, Damascus. From the names of its streets, neighborhoods, markets and archeological artifacts to simple private places like restaurants, coffee shops and gardens that have surrounded him as he has grown up. In addition to these larger headlines, he has written down names of famous men in Damascus such as authors, thinkers, fine artists, politicians, including Kerd Ali, Zakariya Tamer, Karkoutly, Kaliea, Yusuf Al-Adama. The work represents some sort of nostalgia to the city he fears to lose through oblivion; a memory on canvas. 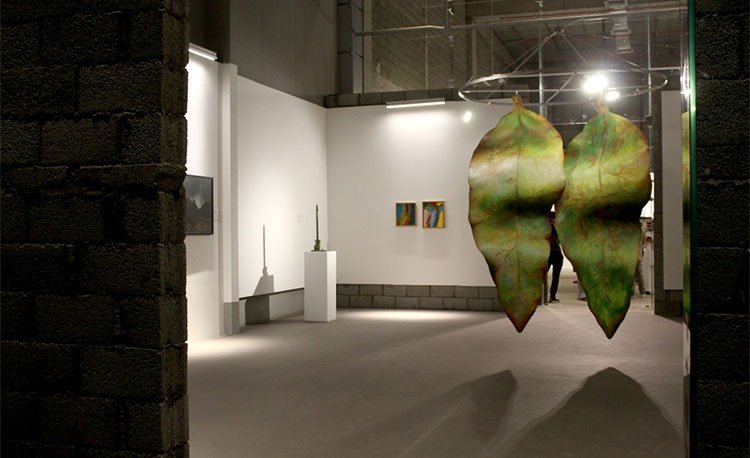 The leaf is a metaphor here as it changes from its confined environment with one spark of imagination, expanding into a wider horizon. The tree leaf falls for two reasons, either because its virtual life has expired or because someone has deliberately plucked it off. We are all like leaves born to live a certain amount of time where we acquire our individuality from creation.

Saudi artist Rashed AlShashai utilizes found objects and appropriated imagery as a conceptual means of identifying the signs of the everyday, creating what he describes as a ‘semantic field’ through which philosophical questions, primarily the purpose of human existence and the functions of society, can be explored.

“B” is the initial letter par excellence, because it opens the basmala (In the name of God, Most Gracious, Most Merciful), the formula with which all the Suras of the Qur’an.

ANOTHER PLANET by Mohammed Abdel Rassoul

The artist created another planet that has it’s own life and creatures, that are related to it , using a preserved memory from the features of the Earth and it’s soil.

THE OTHER by Zaman Jassim

This idea is based on the satellite dish. I was at a large building one day when I saw this large collection of satellite dishes. I realized how much we differ in our gathering of information and knowledge. These dishes remind us of how we grew up and alert us to the effects of education and data that we first absorb at home, and then from the society we live in. Every home and environment are regarded as incubators where ideologies are fed. They soon become a way of life with convictions that differ from the others. 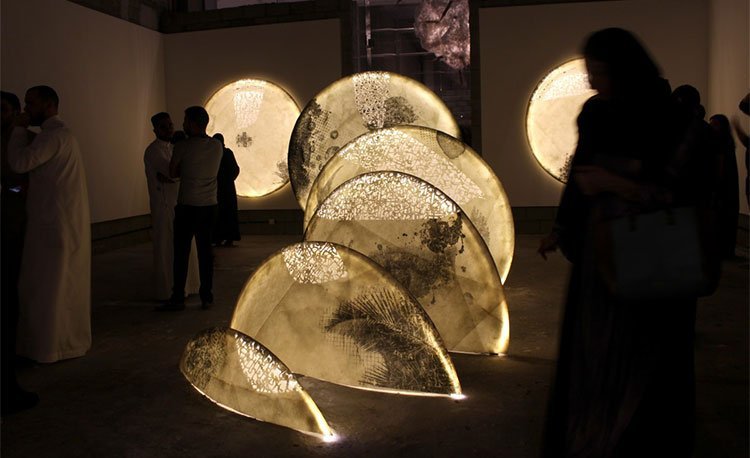 These and many other art works are waiting to be appreciated at Gold Moor: 21, 39 Exhibition Space.