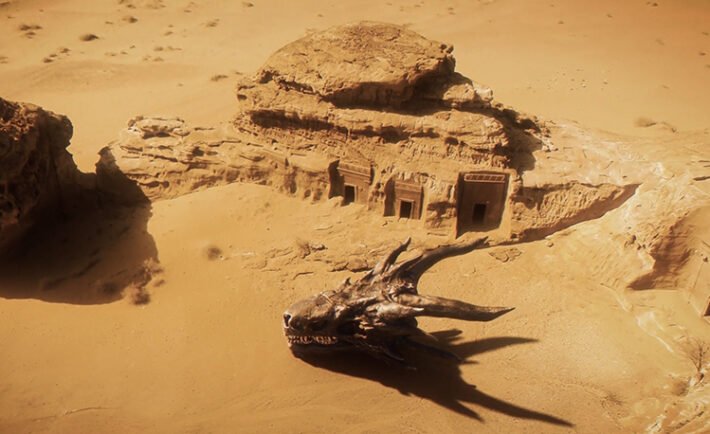 Ahead of the global premiere of HBO’s house of the Dragon.

Fire-breathing dragons have been spotted squatting in the 2000-year-old Nabataean tombs of Hegra, a UNESCO World Heritage Site in AlUla, Saudi Arabia.

The highly anticipated epic fantasy drama, ‘House of the Dragon’, the prequel to HBO’s global phenomena series Game of Thrones, headed to the spectacular landscapes of AlUla as part of a promotional campaign to launch the series which airs today worldwide and in the region on OSN+.

The clip – released on social media – was shot on location at the archaeological and using CGI introduces Daemon Targaryen’s dragon, Vhagar, spreading carnage with his flames and formidable size.

The celebrations continued with the House of the Dragon’s sigil emblazoned on AlUla’s iconic natural rock formation Elephant Rock, and a gigantic Balerion dragon skull seen in the Diwan at Jabal Ithlib, one of Hegra’s most fascinating sites, and within the stunning landscape of Wadi Al Fann.

The striking activations will continue throughout the series with more dragon action to be seen around AlUla’s natural and man-made monuments. The OSN+ activations were created by producer and director Tom Jauncey of creative content studio Beautiful Destinations to strike a chord with diehard fans while tempting the uninitiated to check out the show ahead of the thrilling journey in ‘House of The Dragon’, a series set to dominate the TV landscape.

Based on George R.R. Martin’s “Fire & Blood,” the series, which is set 200 years before the events of Game of Thrones, tells the story of House Targaryen.

“With its historical and archaeological significance in the region, as well as its striking rock formations set across the Saudi Arabian desert, AlUla was undoubtedly an ideal location for OSN+ to activate one of the biggest television premiers, House of the Dragon, the prequel to HBO’s Game of Thrones, both globally and in the region,” said Ashley Rite, VP of Marketing & Growth at OSN+. “We are pleased to have collaborated with the Royal Commission for AlUla on such an immersive activation and experiential campaign.”

Phillip Jones, Chief Destination Management and Marketing Officer, at the Royal Commission for AlUla (RCU) explained: “With the otherworldly landscapes of AlUla and ancient sites built by civilizations stretching back 7000 years, AlUla is the perfect location to stand is as the home of the dragons. With so much history and as the crossroad of civilizations, AlUla has its own myths and legends and stories to tell and we are very happy to lend our destination to the HBO and OSN teams and be part of the Game of Thrones phenomenon.”

Saudi Arabia offers a 40% cash back rebate for international and local feature films, television series, and documentaries planning to shoot in the Kingdom. Film AlUla, The Royal Commission for AlUla’s film agency, established to promote and support international film and TV production in the County of AlUla, supported the activations with location scouting and permitting.