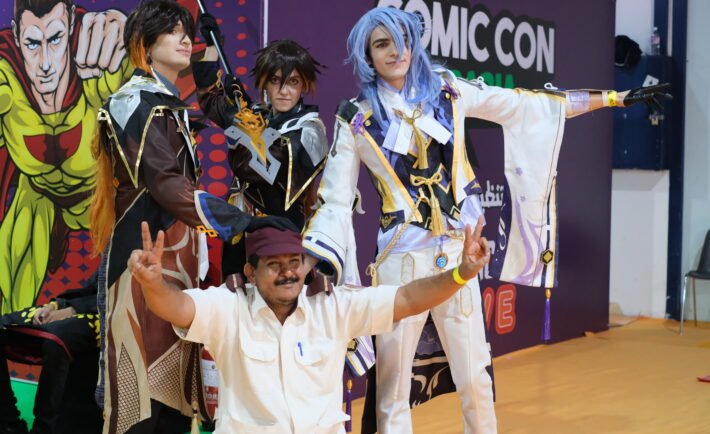 Posing with the attendees

This year’s Comic Con came with a lot of anticipation and excitement from the fans all over Saudi with many traveling from different areas of the Kingdom to attend this year’s 3 day event. 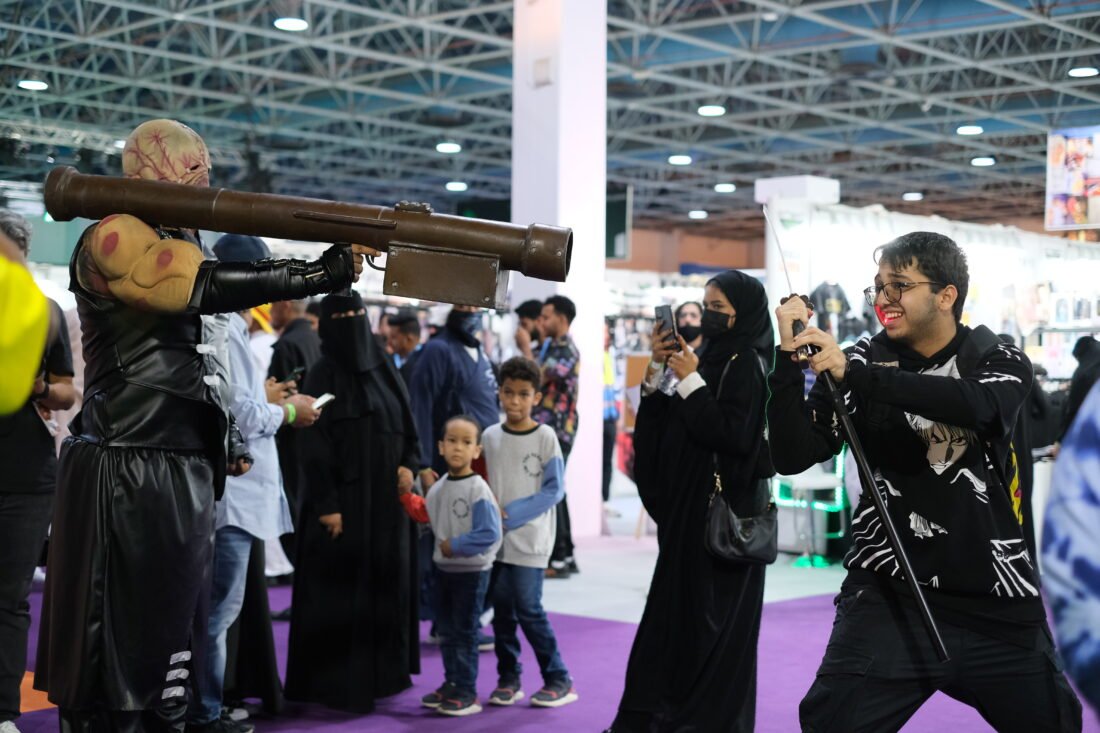 The doors opened at 2 PM on Thursday October 20th where people rushed to go in as early as possible to explore the different areas of the venue before it got packed. By 5 PM, the venue was filled. It was divided into sections with each having a different purpose. Vikings starts in the panel discussion

The fan Zone was the place where the main activities were happening. It is where the guest celebrities were invited to have a panel discussion where the fans had the chance to ask them questions and get to know them better. On the first day, the stage welcomed Luka Peroš aka. Marseille from Money Heist, and Georgia Hirst aka. Torvi from the show Vikings where they both were asked questions about their characters from the Bahraini host Baraa Abdullah and the crowd. On the second day, the stage welcomed Itziar Ituño aka. Rachel Murillo and Lisboa from Money Heist, and Alexander Ludwig aka. Bjorn Ironside from the show Vikings which was met with strong enthusiasm from the crowd and answered the questions of many curious fans. After the panel, the celebrities gave the chance to fans to meet them in a one-on-one meet and greet where they could ask them more personalized questions and take pictures with them and get personalized autographs. Next to the panel stage stood the main stage where multiple performances occurred from a Samurai show, to a stand up comedy show, and finally on the last day, a costume contest with a chance to win SR 3,000 for the winning costume. A little bit to the right of the main stage was dedicated for the many international guests such as voice actors Bysron Baugus and Lisle Wilkerson, cosplay artists Taryn, Har_Fie, Sakuraflor, and more. They were all greeted with love by hardcore fans that waited in lines to get an autograph. The artist alley saw an abundance of merchandise, from anime figures, to board games, and themed clothes and gadgets. It gave an opportunity for collectors to showcase their collections, as well as selling them to younger collectors. The artist alley also showcased a wall filled with all the submitted fan art by local artists along with their instagrams for people to follow their favorite artists. Right next to it stood the gaming section with some arcade games and a spin the wheel with many prizes to win. Moreover, still in the gaming section, there was a console and PC gaming competition with money prizes reaching SR 2,000. And finally, an Indomi booth with a few games for guests to enjoy and win different prizes. From an entertainment point of view, there was plenty to enjoy throughout the three days. Inside the venue, a booth by Makan Pro was bustling with live music from their musicians where guests were enjoying their favorite songs played live such as some Spacetoon theme songs that got everyone going wild. Outside saw a stage that welcomed different artists such as Saudi rock band Ana N7n with three performances scattered throughout the three days, Saudi Metal band Immortal Pain lit up the stage on the second day followed by DJ Rabana. There was also a food section near the stage sponsored by Hunger Station with many food trucks serving the best dishes.

Overall, this year’s Comic Con saw a huge attendance with many famous celebrities that had a huge following within the Saudi youth. It was a very entertaining three days that saw some of the most creative costumes and highlighted the creativity of locals with their character choices and the embodiment of such characters. Can’t wait to see what next year’s Comic Con will have in store.