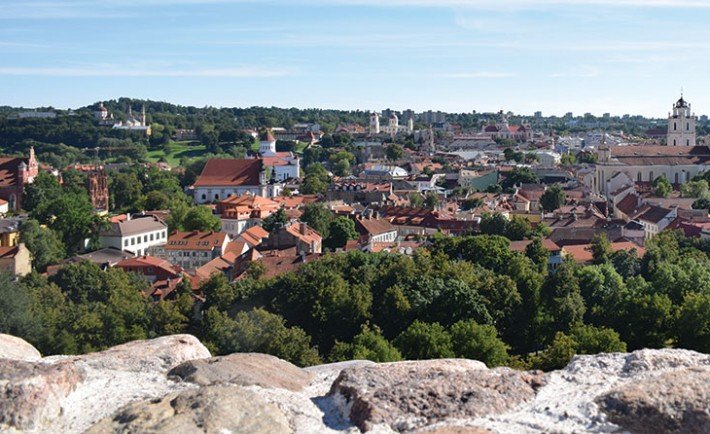 Sitting on mainland Europe’s northeastern tip, virtually kissing Scandinavia, the Baltic states of Lithuania, Latvia and Estonia don’t exactly spring to mind when you think of a motorhome holiday destination. But with guaranteed summer sun, gorgeous campsites, stunning coastal drives and none of the crowds of western Europe, travel writer Tharik Hussain says the Baltic is the ideal motorhome destination.

In this ultimate guide, Tharik shares his findings having spent two glorious weeks with his family in a 5-berth ‘camper’ (as they are known here) exploring one of Europe’s least visited regions. And that’s not all, as the foremost European Muslim heritage travel expert, Tharik will also be writing a special on the Baltic’s amazing Islamic history next month, which is not to be missed.

From child-friendly itineraries in the cities to shallow waters on the beaches, there is something for children almost everywhere you go in the Baltic. Plus most campsites we rocked up in had great play facilities to keep the little ones busy and rarely did we pay an entrance fee for children at tourist sites.

Campsites are everywhere, and often in delightful settings. We camped by the sea, on lakes, in the woods and even by a river. Stick to the ones with a caravan sign, as this guarantees electric hook-ups and water. Most sites however are a bit behind when it comes to things like waste tank drainage and chemical toilet disposal. Our top three were: Camp Inn on a lake beach on the outskirts of Kaunas in Lithuania, Vinrozes on the bank of Lake Durbe in Latvia, and Kivi Talu in wooded Juri, just outside Tallinn in Estonia.

Stick to large chain supermarkets to keep costs down. You can buy everything you need in the really large Maxima supermarkets, but for value, head to the smaller Iki stores. All of these serve fresh fruit and veg and the larger stores also have meat, fish and deli counters.

Although strictly speaking ‘rough’ camper vanning is not permissible, the rules seem pretty relaxed outside of the main cities. So if you pull up for a night or two beside a remote, deserted beach, you’ll probably be alright.

Barring Lithuania, where the capital is in the south east, most of the major cities overlook the Baltic Sea, so the best itinerary sticks closely to the west coast. Our round trip starting and ending in Vilnius, headed for the sea and over to the UNESCO World Heritage site, the Curonian Spit before remaining more or less on the coast up into Latvia and then Estonia. On our return leg, we came back through the middle but avoided the horrific roads in eastern Latvia.

Driving a camper into a busy urban area is not a good idea, with unique traffic systems and trams to contend with. Fortunately, all three capitals have ‘city’ campsites or ones near enough to access the centers easily by public transport.

Stick to the summer months; not only are the Baltic states guaranteed sunshine during this period, but the days are nice and long. This is a blessing as it means you won’t all be cooped up inside your camper all the time. Though insect repellant is a must!

Roads are excellent in Estonia, good in Lithuania and awful in Latvia away from the cities. On the plus side, the Baltic is more or less flat throughout and so you will never find yourself crawling up any steep hillsides with your camper. Major roads are only one or two lanes and in much of Lithuania they have annoying depressions from overuse, which make controlling a camper at speed a tad tricky. As well as a ‘back-up’ paper map, it is wise to have a satellite-navigation unit.

All international driving licenses bearing photos are accepted and all three Baltic states are part of the Green Card System, which means no extra insurance is required to cross borders.

At first glance the Baltic seems a strange place for Muslims, but as our special feature next month will show, the region has a fascinating Islamic history that goes back several centuries. Today though, Muslims are very much a minority with most of those that attend the mosques either converts or migrants. There is a mosque in each capital, but all three are in obscure, converted buildings in outer regions. Halal food is virtually non existent, barring exclusive spots in places like Kaunas, which also has the region’s only functioning purpose built mosque. Men and women dressing conservatively will stand out, especially in headscarves and burkas, as these are highly unusual here. However, barring the odd stare, you will not be bothered.

Useful Tips
All three nations speak their own language. English is spoken widely in the main cities and German and Russian is understood in many rural areas. The tourist office in Vilnius is extremely helpful in sourcing campervans locally and offering practical advice, as too the tourism office in Tallinn. For those who wish to meet the Baltic Muslim community, the organization Islamas Visiems is amazing and full of friendly, enthusiastic people.

GET THERE
The best airline are Turkish and Lufthansa which fly from Jeddah to Vilnius with one stopover in their respective capitals starting from approx SR 4,000.
MUST HAVE
A Schengen visa is required for Saudi nationals.
A good travel guide and phrasebook.
A Satellite Navigation unit.
A back up paper map of the Baltic states.
MUST DO
Stay in a magical wooded campsite.
Spend a night on the Curonian Spit.
Find a hidden beach along the Latvian coast.
Wander the old town of Tallinn.