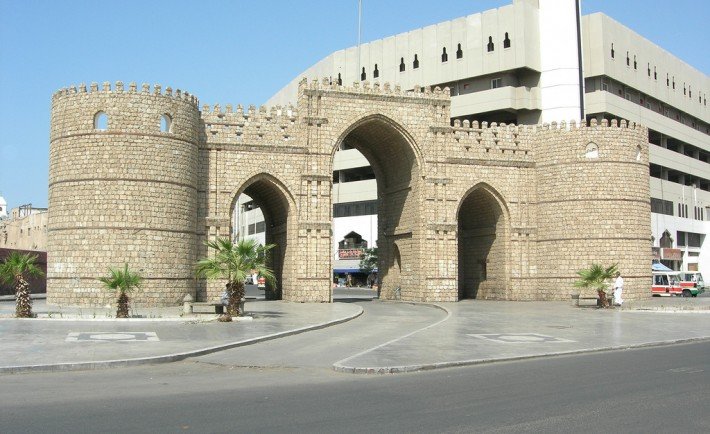 A city that is ever-evolving, Jeddah has come a long way – what was once a fishing village has become a bustling metropolis. from its humble beginnings as a fishing village to a fort and now a bustling metropolis holding on to its old traditions while keeping up with the rest of the world. However this hasn’t diminished the old traditions and the place they hold in Jeddah. Souks, the traditional marketplaces of the Middle-East, have long added to the city’s character and charm. dot Jeddah’s busy shopping districts adding to the city’s character and charm. As the sun sets, the open-air markets come alive in a buzz of activity. One such market has the distinction of being the one of the oldest in Jeddah and can be found in the historical area of Baab Makkah, otherwise known as Makkah Gate.

The boundary wall made of limestone coral that was part of Baab Makkah may have disappeared, but the magnificent gate remains standing with a hint of reconstruction as a source of particular source to tourists.   The gate is adjacent to a street that at night, is transformed into an open-air market for the whole of its approximately 230 meter length. As the sun sets, simple stalls and carts are set up alongside regular shops and the first of the customers begin to arrive. Rickety wooden carts and simple stalls spring up alongside regular shops as people begin to arrive for a round of evening shopping after work.

During Ramadan, shops are open from sundown to early morning and the souk is teeming with thousands of shoppers as well as worshippers going for taraweeh prayers. The influx of peole results in street food vendors and beggars coming out in full force. The market atmosphere at Baab Makkah also never ceases to amuse; the occasional vehicle expertly maneuvering to avoid carts and people; lamb skulls neatly lined on a table top next to a rice cooker; vendors gladly striking a pose or shying away from a tourist’s camera; and kids toying with a football amidst the crowd.

In the end it is the honest and hardworking vendors that are a boon to the night market at Bab Makkah. The amiability shared by vendors and other inhabitants is a counterbalance to the chaotic bustle of the street – making an outing to this historical marketplace different everytime.