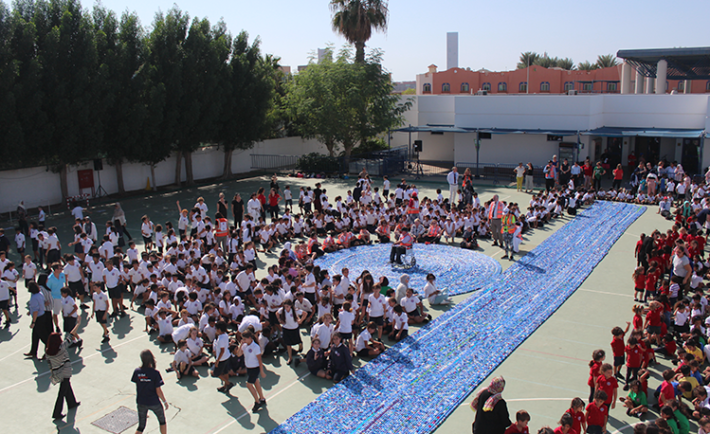 The British International School of Jeddah Primary section have attempted to break a Guinness World Record. They prepared thousands of bottle caps and thread them together to make the longest chain of bottle caps.

The previous record was 260,866 held in the Netherlands and they  managed to string together 322,588! Now they await confirmation from Guinness World Records. The reason the school wanted to try and break this record started from their show last year, which was all about raising the community awareness of the problem of plastic pollution, especially in our oceans. The school collected plastic bottle caps from used bottles and decided in combination with collecting these to buy specialist equipment for less fortunate children, they would try and get a record as well.

To pull this record attempt together took a long time and every child in the Primary Section took part both on the day by helping to lay them out and prior to the attempt by spending their break times and time at home punching holes in the tops , threading them together, counting them and tagging them.

Mr Pat Walker was the brains behind the preparation and he approached this massive task in an extremely methodical and scientific way, working out the best ways to put holes in the caps, measure out the fishing line to string them together and so on. Mrs Sonja Sutcliffe drove the project from start to finish and had the whole Primary Section working together for what was a truly spectacular end result.

All the caps have now been donated to a plastic recycling company who will convert them into currency for the school to purchase wheelchairs and other equipment for children who are far less fortunate than the children at BISJ.

An amazing achievement of team work, vision and resilience! I wonder what they will do next???