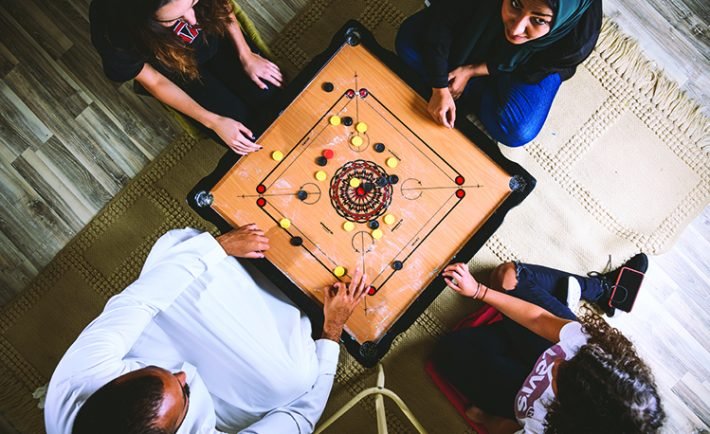 Sure, games are a quick way to pass the time, but they can play a much bigger role. Hijazi culture, which is a unique mix of diverse traditions, shows us exactly that. When they decided to migrate, our ancestors brought with them many things – spices, fabrics, tools, habits, and yes, even games. Carrom is one of those games, with its roots traced back all the way to South Asia.

As a board game, Carrom is portable and family-friendly. Players position their strikers in a set field and flick to score their small puck-shaped pieces into any of the four corner pockets. Those pieces come in white and black, placed in a symmetric cluster at the center of the board. A special red piece – the Queen – is positioned in the middle. Rules vary according to the players and the region, but generally, to win, players take turns striking until one team pockets all of their respective colored pieces, with the Queen no longer on the board.

Carrom is far from being a simple, passive game. Pocketing the Queen and “covering” by immediately trying to score any of the team’s remaining colored pieces can quickly incite a heated argument. It’s all about precision and skill, and it can be very competitive; players are even calling for Olympic recognition. Tournaments are hosted globally, open for amateurs and professionals alike, the last one being the 2018 Carrom World Cup held in Chuncheon, South Korea. 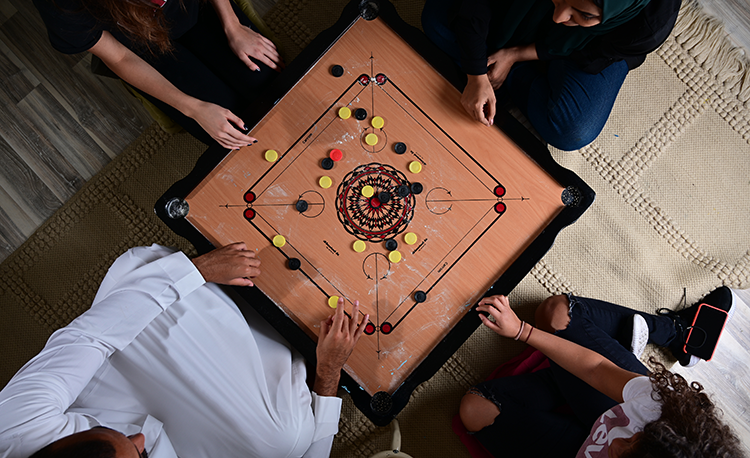 And yet, to its players, Carrom is more than just a competition. Playing Carrom is (and has always been) about building a community, especially during Ramadan, when families would stay up late into the night, talking and playing with each other until suhoor. The kids would get together to orchestrate lively matches, involving the whole neighborhood. They would side with their siblings against their cousins, with their families against their neighbors and, sometimes, even with their next-door neighbors against the whole block.

Carrom was fun. Carrom was loud. Carrom was communal. These tournaments were a way to forge strong relationships. And the stories told to future generations, of nights spent with the sound of the striker hitting wood, the sound of laughter in the air, the feeling of triumph and rivalry – these are the memories that make our culture unique. Personal. Ours. These experiences are what later shape us, moments we ultimately seek to recreate.

Carrom proves to be a popular game played by many throughout generations, perfect for appreciative grandparents and skeptic teenagers. Not only is it fun and addictive, it acts as a strong symbol of cultural heritage, one that helps us connect with, reimagine, and reenact our own rich history.

You need a minimum of two players to play the game. The bigger the group, the more teamwork required. And by working together, we are able to become stronger.

Carrom ultimately teaches us a lesson: community is key. Play together, win together, lose together. The vibrant suburbs that still play Carrom are, to this day, known for their solidarity. Games aren’t about winning, but about understanding (both “enemies” and allies). The overwhelming presence of numbers made physical: a crowd watching, teammates cheering, opponents goading – this is what makes Carrom real, a traditional game that settled with the settlers and spread throughout the region.