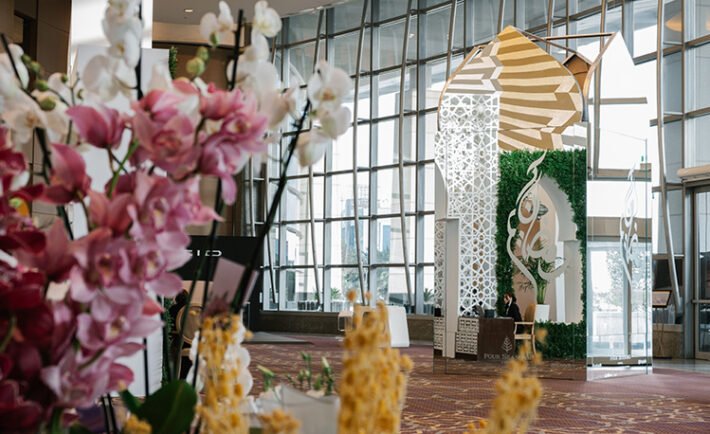 This year, guests at Four Seasons Hotel Riyadh can experience a blend of traditional and mouth- watering cuisine with local and international gourmet delicacies in a sumptuous setting.

Four Seasons Hotel Riyadh at Kingdom Centre has announced the return of its legendary Ramadan Tent at Kingdom Ballroom, providing guests with the finest Iftar experience in the city during the Holy Month.

The Kingdom Ballroom tent will welcome guests in a luxurious décor exuding Arabian elegance. The tent showcases white and gold accents along with tradition inspired ornaments for a truly opulent experience which complements the culinary delights.

The hotel’s culinary team will provide guests with authentic local flavours including a menu with more than 100 recipes presented in seven different culinary islands. Traditional delights will include authentic Saudi ouzzi, chicken kabsa, jareesh, Lamb qursan, succulent grills from a Josper charcoal oven, Asian specialities including poke sushi cups, sourdough pizza from a pizza stone oven among others, as well as desserts such as Kunafa, gelato and a chocolate fountain. 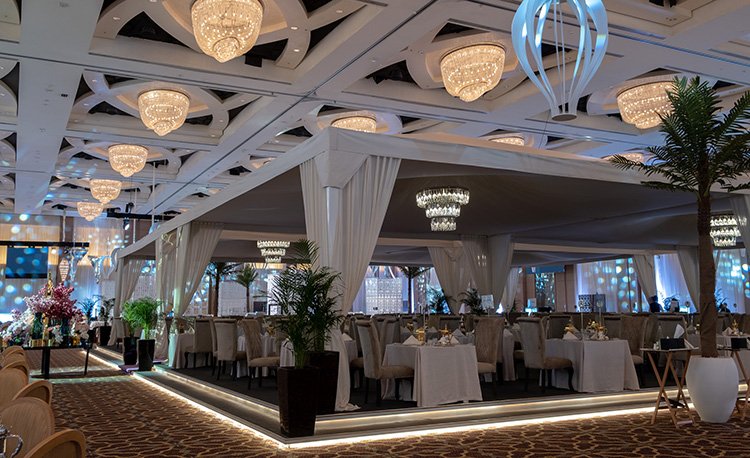 “This year, guests will enjoy exceptional culinary creations with our rich buffet including live cooking, showcasing the diverse talents of our chefs and featuring an extensive range of Saudi and international dishes,” said Stefano Andreoli, Executive Chef at Four Seasons Hotel Riyadh. “Every dish has been created to surprise and delight our guests.

Guests can also enjoy an exclusive Iftar feast with a ‘Chef’s Table’ featuring bespoke table décor, personalized butler service, Chef’s Recommendation dish served to your table and so much more. 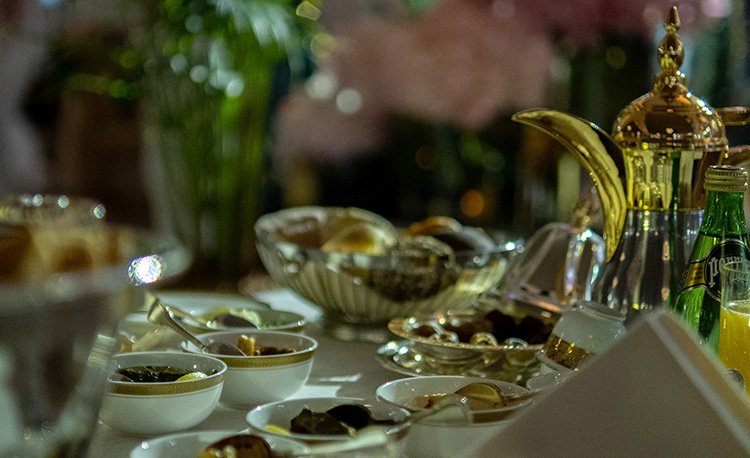 Another of Four Seasons Hotel Riyadh’s unforgettable traditional Ramadan offerings is a choice of Iftar or Suhour held in the unique and relaxing atmosphere of Elements. The restaurant will feature traditional Saudi fare, live cooking, fresh juices corner and an array of classic Ramadan treats.

For a perfect escape in the city, the hotel’s special Ramadan room’s package offers families a relaxing retreat in newly renovated rooms and suites and is inclusive of Iftar at the Ramadan Tent or Elements, 15% off on food & beverage, 25% off on spa treatments, free valet parking and complimentary premium WIFI. 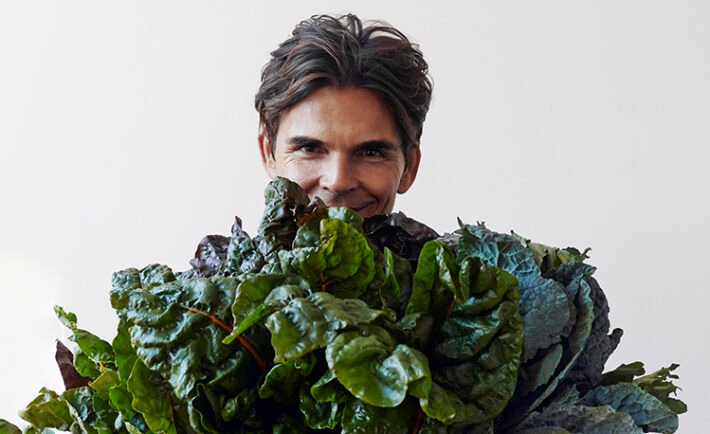 It will soon be Riyadh Season in the capital of Saudi Arabia, and Four Seasons Hotel Riyadh at Kingdom Centre will be right in the thick of programming as the official hospitality provider of the acclaimed festival, and on the menu with two international culinary experiences to enjoy at Al Murabaa Fine Dining Area.

Serving innovation on the plate, Four Seasons will present offerings to tempt lifelong “sweet-tooths” and contemporary “foodies” alike. They include seasonal desserts from renowned French Pastry Chef Pierre Hermé, who has been tagged as a “pastry provocateur” by Food & Wine magazine, and plant-based creations from celebrated Chef Matthew Kenney, a successful restaurateur and recognized leader in plant-based cuisine, who will employ local Saudi ingredients to create multi-course dining experiences.

Taken together, Four Seasons will be a hot ticket among more than 200 restaurants and 70 cafes set to contribute culinary offerings throughout the two-month entertainment and cultural festival. Both Four Seasons culinary experiences will be available daily from 6 pm-2 am from October 24 to December 8, 2021, at Al Murabaa Fine Dining Area.

Make Room for Macarons and More 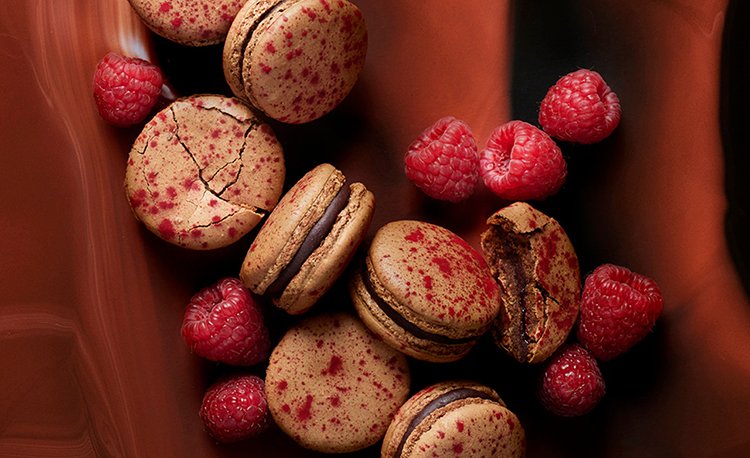 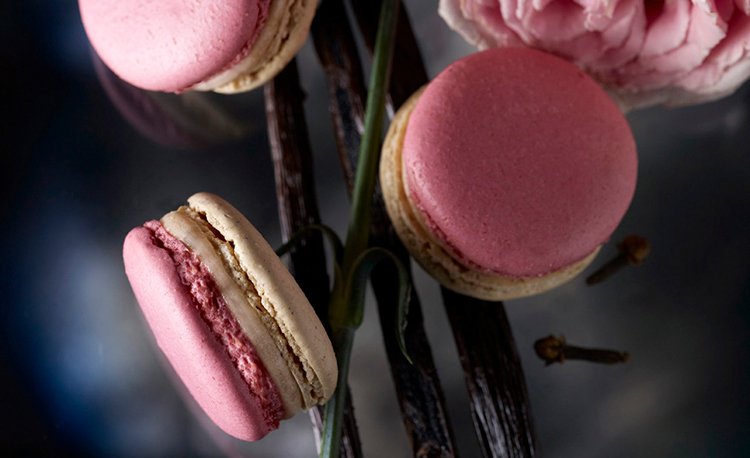 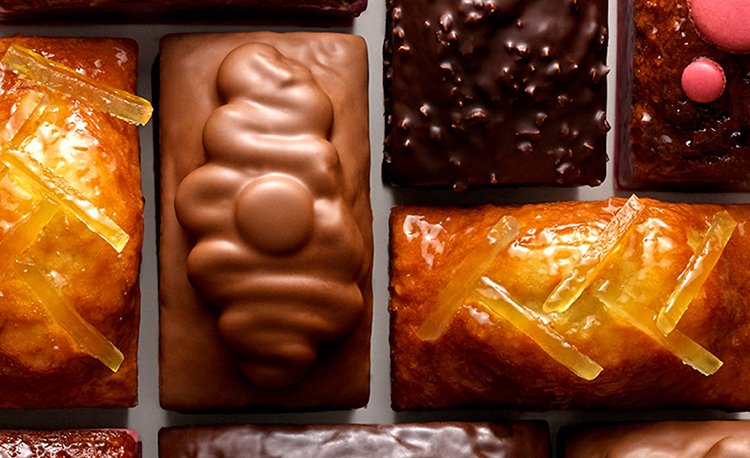 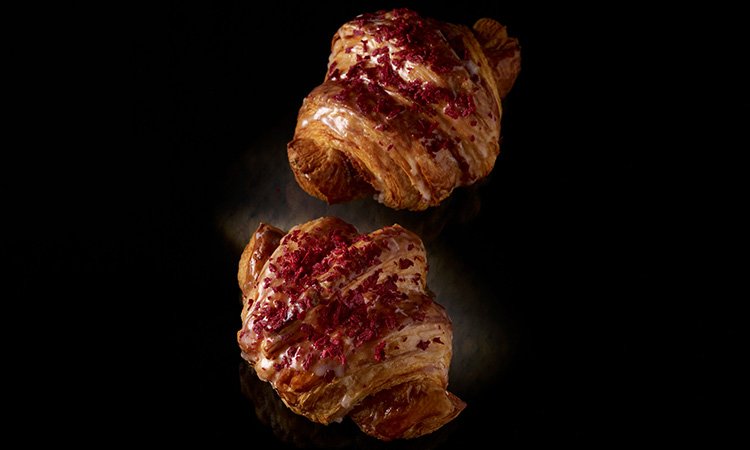 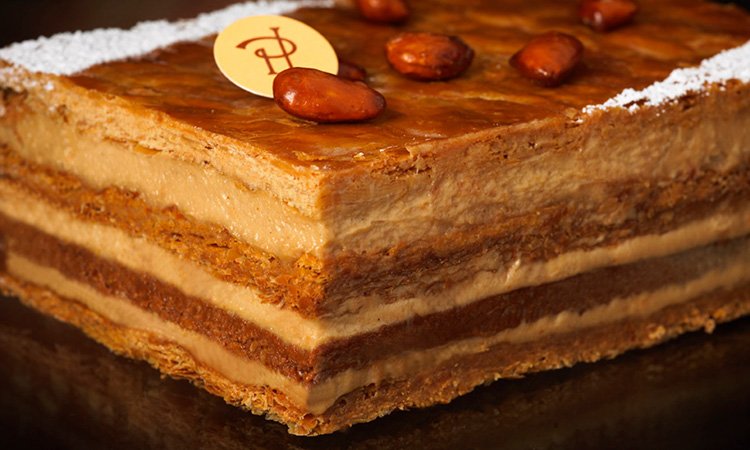 Lovers of sweet treats and artistic presentations will find much to enjoy from Chef Pierre Hermé during Riyadh Season. A descendant of four generations of French bakers and pastry chefs, Hermé draws inspiration from his personal weakness for “sweets, pleasure, sensations, encounters, fragrances and textures,” which he shapes into pastries, madeleines, pound cakes, chocolates, ice cream & sorbets, confections, and macarons in a wide array of flavors and hues, from the blushing pink “Ispahan” with sweet rose cream, litchi, and fresh raspberry, to the tawny “Mogador” with milk chocolate ganache and passion fruit purée – to name just two of many.

Nicknamed the “Picasso of Pastry” by Vogue, and hailed as the World’s Best Pastry Chef by the World’s 50 Best Restaurants Academy in 2016, Chef Hermé’s collaboration with Four Seasons will see a wide selection of dessert items available for festival-goers to enjoy. 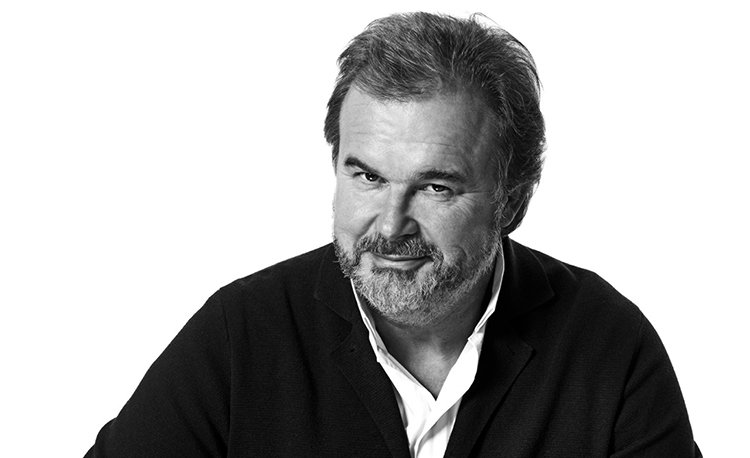 The Future of Food on the Menu 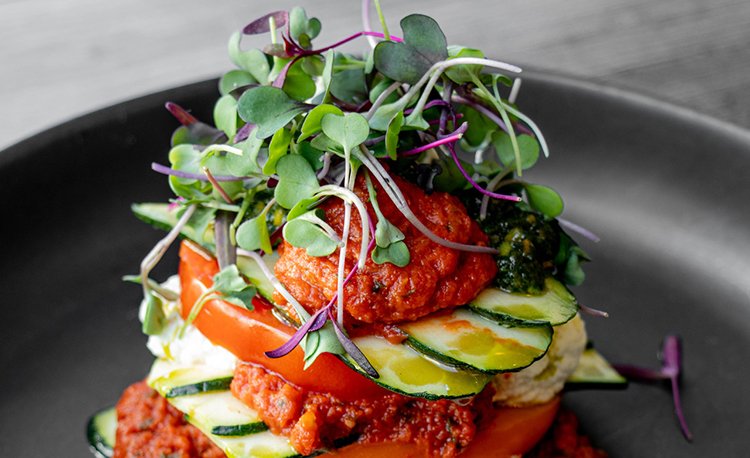 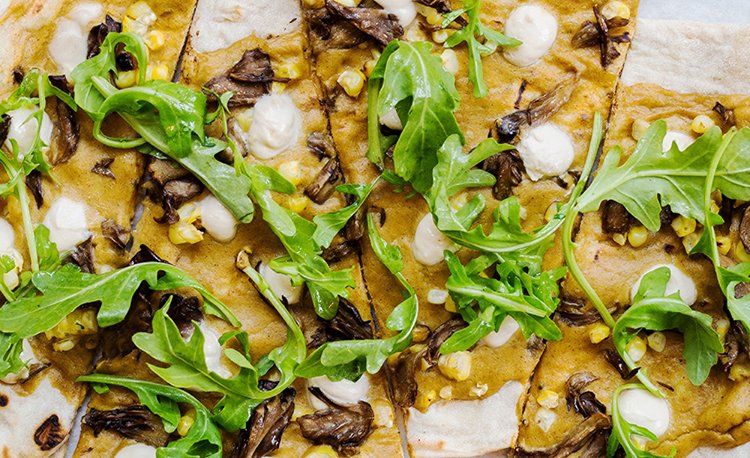 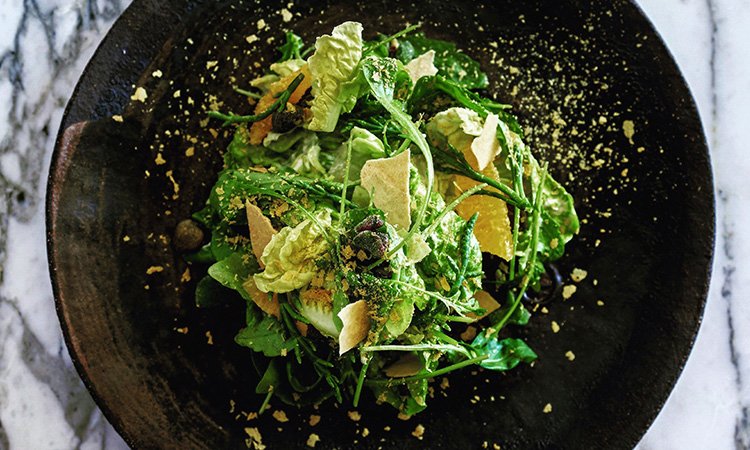 An avid outdoorsman originally raised along the Atlantic coast of Maine in the northeast United States, Chef Matthew Kenney’s keen understanding of seasonal and local ingredients was sharpened at the French Culinary Institute and polished along with his culinary skills in the kitchens of upscale restaurants in New York City. Then he began opening his own and kept at it, with myriad operations across the U.S. and around the world, including “Folia by Matthew Kenney,” a seasonal plant-based dining experience created in collaboration with HRH Prince Khaled bin Alwaleed bin Talal Al Saud’s KBW Ventures. “Folia”, Latin for “from the leaves”, is already available at various Four Seasons properties in the GCC and in the United States.

Building on their joint successes with Folia, now rolled out across five of the Hotel company’s premier properties, Prince Khaled and Chef Matthew have embarked on their latest innovation: the launch of Folia for Riyadh Season. Embracing the concept that “the future of food is plant-based,” Kenney reimagines the way guests experience food and elevates healthy dining in settings of contemporary design and architecture, the better to improve the way the world eats by bringing plant-based cuisine into the mainstream. 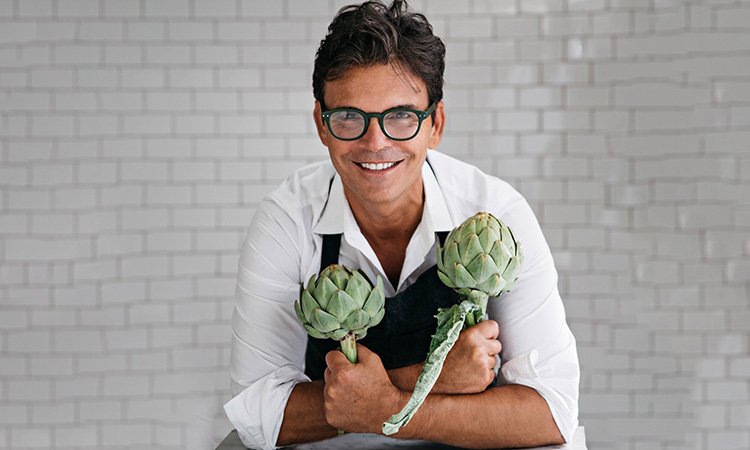 “On a personal level, the launch of Folia for Riyadh Season is truly the biggest moment in our collaboration with Chef Kenney to date. KBW Ventures is proud to present innovative, healthful dishes, curated by a culinary master in my hometown, Riyadh, as part of the Kingdom’s celebration of hospitality and entertainment,” said Prince Khaled, highlighting Four Seasons Riyadh’s commitment to bringing the very best quality in dining experiences to its valued visitors.

“We are proud to be the official hospitality provider at Riyadh Season 2021, and pleased to provide our guests and festival-goers alike with unique culinary experiences from the world-renowned chefs Pierre Hermé and Matthew Kenney,” said Guenter Gebhard, Senior General Manager at Four Seasons Hotel Riyadh at Kingdom Centre. “Riyadh Season is an exciting time in the capital, and playing a prominent role in the food and beverage offerings means a lot to all of us at the Hotel. Our culinary team is looking forward to joining chefs from Pierre Hermé and Matthew Kenney to offer exquisite dishes with the pick of locally sourced ingredients.” 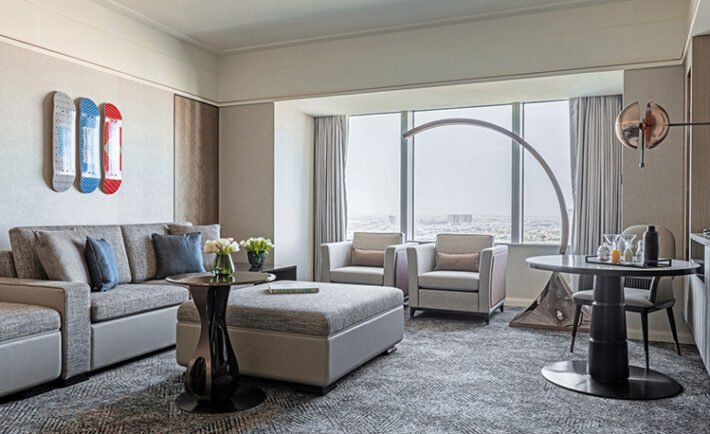 The new look has a strong influence of Saudi heritage as well as custom designs that embrace the culture and provide the utmost luxury for guests.

Four Seasons Hotel Riyadh at Kingdom Centre is set to welcome guests to experience the Hotel’s revamped rooms and suites after an extensive renovation that leaves the Hotel well placed to maintain its leading edge in the Riyadh hospitality landscape. With an enviable location in the heart of the Saudi Arabian capital, Four Seasons Hotel Riyadh remains an architectural icon in Riyadh’s skyline, occupying the 30th to 48th floors of the prestigious Kingdom Centre. 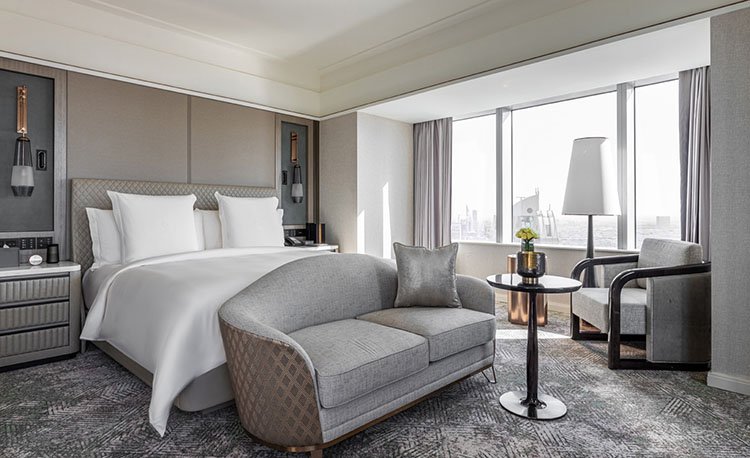 Executed by renowned hospitality design firm Hirsch Bedner Associates (HBA), the newly redesigned guest rooms and suites reveal an entirely new look that immerse guests in the Saudi culture. Inspired by the literal meaning of Riyadh, which translates as “garden,” the sumptuous guest rooms showcase two distinctive colour palettes. Vivid shades of green and turquoise set the tone through the carpets, custom wall coverings and handmade accessories crafted by local artisans. Decorative walls incorporate historic tribal patterns engraved in wood, a recurring motif that is also found in the bespoke closet wall coverings and the sliding window panels that connect the bathroom with the bedroom. Each of the wall panels are accented with stylish tufted and stitched leather upholstery, further adding to the air of luxurious refinement. 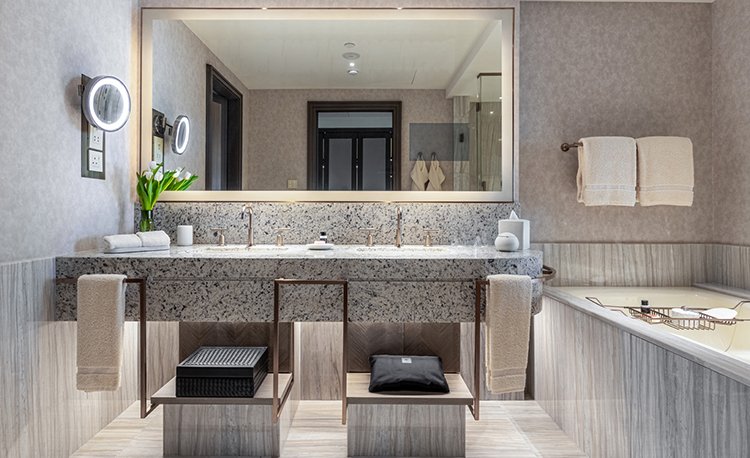 Artwork selected in partnership with philanthropic foundation Alwaleed Philanthropies, chaired by HRH Prince Alwaleed bin Talal, focus on empowering and celebrating local craftsmanship – an uplifting reflection of the spirit of these fresh new rooms. Each room and suite has also been modernised and provides guests with all the comforts of advanced in-room technology such as automated curtains and lighting systems, iPads, smart TVs, Bose Bluetooth speakers and smart makeup mirrors.

“The redesigned spaces embrace the heritage of the city and at the same time, reflect contemporary aesthetics and the design-savvy sensibility of the modern traveller who expects a sensory experience and a place of comfort within the Hotel,” says Guenter Gebhard, General Manager at Four Seasons Hotel Riyadh. “Our new look, combined with our team’s warm hospitality and Lead With Care health and safety program, offers an authentic and safe luxury experience for guests unlike any other in the city.”