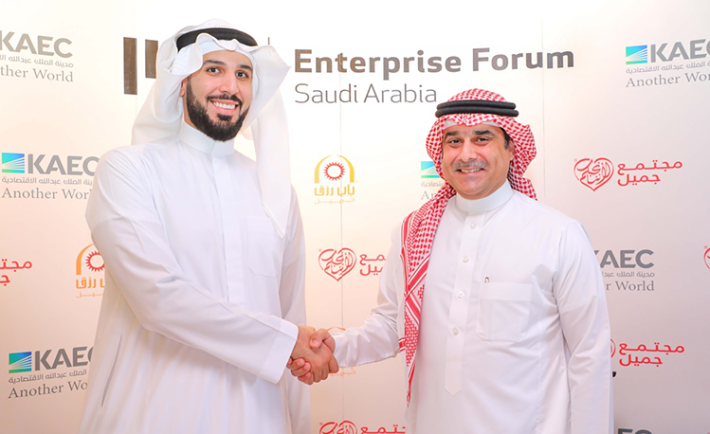 The 45 semi-finalists teams are announced.

MIT Enterprise Forum (MITEF) Saudi Arabia, part of the MIT Enterprise Forum global network and partner of Bab Rizq Jameel, one of Community Jameel’s initiative, announced a new collaboration with King Abdullah Economic City, whereby the City will be the strategic partner for the 4th edition of the MITEF Saudi Startup Competition.

Compared to previous editions, this year’s MITEF Saudi Startup Competition has witnessed remarkable progress in terms of quality of entries. The total number of applicants since the launch of the competition in 2015 reached more than 6000 participants, and 24 winning teams. More than 320 local and Arab business experts and academics have participated in the judging process and the StartSmart conference in which winners are announced.

Speaking on the occasion of the signing of the partnership agreement, Mr. Ahmed bin Ibrahim Linjawi, CEO of King Abdullah Economic City, stated: “This partnership reflects KAEC’s  continuing efforts to promote the road map aimed at creating an attractive and stimulating environment that enables small and medium enterprises to raise their contribution to local production from 20% to 35% by 2030. Within this strategic partnership, we will work with the MIT Forum to strengthen the role of this vital sector in achieving the development goals as envisaged by the Kingdom’s 2030 vision, which emphasized the great role of entrepreneurs as the future economic power”.

Commenting on this, Hussein Mohammed Jameel, Managing Director, Abdul Latif Jameel said: “MITEF Saudi Arabia is proud of this constructive strategic partnership with KAEC, as part of the two sides’ efforts to provide a stimulating environment for business by supporting innovative initiatives and encouraging entrepreneurs in Saudi Arabia.” 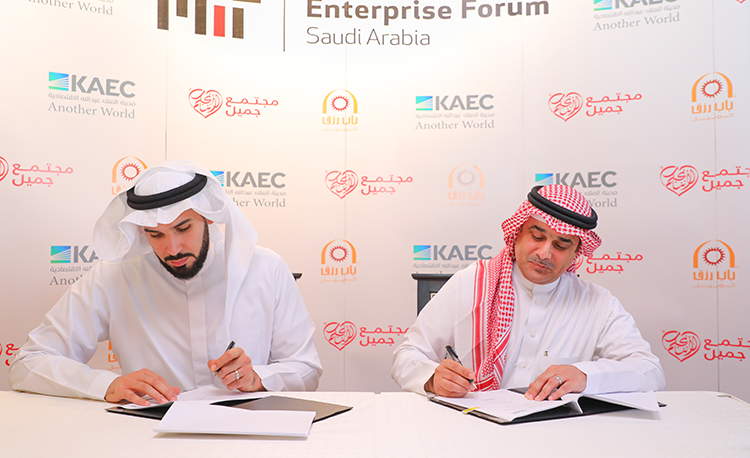 He added: “In collaboration with Bab Rizq Jameel, the annual MITEF Saudi Startup Competition is the first of its kind in Saudi Arabia. MITEF offers an invaluable opportunity to cultivate innovative projects into scalable initiatives, with teams comprised of some of the most talented participants in the region. Supporting entrepreneurs is one of the tenets of Community Jameel’s vision and part of our country’s continuous efforts to motivate young entrepreneurs and their ideas to help build their career paths and achieve excellence. Youth is the key element in enhancing the Saudi start-up environment and promoting the Kingdom’s economic standing worldwide.”

A judging panel of 46 business experts and academics from all over the world assessed more than 560 entries represented by 1,680 entrepreneurs in the light of the competition’s criteria, namely creativity, potential to expand beyond local markets, and making a positive impact on society.

Following the training camp that will be held at King Abdullah University of Science and Technology (KAUST) from March 1-3, 2020, the second round judging will take place on March 4, 2020 to announce the 27 finalist teams. The winners will be named at the StartSmart Conference on March 7, 2020 after holding the third round judging at the same morning in King Abdullah Economic City (KAEC).

As a prerequisite for qualification, applicants must submit an innovative, scalable project capable of making a positive impact on community. The participating teams must be composed of at least two members, one of whom is a Saudi national. The competition is run in three tracks – startups, social enterprise, and ideas. The 15 semi-finalists in each category are:

The MITEF Saudi Startups Competition is proud to attract this year distinguished entrepreneurs in different fields. This year’s competition focuses on investing in startups and small businesses by organizing the Startup Investment Forum from March 5 to 7, 2020 and gathering the elite among the most emerging companies from Saudi Arabia and the Arab world.

It is our ambition for MITEF Startups Competition to be a real incubator for achieving the vision of the Kingdom 2030. 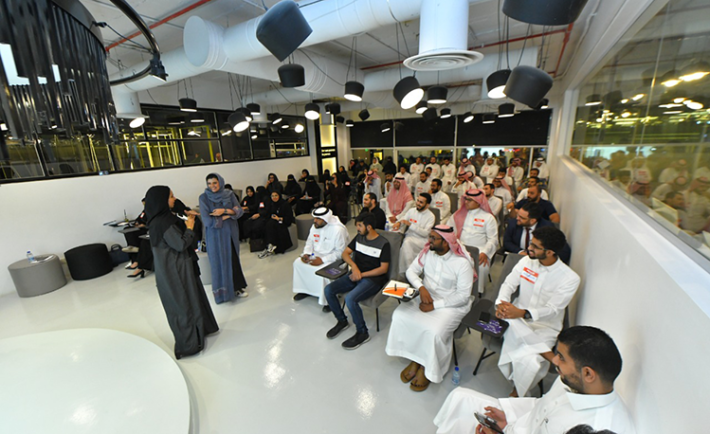 The objective is to create an interactive platform to connect innovative entrepreneurs with top industry experts to coach and help them launch and develop their projects, and to foster the entrepreneurship culture in Saudi Arabia, in partnership with the nonprofit organization Tasamy in order to provide insights and mentorship for Social Enterprise Ventures.

MITEF aims to attract male and female entrepreneurs, university students and everyone interested in entrepreneurship in Saudi Arabia. It encourages them to interact, discuss and introduce programs and competitions that would enrich the entrepreneurship environment in Saudi Arabia. The event has three zones: the dream zone for young entrepreneurs who need mentoring and coaching to translate their ideas into real projects, the Start zone for sharing successful startups stories, and the Inspire zone which focuses on successful startups that aim to effect a substantial positive impact in the society.

“By holding this event, MITEF Saudi Arabia aims to support Saudi youth to develop their ideas into real projects that help drive economic progress, promote the entrepreneurship culture, and inspire innovation across all business sectors within Saudi Arabia in line with the 2030 Vision. We cordially invite and welcome all entrepreneurs and stakeholders to participate in this week-long event at the Riyadh Front Mall and the Riyadh Boulevard to share ideas and discuss potential projects and opportunities. So, don’t miss it!” commented Bayan Abdullah Algamdi, Head of Entrepreneurship Programs and MITEF Saudi.

MITEF, part of MIT Enterprise Forum global network, in collaboration with Bab Rizq Jameel, an initiative of Community Jameel, has announced its fourth annual edition of the Saudi Startup Competition. Registration is open to all Saudi and non-Saudi entrepreneurs from all age-groups and business sectors on the official website of the competition and will continue until December 21, 2019. The nine winning teams will be invited to participate in the 13th edition of MITEF Arab Startup Competition and awarded cash prizes totaling more than SAR 325,000. 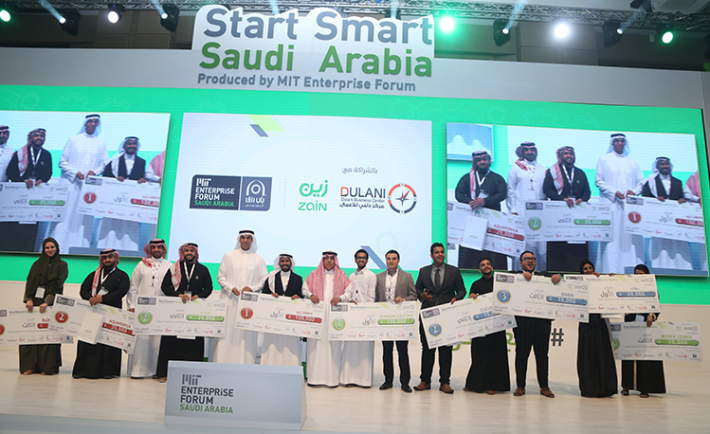 The MIT Enterprise Forum (MITEF) Saudi Arabia, part of MIT Enterprise Forum global network, in collaboration with Bab Rizq Jameel, an initiative of Community Jameel, the global philanthropy, has announced its fourth annual edition of the Saudi Startup Competition dedicated to the promotion of Saudi entrepreneurs and providing a platform to present their projects and ideas and enhance their role in the future innovative business environment.

Registration for the 4th edition of the competition will opened on September 10, 2019 on the official website of the competition, and will continue until December 21, 2019. Applications will be evaluated by a specialised panel of judges from the entrepreneurial community, with the names of the 45 teams qualified to the semi-finals of the MITEF Saudi Startup Competition announced on January 16, 2020.

The competition runs for more than six months, during which e-induction briefs will be organised in selected universities and educational institutes throughout Saudi Arabia starting from September to mid-December 2019. Preparatory activities, orientation sessions and a boot camp under the supervision of specialists and experts in all commercial and social fields will be held throughout the competition for the teams qualified for the semi-finals.

Finalists will have the opportunity to participate in the Saudi StartSmart Forum, a programme of the global network of MIT Enterprise Forum, which will be held before the winners are announced on March 7, 2020 in Jeddah. Saudi StartSmart aims to encourage, motivate, and guide entrepreneurs in terms of ideas creation and commercial and social enterprises through workshops and seminars focused on technology and innovation. In addition to cash prizes totaling more than SAR 325,000, the nine winning teams will be invited to participate in the 13th edition of MITEF Arab Startup Competition.

“We invite all aspiring Saudi entrepreneurs to put their projects forward for the competition, and use the platform to help drive their ideas into reality and scale from small businesses into global companies.”

Registration for the fourth edition of the MITEF Saudi Startup Competition is open to all Saudi and non-Saudi entrepreneurs from all age-groups and business sectors in one of the three tracks: Ideas Track, Startup Track and Social Enterprise Track. For more information on how to participate and judging Criteria for the MITEF Saudi Startup Competition, In addition to the scheduled induction tour, please visit: http://www.mitefsaudi.org/