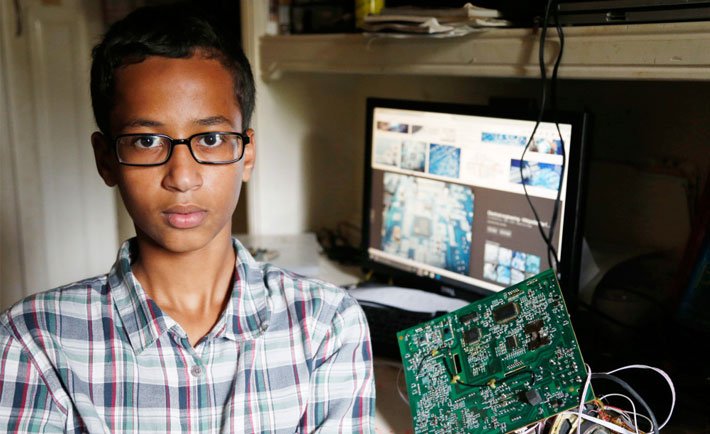 ‘Cause yes, people, we stand by Ahmed Mohamed.

In case you haven’t heard already, Ahmed is the brilliant 14-year old inventor who took a clock he was making to school. Just a regular cool digital clock, no more, no less— all he wanted was to show it to his teachers. Instead though, he got detained and interrogated by the Irving PD in Texas, on suspicion that the clock was some sort of bomb.

After common sense finally prevailed and folks realized that well, the clock was simply a clock, word of what happened to Ahmed spread and the #IstandwithAhmed trended in support of the young aspiring engineer who simply loved robotics and inventing stuff. From US President Obama, Mark Zuckerberg to Pharrell, Ahmed has received an outpour of support.

Here’s a list of some awesome stuff Muslim inventors, innovators and scientists have contributed to mankind… And Ahmed, we hope to see your invention on this list one day!

Coffee and Cafes
While the folklore and legends surrounding the discovery of coffee is still up for debate, but one thing cannot be contested, we have the medieval Islamic civilizations to thank for it.

The first coffee seeds were discovered in Kaffa, Ethiopia in the 11th Century. There is also evidence showing that it was first roasted and brewed in Mocha, Yemen around the 14th-15th century. By the 16th century, it spread across the Arabian Peninsula, mostly because of the Ottoman empire.

First coffee houses? Well Istanbul technically had the first documented café in 1554 but there are traces of such establishments having been put up in Makkah, Medina, Cairo and Damascus. You’re welcome, Starbucks.

Really Cool Clocks
According to 1001inventions.com, a really cool website for history buffs by the way; throughout the middle ages, mechanical and water clocks were constructed by early Muslim civilizations. The most famous of which is the Elephant clock, which uses Greek water-raising technology, an Indian elephant and had a multicultural design to celebrate diversity. It was built by master inventor, Badi’al-Zaman Abū al-‘Izz ibn Ismā’īl ibn al-Razāz al-Jazarī.
Optics
Ibn Al-Haytham, an Arab scientist and physicist is considered to be the father of modern optics. He was the first to accurately describe the anatomy of the human eye as well as give a scientific explanation to how we see.
Surgery
Abu al-Qasim al-Zahrawi is considered to be the father of modern surgery. His encyclopedia on medical practices is the basis for numerous surgical procedures. Not only that, he also invented instruments still present in your surgical tray today.

Nanorobot
Invented by Saudi student Siham Abu Zahira back 2013. The Nanorobot won the top prize for an international invention contest held in Australia. The invention helps to reduce medical errors by 70% during an open brain surgery. It can also be used to diagnose and evaluate the brain and the effect of nerve cells.