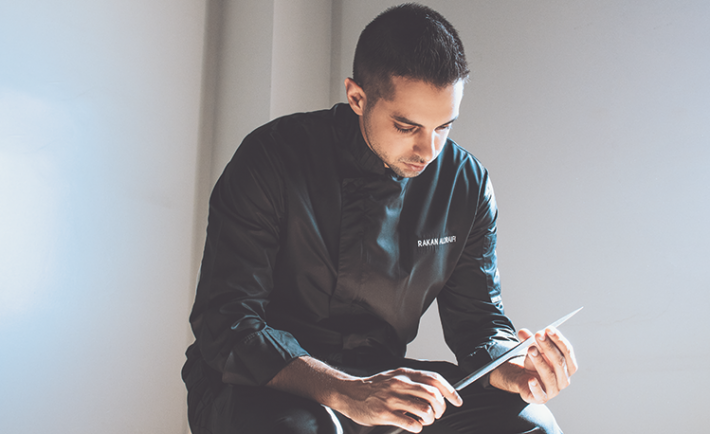 “Sometimes, your passion is ignited when you get thrown into the fire, that’s how I discovered mine —I opened a restaurant straight out of college, and one day, I found myself without a cook, and all I could do was put on an apron and brave the heat of the kitchen.”

From a down on his luck restaurateur to becoming one of the Saudi chefs to prepare a Saudi lunch for over 5,000 guests at DAVOS, World Economic Forum 2018, there is no doubt that Chef Rakan has come a long way.

Long hours, knife cuts, and skating through slippery kitchen floors is what it took for him to be named Best Saudi Chef 2018 by the Saudi Tourism Excellence Awards, and to be nominated in the Middle East Excellence awards this year. And if you asked Chef Rakan, he’s looking forward to more of it: “Passion gets you started, hard work is what moves you forward. Being Saudi is part of who I am but we (as Saudis) are more than the word itself, it is important that we represent our culture, for me I do it through food and how I act as a chef. Be professional, be willing to put in the long hours, keep learning. I am honing my techniques—French, Japanese, Chinese, I come in every kitchen to serve good food but I am also there to become better.”

This year, Chef Rakan starred in two cooking shows, for an Abu Dhabi channel as well as the recently relaunched Saudi Broadcasting Channel (SBC). Prior to these, he also competed in Top Chef Middle East. Chef Rakan is working towards one day becoming an executive chef, and eventually opening a restaurant with him at its helm. He is currently a Senior Chef De Partie at Four Seasons, Riyadh.

“Don’t do it for the money, if you do that you will not make it. Cooking requires passion, being a chef needs dedication. It’s not easy, you will start from the bottom, bruises, cuts, burns– but I can tell you this, it’s worth it.” – Rakan Al ORAIFI