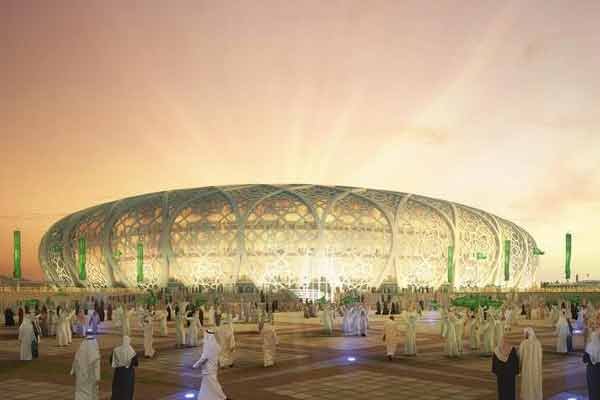 It has already taken its place as an iconic architectural expression on the Jeddah skyline, but it is much more than just a sports venue — it is a pillar of engineering excellence and a launch pad for a paradigm shift in participatory sport among residents of Saudi Arabia.

It’s a source of pride for all Jeddahwis and an achievement admired by the entire country. However, there are a few things about this ‘Jewel’ that you probably didn’t know, read on to know more…

Its bulbous outline and golden colored exterior make it appear like a jewel rising out of the sand. Thus the stadium was nicknamed ‘The Jewel.’

2) Centrepiece of the KASC

This stands as a record for an establishment of this magnitude. Thus, it required over 8000 workers working round the clock to finish it within the timeframe.

Using the latest in large-venue technology from the grass on the pitch to a cutting-edge external design, that promotes energy efficiency; King Abdullah International Stadium is equipollent to its European counterparts.

Running round the stadium are a ribbon of tie-down braces and frames that highlight the mashrabiya screens, which carry elements of traditional Arabian architecture and design.

6) 2nd largest stadium in the country

This makes it one of the most expensive stadiums in the entire Arabian Peninsula.

This may come as a shocker to many, but there is a good reason behind why an athletics track was not included in the stadium. It was purposefully done so to allow spectators to sit closer to the actual pitch.

The diamond-patterned screen mediates the breezes and provides shade, enabling the stadium to be naturally ventilated making it ideal for the hot and humid Jeddah weather.

By day its surface reflects the sun making the natural colors over the façade resemble those of beach sands. By night the stadium glitters and can be seen from large distances with light piercing through the largely perforated cladding.

11) 84,115 spectators attended the inaugural match at the stadium

This made it the most attended football match in Saudi Arabian history.