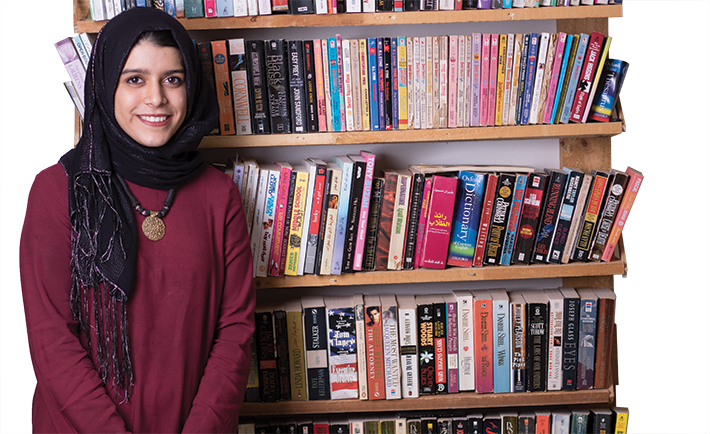 After a few years of attending school in India, Huda Merchant returned to Saudi and discovered that books were limited and student book clubs were non-existent. To fill the literary gap, she eventually formed Jeddah Reads.

With a background in media, along with the help of Dania Al Masri and Fida Al Hassan of Impact with Deeds, Merchant started the project when she was interning at Youth Initiative Group (YIG).

“They asked me what I’m passionate about and what problems I see in the society that can be tackled using media.” She immediately chose reading and conducted surveys in colleges and offices to identify and understand the lack of a proper reading culture.

After graduating, Merchant sat down with Dania Al Masri to develop a clearer approach, but faced challenges.

“It’s difficult to get a team together,” she explains.

“People are quite laidback even though they want to help. As a non-Arab, I find language and culture to be an issue. I want Jeddah Reads to be bilingual because I want it to appeal to everyone, unlike some other book campaigns that only target Arabic speakers.”

Merchant is busy working on several projects including regular literary events, but still finds time to read. Her advice if you want to read more is to always carry a book, and read in the car.

Building School Libraries: Lack of school libraries directly results in children not developing the habit to read. The libraries are designed based on space available and will include bi-weekly or monthly bookish activities. Jeddah Reads is accepting book donations for this purpose.

The Bibliophiles: A book club for 12-13 year olds who tend to find libraries boring. The on-going book club, which meets at the Impacts with Deeds office, has attracted many young readers. The Bibliophiles started with “Finding Audrey” by Sophie Kinsella, which helped them understand anxiety.

#50Readers1Question – Video Series: Each video features one reading related question answered by a handful of readers. The videos offer personal insight and contribute to opening dialogue on reading.

Book Fairies: This is an upcoming collaboration with Emma Watson’s Book Fairies initiative. Jeddah Reads’ book fairies will leave books in Careem cabs, cafes and other public spaces for lucky people to pick up.

Book Club in a Bag: A corporate book club in which Jeddah Reads is going to partner with different companies to encourage employees to read for 15-20 minutes every day.