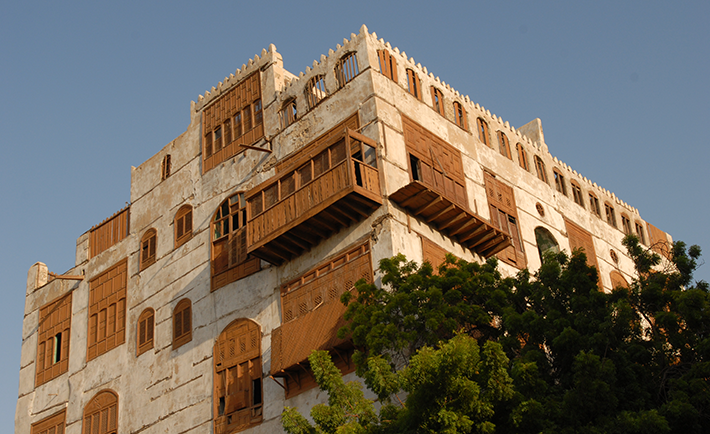 One of Balad’s most magnificent ancient mansions, which has recently been renovated, is Bayt Nassif (Nassif House), now considered a symbol of Jeddah’s rich past. Today, it is a cultural center where you can attend special exhibits or lectures given by knowledgeable people like Mr. Sami Nawar. Going from one room to another one can also learn a lot about what the interior of one of these houses was like in bygone days. Something which I found especially interesting was that they used trained camels to go up and down the five floors of the building carrying goods, especially to the kitchen on the fourth floor. The stairway is, in reality, a ramp with spaced crossbeams, convenient for both man and beast to walk on.

Bayt Nassif has 106 rooms and the art work some of the rooms contain is admirable. Besides works on wood, you can see others on tiles as well as Arabic calligraphy.

There is an interesting anecdote related to how large and complicated this building is: On one occasion, a thief entered the house, not with good intentions, of course, but in the course of his wanderings, he realized that he was completely lost. He spent so much time trying to find his way out that he eventually lost his nerve and when someone finally came across him, he immediately surrendered, begging to be arrested!

People used to recognize Bayt Nassif as “The House with the Tree” because it was the only house in Balad that had one. Obviously, growing a tree was not an easy task because of the scarcity of water. This hardy survivor is a neem tree (Azadirachta indica) and is practically as old as the house.

The construction of Nassif House began in 1872 and it was finished by 1881 for Sheikh Omar Effendi Nassif, then governor of Jeddah. This house belonged to the Nassif family until 1975. One of the heirs, Sheikh Muhammad, turned Bayt Nassif into a private library that eventually accumulated 16,000 books, which could be read by anyone visiting him. Today these books belong to the Abdul Aziz University Library.

Although nowadays one can enjoy all the commodities of modern life, it’s still a very exciting experience to wander through Balad, admiring the houses, both old and renovated, perhaps attracted by the sight of a beautifully carved door or an ornate balcony and eventually discovering that you are lost. But getting lost among streets with such history, such beauty and such charm may well be remembered among the most pleasant mistakes of your life.