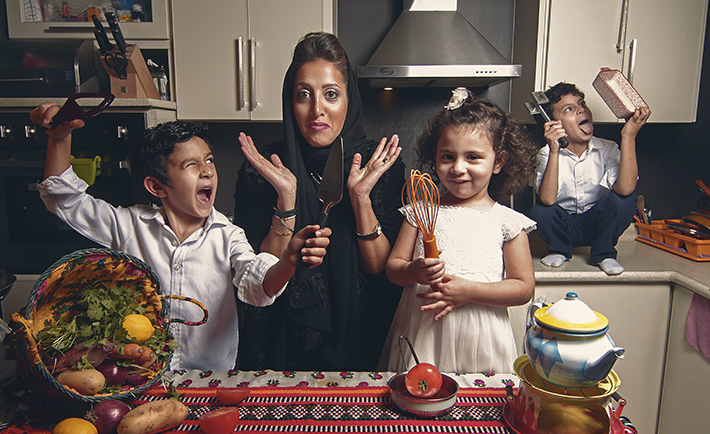 With the maker of Saudi Food with Eman comes a conversation with Eman.

Ever since Eman Gazzaz was young, as a diplomat’s child, she was always reminded that she is an ambassador to her country. A reminder that still sticks with her even when she’s in her cozy kitchen with her three kids attempting to contain the inevitable chaos.

With over 25,000 subscribers and almost two million views on her cooking channel on YouTube, Gazzaz is no ordinary working mom. With simple how to videos, she attempts to teach the world how to create authentic Saudi dishes. We’ll let you in on a little secret though… she’s not doing it just for the food.

Cooking always interested Gazzaz. Living and growing up in over seven countries, she was always exposed to food and diverse flavors. “I always felt I had a direction towards food, but I never knew that I really wanted to get into it.”

Before venturing into the culinary sphere, Gazzaz was, and still is, an artist with a number of international exhibitions under her belt. “The family was always into art in some way,” she explained. Both her mother and sister were artists. The de facto family business added another dimension when Gazzaz traded in her oil and canvas for some pans and veggies.

After finally living in Saudi for the first time as an adult, Gazzaz felt disconnected. “I felt like a minority in my own country.” That’s when opportunity came knocking in the form of a friend with an online cooking show visiting her from Morocco while on a one-month exchange program. The host of the newly established Cooking With Alia asked Gazzaz if she would be interested in being in one of her videos. Her viewers were interested in Saudi cooking, and Gazzaz saw that as her opportunity to ask, “What’s YouTube?”

The feedback from that one episode led to several collaborations between the two over the month. During that time when Gazzaz was acting as a culinary ambassador, she was also playing the role of an ambassador to her visiting friend. The two seemed so inherently similar that Gazzaz decided to open up the doors to her kitchen, and her family, to the rest of the world.

Her cooking show is best described as Saudi cuisine made easy. By choosing to teach in English, she had expanded the invitation into her home for anyone who is interested. “This is my home. These are my kids running around, and this is my kitchen.”