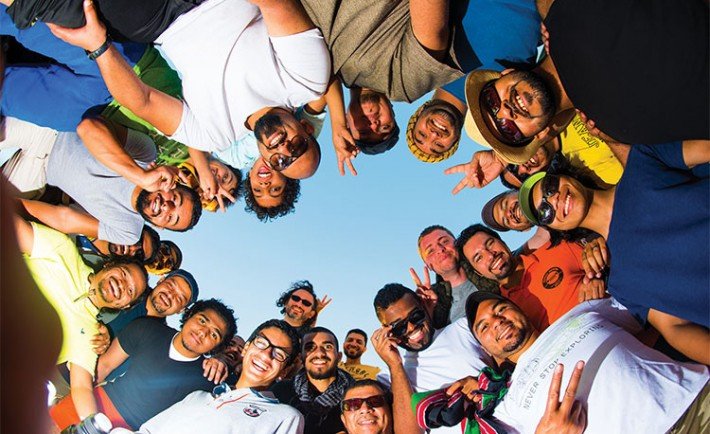 Check out their tour of Madain Saleh, Shaabaan Beach and more.

About Jeddah Jeepers: The team was founded in 2011 and has worked hard on exploring tourist sights around the Kingdom by Captain Sulaiman Al Butehy and Captain Qutaibah Mufti; it has expanded to include 22 members. Jeddah Jeepers has 12 exploration tours per year and three international ones. They also take part in social events and aid during disasters that may occur (i.e. rain floods, sandstorms, etc).

Number of Explorers During the Trip: 48
Number of Cars: 18

The tour was aimed at discovering several historical sights in the Kingdom. First they headed to Al Ees governorate to have the transcendent experience of stargazing. They also had fun visiting the Elephant Mountain, which obtained its special shape as a result of strong sandstorms over a thousand years.

They wandered around the labyrinths of Madain Saleh to absorb the ancient vibe and learn the secrets of the past. They then headed to the Hejaz Railway Museum to check out the train models and view all the pictures and replicas on display.

Later on, they headed to Al ‘Ula Village where they got an idea of what village life is all about. The village is 700 years old and has been restored to become a national heritage.

The Jeepers and their tourists finally headed to Shaabaan beach to relax by the crystal clear water and get some time under the glistening sun.

Head to their social media accounts for even more thrill.
Instagram: jeddahjeepers