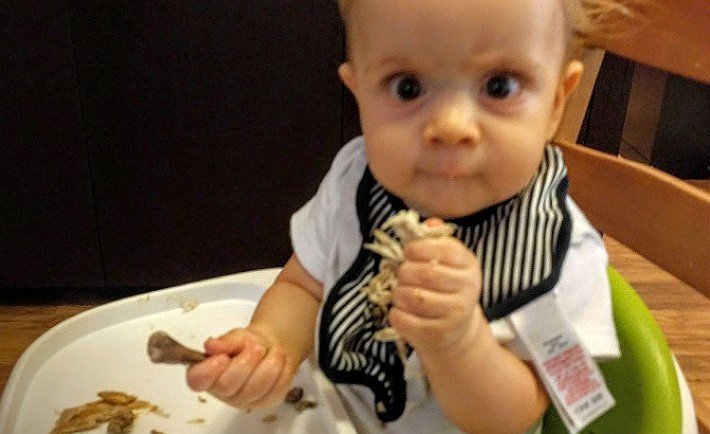 This is going to be a “why didn’t anyone tell us this before” kind of tip. Also, please keep in mind that your mileage may vary since, as with anything baby-related, each baby is different and will react and grow at their own pace.

At just about four months, Eisa was absolutely obsessed with watching us (especially his mother) eat. I don’t know that I can emphasize that enough. Eyes wide, mouth agape. You know how in cartoons they depict starving people hallucinating others turning into food? It was like that, but he was turning the food into just more food.

I, in my infinite wisdom as a baba of four months, quoted some of the online scriptures that said he was too young and to hold off solid foods until a month or so later.

I forgot the cardinal rule: each baby is different. I basically ignored what my little one wanted for that whole month until I finally gave in. Poor lil’ guy was so confused, frustrated and missing out on all that extra nutrition.

For the next two months after that, we tried the standard way of introducing new foods bit by bit, spoon-feeding him (or trying to) fruit and vegetable purees and so on. It was a crapshoot; sometimes he liked it and sometimes he refused. Also, it was pretty stressful.

I’m sure this is all sounding familiar to most parents. What we didn’t know was possible though was something my wife learned through a book called Baby-led Weaning. The author advocated giving your baby food that they can manipulate and work with their own two hands and ultimately feed themselves. Instead of pureed apple, give them apple quarters. Instead of boring ol’ mush, give her whole peaches (without the pit), carrot sticks, or, best of all: a meaty chicken drumstick. Eisa loves him some drumsticks. He’ll work through the meat and gnaw away at the bone for ages in the most adorable way.

Warning: This style of feeding is super messy! But, aren’t they all?

I know what you’re thinking because I still think it: isn’t he going to choke on those big pieces, or on the stuff he can’t eat? It’s the miracle of babies. They eat what they can and spit out the rest. I know it sounds too good to be true, but it amazes me every time I watch him eat a peach, for example. I give him the whole fruit, and he starts working his way through it (with only two bottom teeth to his name), eating chunks and spitting out the skin. With chicken, he’ll toss out the cartilage like it’s nothing. They have a very sensitive and defined gag reflex that protects them.

Granted, you really have to remember not to react negatively when they do gag and make odd noises; overreacting will scare the child, so trust in them and their body to do what’s natural.

Life is so much simpler and so much more enjoyable. He eats with us at meal time and, except for minor adjustments in spices and flavor, eats the same food as us. And we don’t have to manage each and every bite. We just put the food on his tray and he goes to town, holding pieces in both hands and stuffing his face like a pro.

Honestly, after witnessing him for the past month eating like this, I don’t understand how it isn’t common sense. Why be force-fed and spoon-fed boring stuff when you can eat at your own pace, with your own two hands, and enjoy every bite?

Also, a nomenclature note: it’s not weaning in the sense of stopping breastfeeding; it’s more a UK term in this case referring to adding solid foods. It’s really “Baby Self-Feeding”.

To learn all about it as we did, you have to get this book. It outlines everything you need to know, plus gives you a whole array of useful recipes. The Baby-led Weaning Cookbook: Over 130 delicious recipes for the whole family to enjoy by Gill Rapley and Tracey Murkett