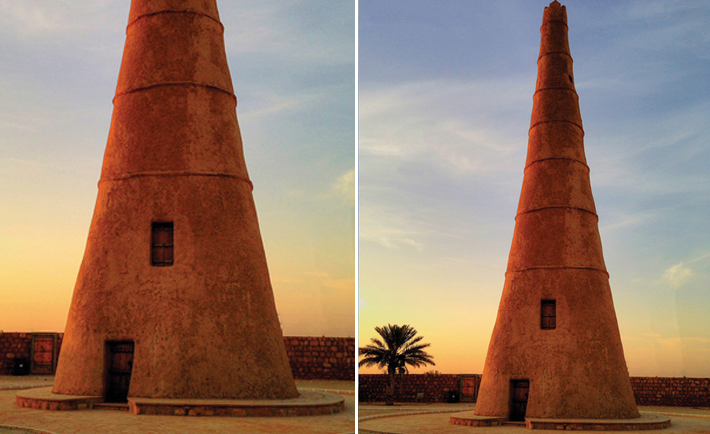 History found in places where one least expects them.

Al Qassim has always been acknowledged for its large volume of date production and the illustrious people that the land has given birth to, but behind the limelight of those two subtly lies the region’s history.

A prime example of its history is in the form of Ash Shanana tower, which is located just 7 km from the center of the city of Al Rass in Al Qassim’s heartland. Standing at a height of 27 meters, the conical tower has become a mini-tourist landmark.

Built as a watchtower, the structure is largely made of a mixture of mud and straws from palm trees. The mixture is believed to have been left to dry under the sun following which one layer after another was added to complete the tower.

Historians have multiple opinions on when the tower was actually built with reports ranging from anywhere in between 1699 AD to 1817 AD. So by even the most conservative of estimates, it is at least 200 years old.

But what’s most remarkable about it is that it there have been so many battles fought in and around it and it has somehow managed to survive through them all. Most of these battles were between the Saudi State and the allies of the Ottomans. During one such battle, the tower was under massive artillery fire and it is believed that due to this it has reduced from its original height of 45 meters to the nearly 27 meters that it stands as of today.

The last of such battles to take place was in 1904 AD between King Abdulaziz’s forces and his adversaries from central Arabia. Despite all the battles that happened around it, Ash Shanana tower has literally stood the test of time and it stands with stories of numerous battles to tell to curious travelers.