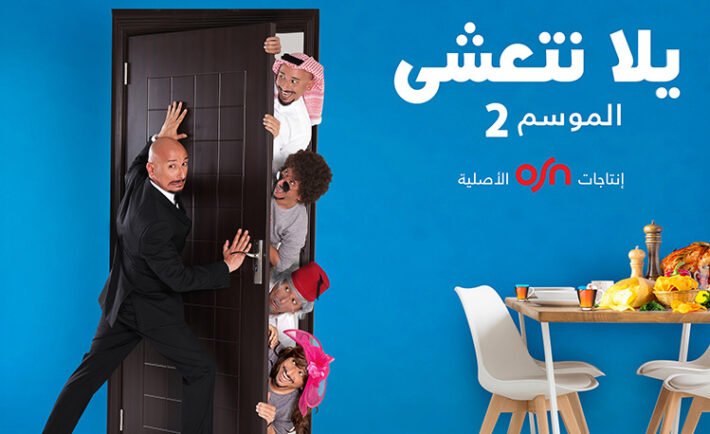 April marks the 10th Anniversary of one of the biggest ever TV shows – Game of Thrones’ Iron Anniversary, and OSN is giving viewers the chance to go back to where it all started with a daily double bill on OSN Series.  And that’s not all, from E! Live from the Red Carpet and Mare of Easttown to OSN Original’s first Arabic psycho-thriller Qayd Majhoul, viewers will be spoilt for choice. OSN Mezze will present three cooking shows to get you into the Ramadan spirit including the much awaited second season of Yalla Net’asha, the Arabic version of Come Dine With Me.

OSN Ya Hala Cinema brings on April 3rd at 23:00 KSA Youm El Dine, a new and exclusive Egyptian Adventure, Comedy, Drama movie, which follows the adventures of a middle-aged Coptic leper named Beshay and his young Nubian friend, Obama, as they travel across Egypt in an attempt to reconnect with his family.  Staring Rady Gamal, Ahmed Abdelhafiz, Osama Abdallah (and directed by A.B. Shawky), this challenging and heartwarming film won 8 awards at leading international festivals including Cannes Film Festival (2018).

OSN Original’s Qayd Majhoul continues in April with its last two episodes, on OSN Yahala Al Oula. The Syrian psychological thriller sees two parallel and seemingly separate stories becoming increasingly entangled. The first thread highlights the investigations of two high profile murders led by police major Khaldoun. The other branch of the plot revolves around Samir, a poor tailor and taxi driver who is experiencing a wave of financial misfortune and on the brink of mental collapse. Before he falls into complete despair, he reunites with his old friend Yazen who has returned to Syria to look for Samir after many years. The story gets twisted after Samir becomes a prime suspect in the murders and Yazan disappears. All episodes of this 2021 series, starring Abdulmenam Amairi, Basil Khayat, and Nazli Alrawas, are also available on OSN Streaming App.

For the past 14 years, The Kardashian/Jenners have shared their lives with the world and made an undeniable impact on pop culture through Keeping Up with the Kardashians. As the show comes to its final season, the family is faced with life-changing decisions about their future while navigating a world changed by a global pandemic. From the thrill of new babies and cross-country moves, to the heartbreak of fractured relationships and difficult farewells, join the family on E! from Sunday 28th March at 20:00 KSA on one last journey as they figure out what comes next for them and close out this chapter of their lives.

The highly anticipated second season of OSN’s very own award-winning Original Production Yalla Net’asha (Come Dine With Me) returns at 20.00 (KSA) on 12th April on OSN Mezze, as well as on OSN Streaming App. Each week four contestants will take turns hosting each other at their houses for a dinner party where they have prepared a three-course dinner over four consecutive nights.  Guests will then secretly rate the evening out of ten with the top scorer revealed at the end of the week and the victor wins a monetary prize.

April 17th sees the launch of Taste the Nation, a food show at 19.00 KSA on OSN Mezze as award-winning cookbook author Padma Lakshmi embarks on a journey across the United States, exploring the rich and diverse food cultures of various immigrant groups and seeking out the people who have shaped what American food is today.

Mary Berry’s Simple Comforts returns to OSN Mezze on April 6th at 17.30 KSA as Mary explores the wonderful world of simple comfort food, bringing fuss-free recipes that can warm the soul and lift the spirits.

My Greek Odyssey (Season 2) starts at 21.00 KSA on 8th April on OSN Living. This season, Peter journeys to the Northern Aegean and Western Cycladic islands where he digs deeper into the fabric that makes Greece so unique, meeting remarkable characters along the way.

The Fixers is also returning for a second season on April 23rd at 19.00 KSA on OSN Living.  A team of experienced builders travel to remote locations to complete life-changing projects, from bringing electricity to an orphanage to providing a reliable source of fresh water for a community.

Tune in to the newly announced content line up, OSN Woman, to access a large variety of lifestyle shows and movies covering a broad range of topics ranging from fashion, health, parenting, relationships, and reality shows.

How It Feels To Be Free (7th April) is the inspiring true story of how six iconic African American female entertainers challenged an entertainment industry that is deeply complicit in perpetuating racist stereotypes and transformed themselves and their audiences in the process.

Very Ralph (14th April) is the first documentary portrait of fashion icon Ralph Lauren, revealing the man behind the icon and the creation of one of the most successful brands in fashion history.

Public Figure (21st April) is a documentary that investigates the psychological effects of everyday social media use while exploring how our influencers deal with the fame, money, hate and obsession that comes with it.

Secrets of the Royal Wardrobe (28th April) explores the design and creation of the royal wedding dresses that have captured the public’s attention for decades. Includes interviews with designers and Royal style tips.

Also, Project Runway returns to OSN at 20.00 (KSA) on 5th April where the show focuses on sixteen fashion designers competing to become “The Next Great American Designer”.

Bad Boys For Life premieres on April 2nd at 2100 KSA. Marcus and Mike are forced to confront new threats, career changes, and midlife crises as they join the newly created elite team AMMO of the Miami police department to take down the ruthless Armando Armas, the vicious leader of a Miami drug cartel. Top class buddy movie action!

Stay entertained this April with new Series on OSN Series First, your first window to all the latest drama and action series from the biggest studios, straight from the US. All series will also be available to catch up on OSN Streaming App.

Visit osn.com for more information on scheduling and much more.