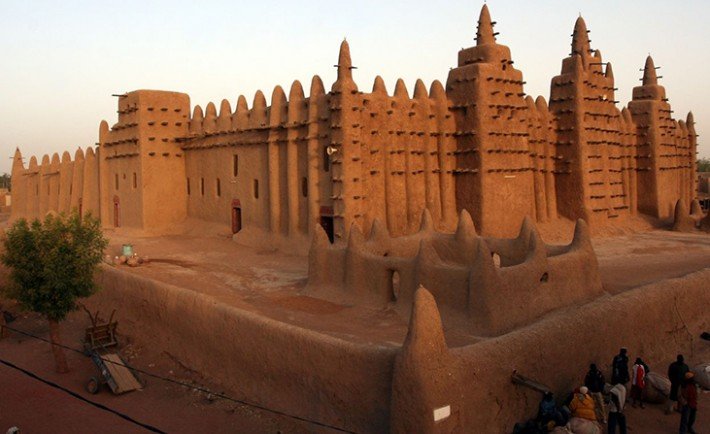 Africa, the land once considered to be the last unexplored continents in the world has deep-rooted Islamic history. Islamic architecture took a new fold here, with indigenous construction techniques and artwork heavily employed in mosques, madrassahs and other Islamic structures.

The mosques here are not so colorful, nor are filled with glass panes like those in Iran or covered with intricate tile work like those in Central Asia, but rather they evoke something more subtle in a way that keeps the main purpose of the structure, which is spiritual contemplation to reflect in every aspect of the architecture. Take a look at these exquisite photos of some of the finest mosques in Africa.

The Great Mosque of Kairouan, Tunisia

Sitting in the UNESCO World Heritage city of Kairouan, the mosque is one of the largest Islamic monuments in all of North Africa. It was set up by the Arab general Uqba ibn Nafi in 670 AD, and hence at times, the mosque is also referred to as Uqba Mosque after the founder.
Spread over a surface area of 9,000 sq.m, the mosque is a masterpiece of Islamic architecture. It has been used as a model for many later mosques all across the Maghreb region. The mosque forms a great basis of the urban fabric of the city of Kairouan and served as a major learning center, not just for Islamic studies, but for sciences as well. 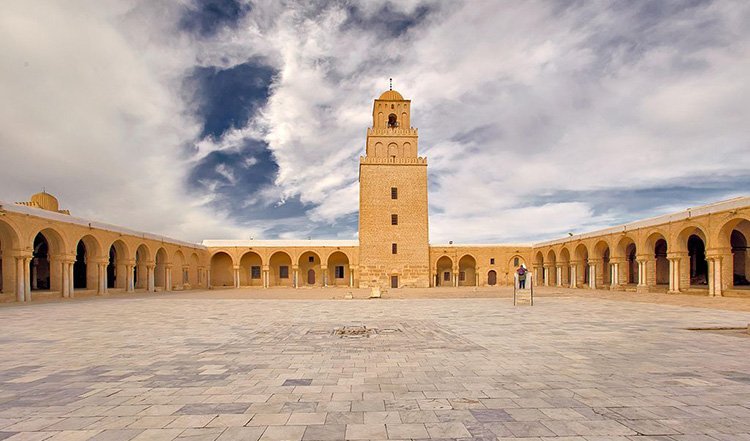 Considered by many architects to be the epitome of the Sudano-Sahelian architectural style, it is one of the most famous mosques in the world. Though the mosque has a history that dates back several centuries, the present structure dates back to 1907 AD.
Since the construction of the present structure, it continues to hold on to the title of being the largest mud brick structure on the planet. While many historic mosques across Mali have given way to modernization, the Great Mosque of Djenné has resisted it, to much of an extent mainly due to the support from the citizens, thereby retaining much of its historical value. There is even a replica of the mosque known as the Mosquée Missiri in the French town of Fréjus. 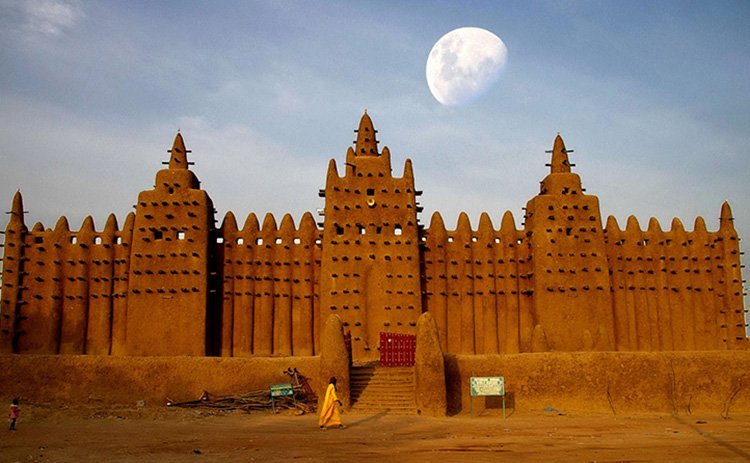 Though there are many mosques that have been funded by Saudi Arabia in Africa, this mosque is amongst the most noticeable ones. It sits near the Presidential Palace in the heart of the Capital, Nouakchott. 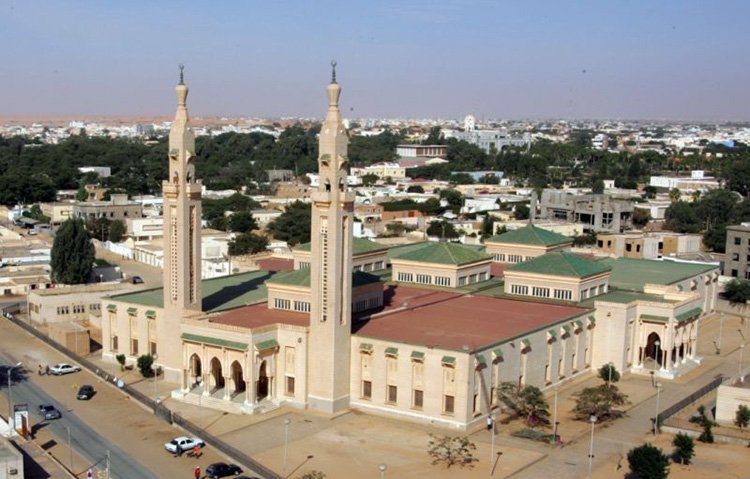 Located in the oasis city of Chinguetti, this ancient mosque is believed to house one of the oldest minarets in continuous use on the continent. Its square minaret is its most noticeable feature that highlights the unmortarted, split stone masonry prowess, the locals had developed. One will find the mosque to lack much adornment, but it is in its simplicity that its beauty lies. 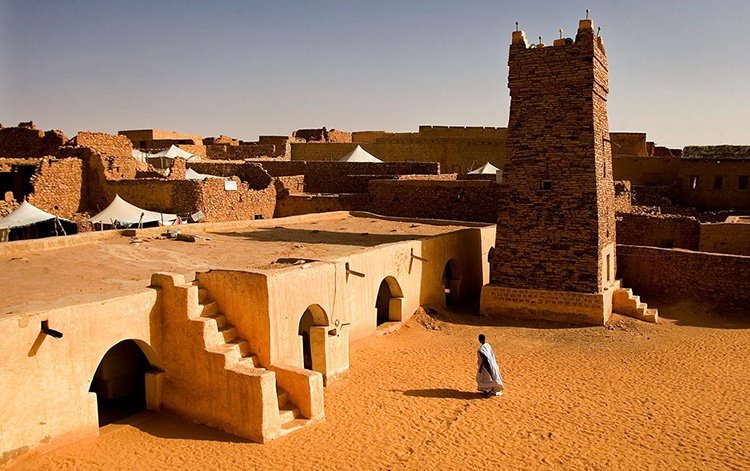 Housing one of the largest Muslim populations in Africa, Nigeria houses one of the continent’s most popular mosques that is also at times referred to as the Nigerian National Mosque.
The striking golden dome and the minarets that adorn all four corners of the mosque dominate Abuja’s skyline. The mosque with its architectural finesse and grandeur symbolizes the growing wealth the oil-rich nation is witnessing. 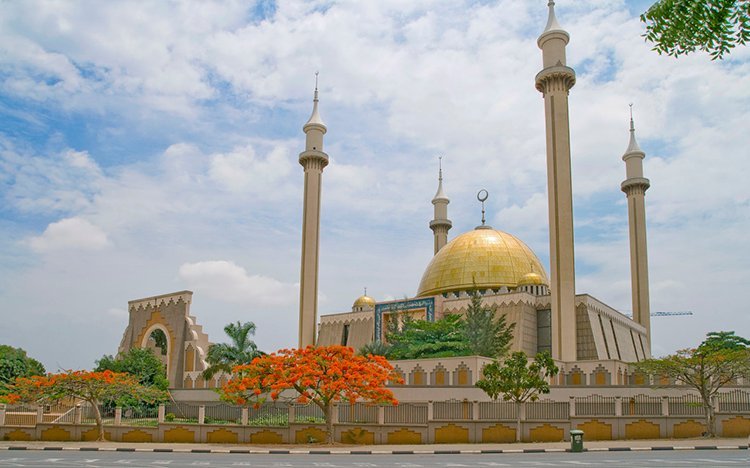 Commissioned by Muhammad Ali Pasha, this 19th century mosque sits on the summit of a citadel in Cairo. The mosque rises from the skyline of Cairo and is one of its most noticeable monuments that can be seen from far and wide.
Also known as the Great Mosque of Muhammad Ali Pasha, it was made by the Pasha in memory of his oldest son, Tusun who died in 1816. Unlike other major mosques across North Africa that carry heavy influence from Arab architecture, this mosque carries heavy resemblance to Ottoman mosques. This can be seen in its archetypical Ottoman minarets, and a central dome that is surrounded by other small and semicircular domes. The Albaster mosque was modeled after the Yeni mosque in Istanbul. 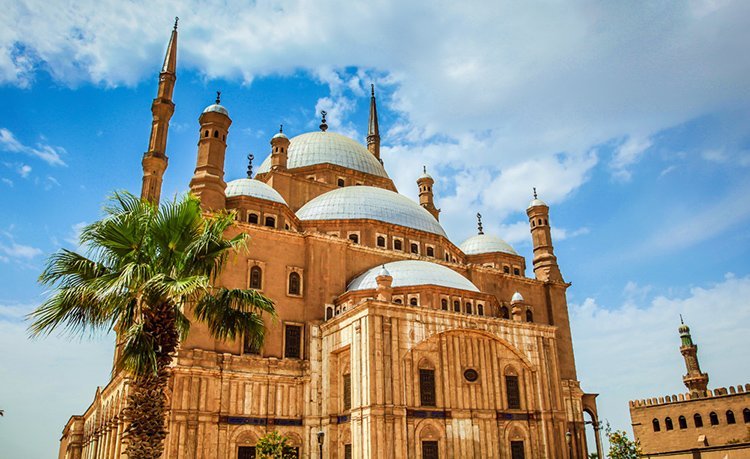 Bedecked with pointed merlons, curved windows, decorative arches, this mosque’s splendor never fails to impress. Adding to its aesthetic value are the gardens that adorn the piazza. The mosque was built by the Al Mohads, who in the city of Marakkesh built this mosque that was accompanied by a towering minaret. The mosque went on to inspire other structures like the Hassan Tower of Rabat and the Giralda of Seville in Spain.
To build the mosque, craftsman were brought in from Andalusia, who brought with them novel ideas and construction techniques that made this mosque a forerunner in Moroccan-Andalusian architecture. Another noteworthy feature of the mosque is the exquisitely crafted mimbar that is made from sandalwood and ebony and carries ivory and silver inlay work. 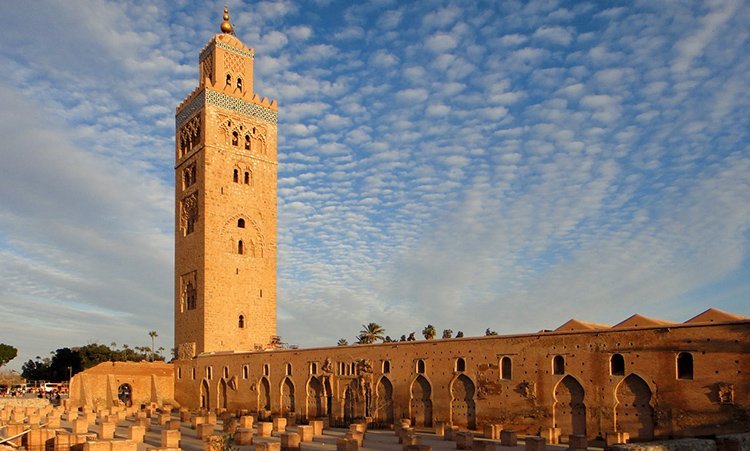 Founded in the town of Touba in 1887, the mosque is the largest building in the city with a total capacity of around 7000 worshippers. A salient feature of the mosque are its domes, some green and some blue; as opposed to having a unified color that is seen in other mosques around the globe. Its central minaret towers over the other four minarets that stand on each four corners that add to its stately façade. 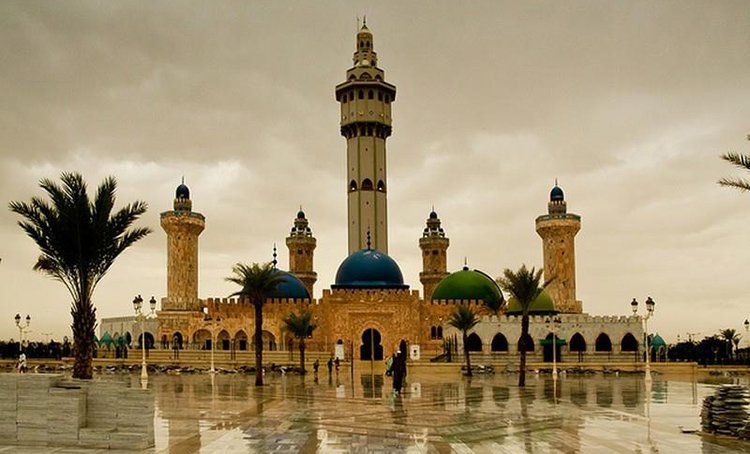 Built in 1982, the Canary Grand Mosque is truly ‘grand’ as its name, with a total capacity of around 12,500 worshippers. The construction of the mosque was significantly funded by King Fahd. 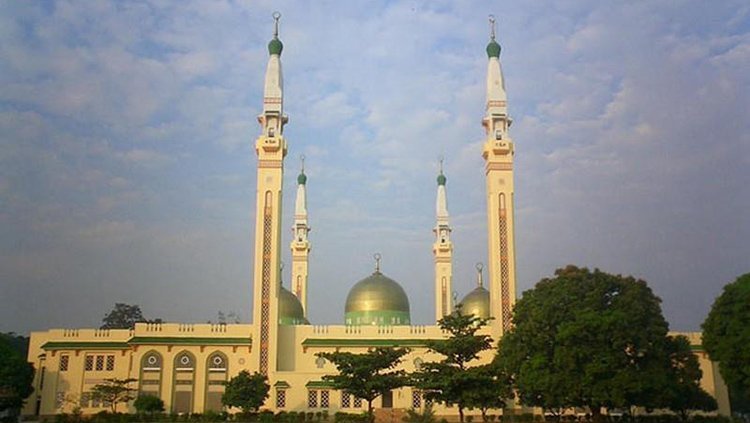 It is believed to be the largest mosque in the southern hemisphere. Its construction was completed fairly recently in 2012 and the basic plan of the mosque was adopted from the 16th-century Selimiye Mosque in Turkey.
The dome is patterned with Turkish art and authentic Turkish ceramics and calligraphy adorn the walls inside. The mosque also serves as a community center with its several halls and facilities and a university is also being built on site that will facilitate Islamic education. 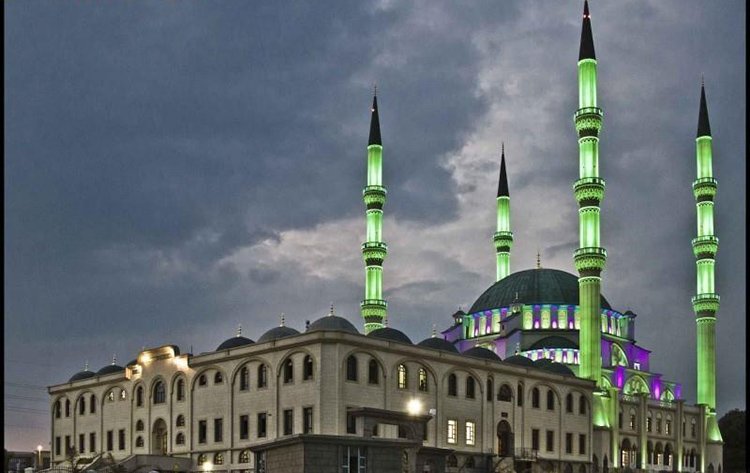 Built in the historic city of Constantine, the initial seeds of the mosque were planted way back in 1968; however it was not realized until the 90s and was finally constructed in 1994. Boasting a total capacity of over 10,000 worshippers, it is the most imposing monument in the city with its 107m high twin minarets piercing the landscape. The place is also home to Algeria’s first modern university. 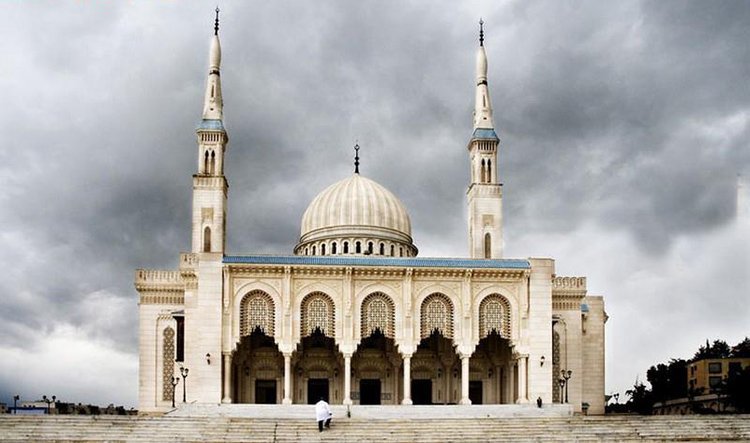 Completed in 2006, the mosque can accommodate up to 15,000 worshippers. It features regularly in Ugandan tour itineraries and is one of the biggest attractions in the country. Tourists are often seen climbing to the top of the minarets from where they can get beautiful vistas of the city of Kampala. 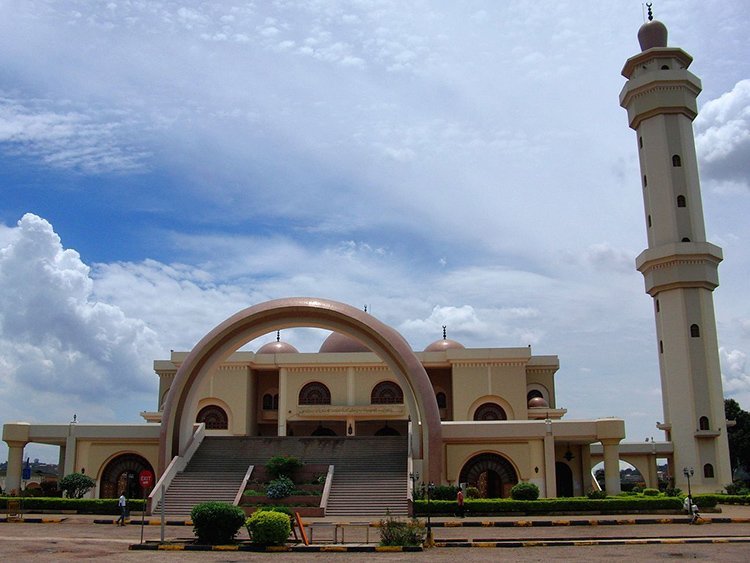 The Mosque of Islamic Solidarity, Somalia

The largest mosque on the horn of Africa, it was constructed with financial support from the Fahd bin Abdul Aziz Al Saud Foundation. Overlooking the vast Indian Ocean it is one of the most iconic buildings in the country today. 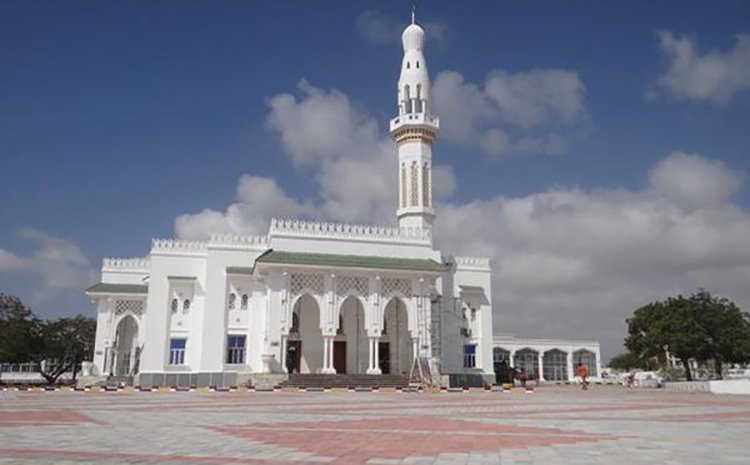 Sitting just opposite to the confluence of the two Niles, the Al-Nilin Mosque was built in the 70s. Carrying an unconventional and rather modern appearance, the design for the mosque was conceived by students of the University of Khartoum. 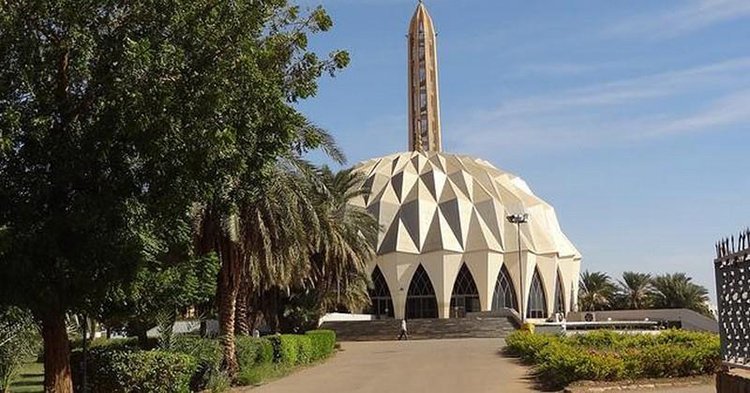 The Great Mosque of Algiers, Algeria

One of the last remaining examples of Al Moravid architecture, this mosque in the country’s capital was built almost a millennium ago in 1097 AD. The Great Mosque is believed to be the 2nd oldest mosque in Algeria.
The façade after subsequent renovations carries a portico of columns and poly-lobed arches. Inside, the prayer hall is divided into eleven naves; each nave crowned by Moorish arches. The rectangular courtyard has an exquisite riwaq (gallery) that runs across it.

Said to be the first mosque in Africa, the mosque is believed to be constructed at the site where Amr Ibn el-As (RA)’s tent was set up. It served as a major Islamic learning center long before even El-Azhar was constructed. The original structure was a simple rectangle, 29 meters in length by 17 meters wide and as subsequent rulers came, several additions and renovation works were carried out. Though none of the original parts of the mosque remain today, it continues to intrigue tourists with its subtle elegance. 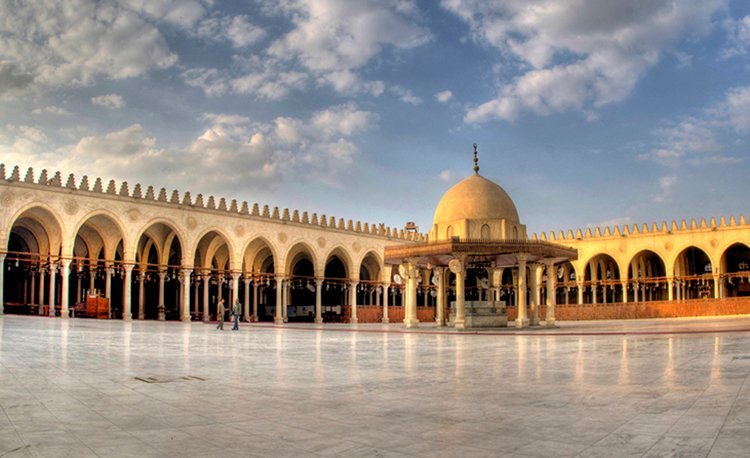 Often referred to as the largest mosque in Africa, this mosque can host over a whopping 100,000 worshippers. Designed by French architect Michel Pinseau, the mosque is heavily inspired from other historic Moroccan and Andalusian mosques. It took 7 years, 6000 workers and around 800 million USD, to complete this colossal mosque.
An idiosyncratic characteristic of the mosque apart from its size is the fact that it sits on a platform in the Atlantic Ocean. The beautifully crafted minaret at 689 feet is said to be the tallest structure in Morocco and in the night a light beams from it pointing towards Makkah. 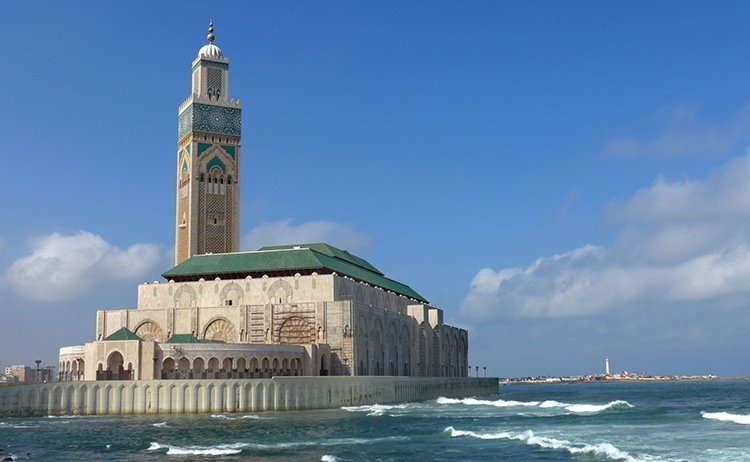