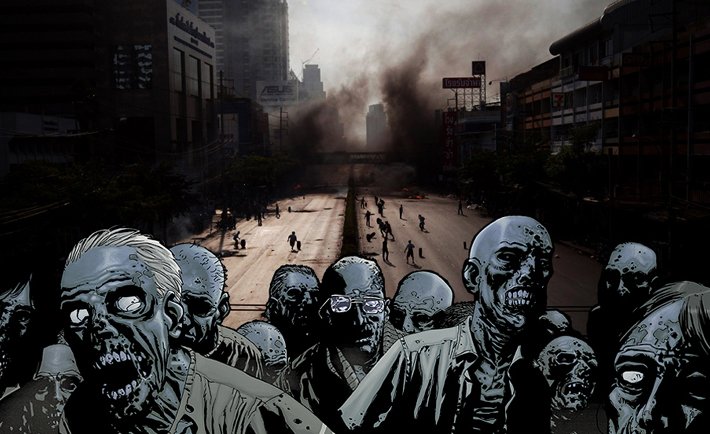 1.You know how zombies are basically reanimated dead bodies? And you know how bodies get rigor mortis when they’re dead?

Yeeeah… The fences of our houses are so high, their arms will fall off before they ever even turn zombie. Plus, 80% of our windows have either bars or shutters, so blam! We’re better protected than the CIA headquarters! Well, not really. But still, though, we’re pretty safe.

2. Riyadh is so hot, the zombies would decompose before they ever got to you. Because, again, they’re dead bodies.

3. There’s so many malls and supermarkets, you’d never starve to death.

Tallahassee’s twinkie craving would be satisfied in a second because all he’d have to do is walk a step and slam into a mall that has an arsenal of food. Then you have the predilection of Arabs to stockpile food, so we’re all set!

4. Our social bubbles -large as they may be- are still pretty limited so contact is so minimal that the infestation probably won’t get far anyway.

And traveling is mostly by car so as long as we keep using hand sanitizer and don’t visit IKEA on the weekends, we should be safe.

5. Speaking of cars, zombies will probably end up being road kill on our streets the moment they step on them. HAH! High accident rates apply to you too, stupid brain munchers!

And luckily Riyadhis seem to be thinking safely and buying loads of jeeps and fourwheelers for ultimate zombie whackamole. All I’m saying is, if you’re in King Fahad Road and you’re stuck in your little fancy Lexus, you’ll be hopping out and hailing the nearest truck soon enough.